It’s been approximately seven days since the Internet had a flame war with itself over Lena Dunham’s (somewhat inexplicably) polarizing Girls. We guess everyone got tired of complaining about how the show doesn’t realistically portray each viewer’s special-little-snowflake life experience…you know, the way that every other television show does? (God, do we long for the days of those great realistic docudramas about single, successful friends of various ethnic backgrounds and class, like Seinfeld, or Friends, or Sex and the City, or Breaking Bad.)

Luckily, our drought of Girls criticism is over, thanks to comedians Peter Moses and Frank Cappello. These young men were brave enough to create Boys; a parody of very smart, well-written comedy, which–no joke–is not an easy thing to do. So rats off to ‘ya, boys. Here’s Boys.

Okay, so they lay it on pretty thick with the “children of famous people” joke, and it’s not really fair to satirize Girls by implying that the characters all hang out in the city doing really cool things and living in “incredibly artistic” apartments, unless you count going to abortion clinics/jobs interviews while living in a two-bedroom in Greenpoint as “really cool” and “incredibly artistic.”

That being said, we would certainly watch Boys if it was real.Though isn’t The League already a show? 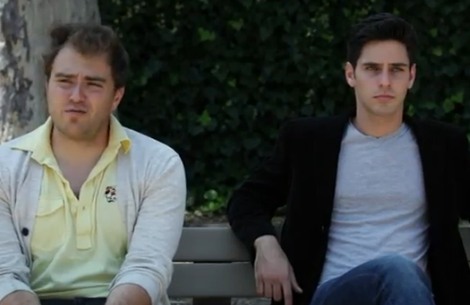