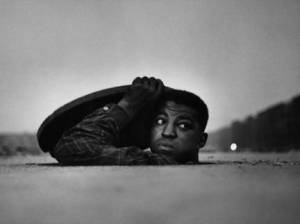 Howard Greenberg Gallery has announced two exhibitions of work by Gordon Parks, who would have turned 100 this year. One is “Contact: Gordon Parks, Ralph Ellison and ‘Invisible Man,'” curated by artist Glenn Ligon, and the other is “Gordon Parks: Centennial.”

The photographs in the first show look at a series of photographs Parks took on the occasion of the publication of Ralph Ellison’s first novel, Invisible Man. Many were first published in Life magazine.

In a statement, Mr. Ligon said,“The photos for ‘Invisible Man’ veered back in forth between an attempt to illustrate some of the feverish scenes in the novel and the ‘reality’ of Harlem, which Parks had tried to document in his previous work. Indeed, many of the photos in the exhibition were seemingly created in relationship to Parks’ photo assignments in Harlem, not as illustrations for the novel, although it is hard to distinguish between the two. It is the tension between these motives—to illustrate a fiction and to document a reality—that is the basis of this exhibition.”

The second show will survey some 40 works spanning five decades of Parks’s career starting in the 1940s. Both exhibitions will be on view from September 14 to October 27.