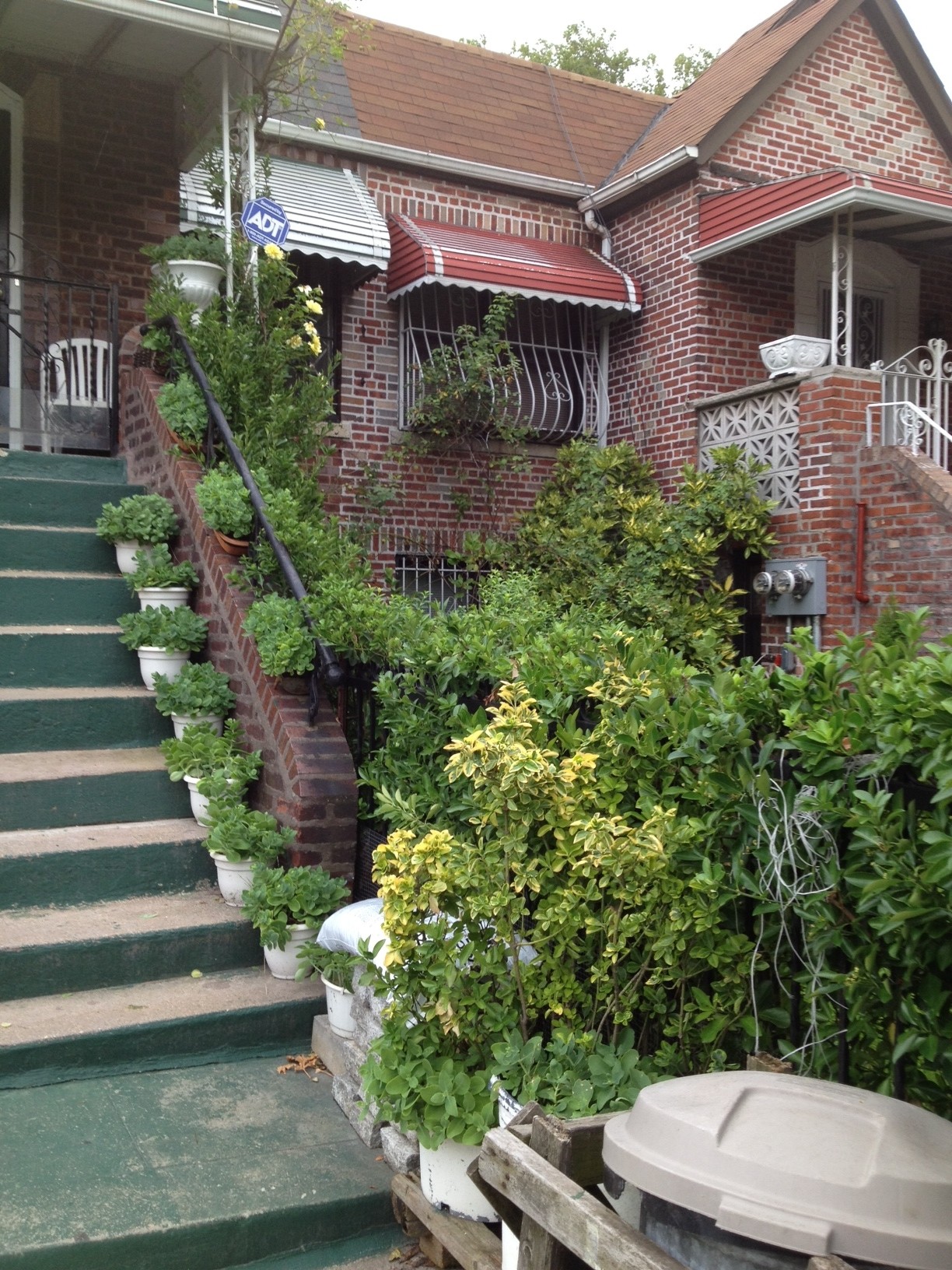 East 49th Street in Flatbush had some really impressive greenery. But the entire block was not equally verdant. (Kim Velsey) 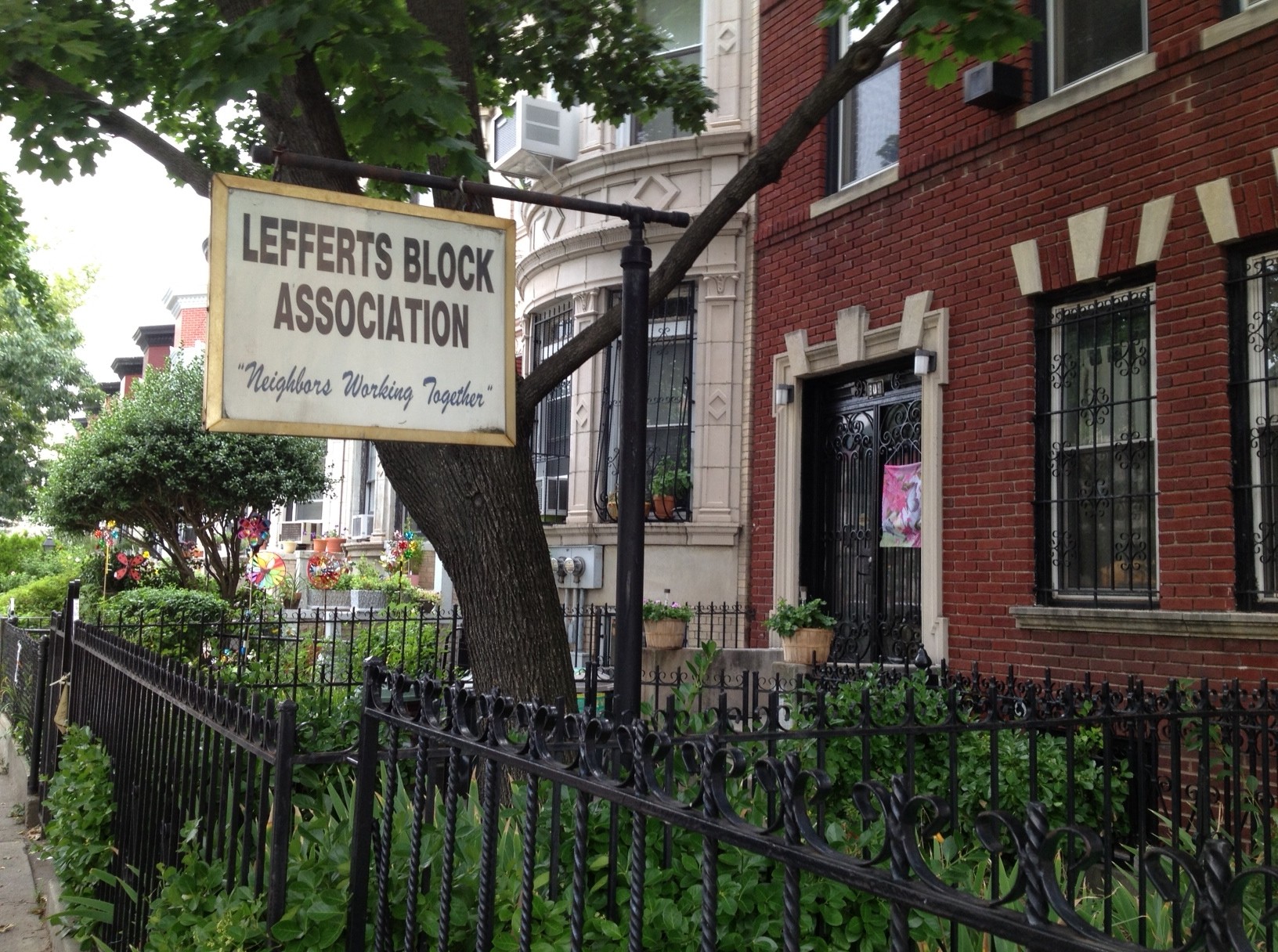 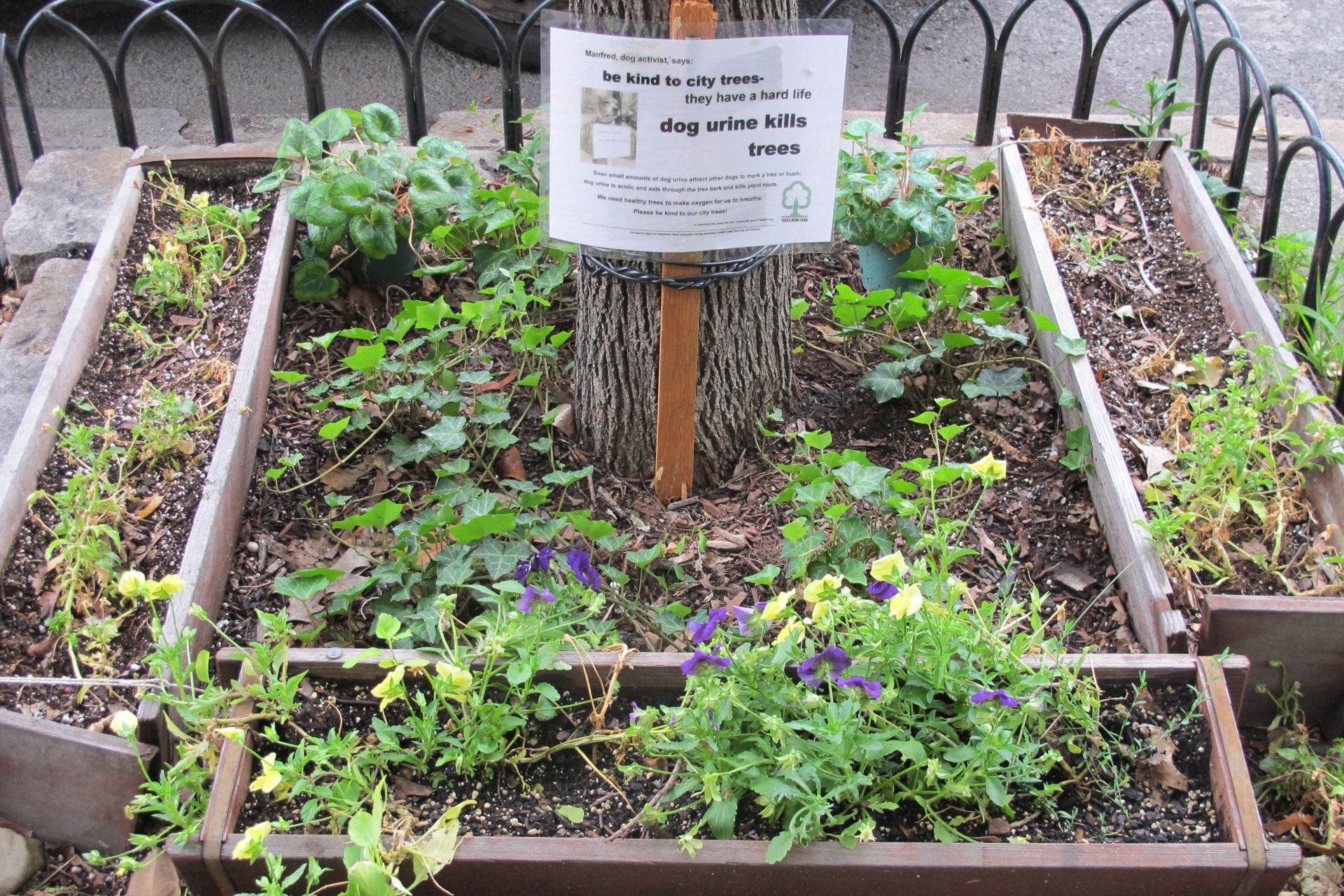 Lefferts Avenue was aggressive with their signage. (Brooklyn Botanic Garden) 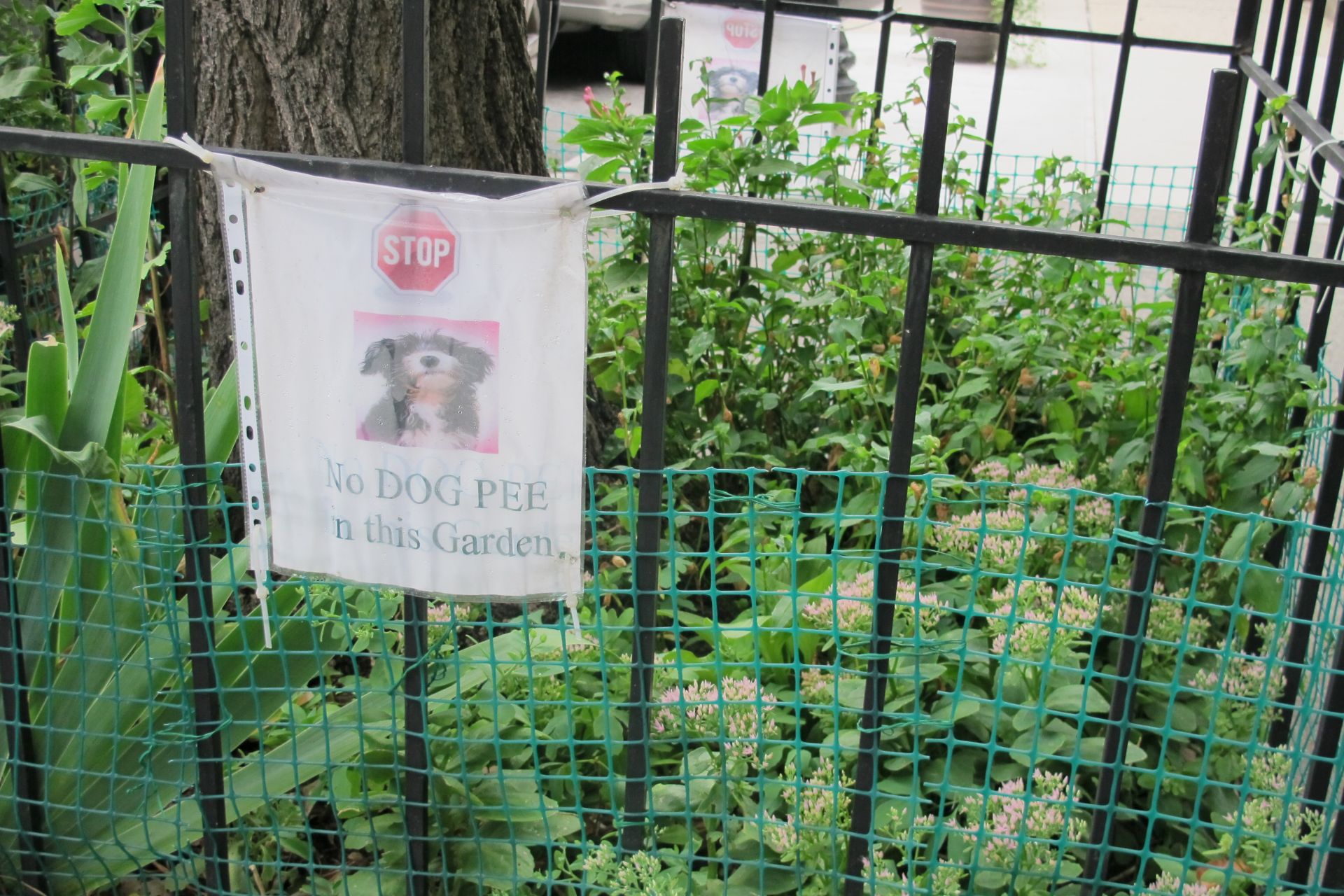 They also had a variety of riffs on the familiar "curb your dog" refrain. (Brooklyn Botanic Garden)
Advertisement 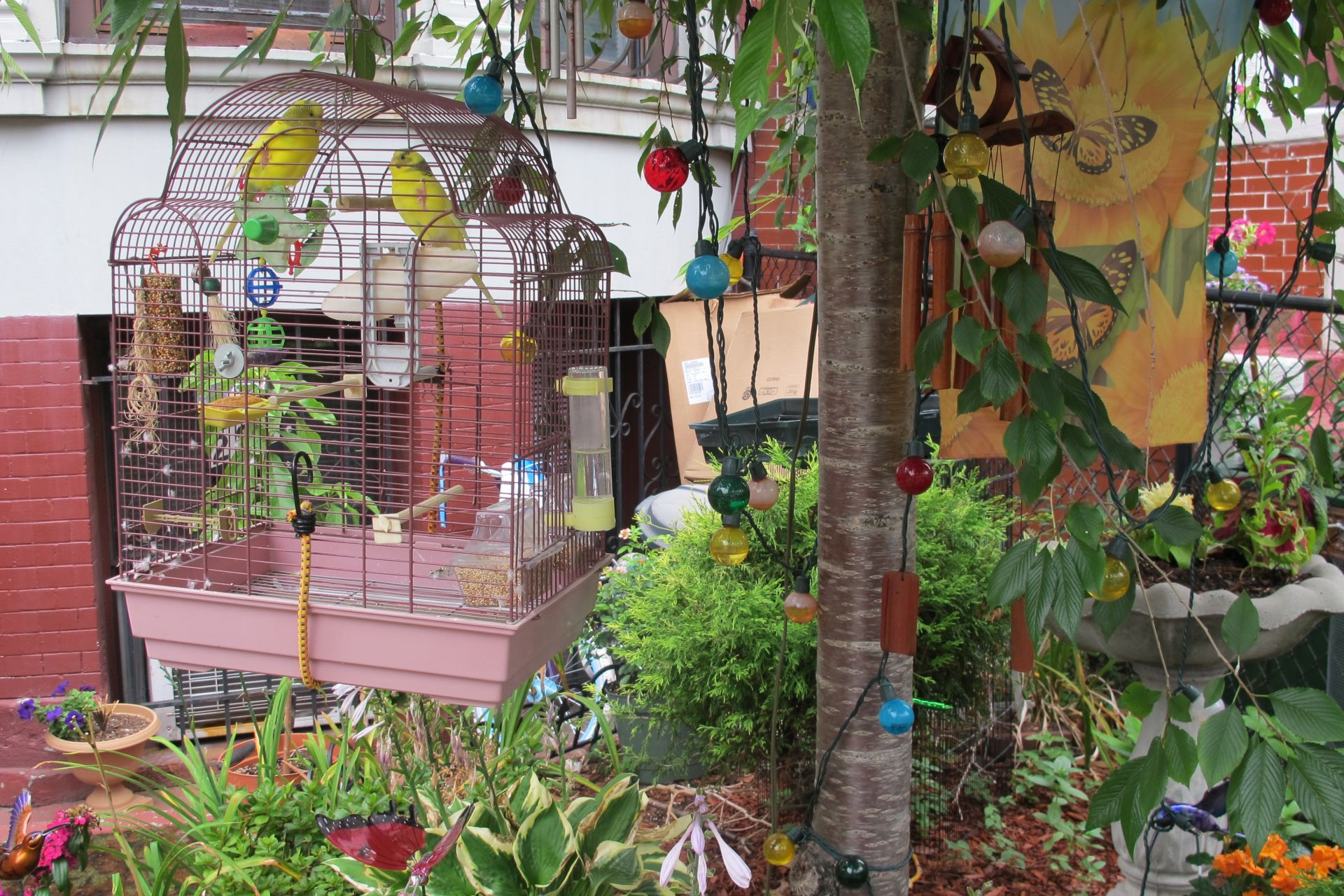 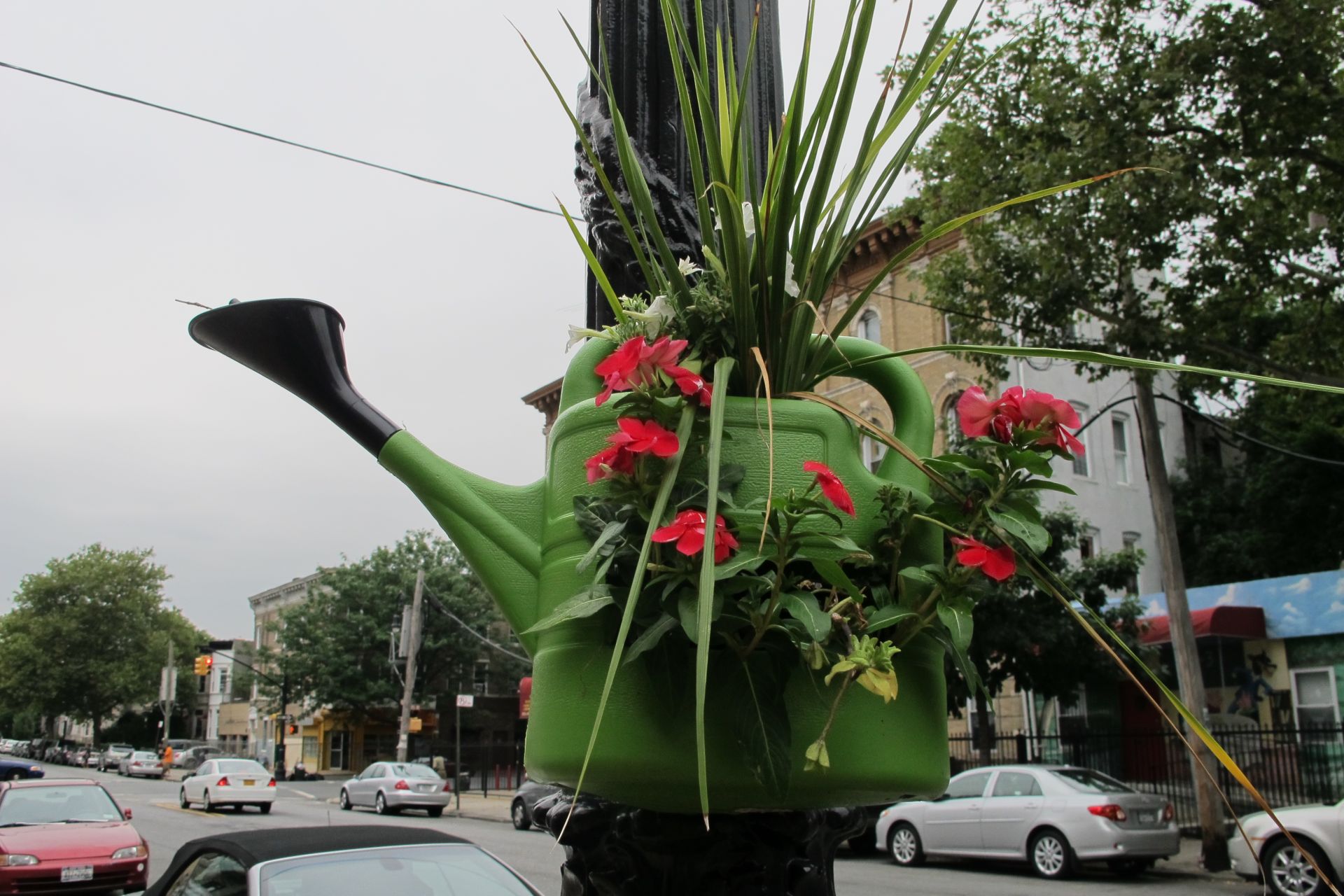 Residents say that despite a problem with ongoing vandalism, the neighborhood seems to be appreciative of their efforts. Some people have even re-routed their paths to the subway in order to walk the block. (Brooklyn Botanic Garden) 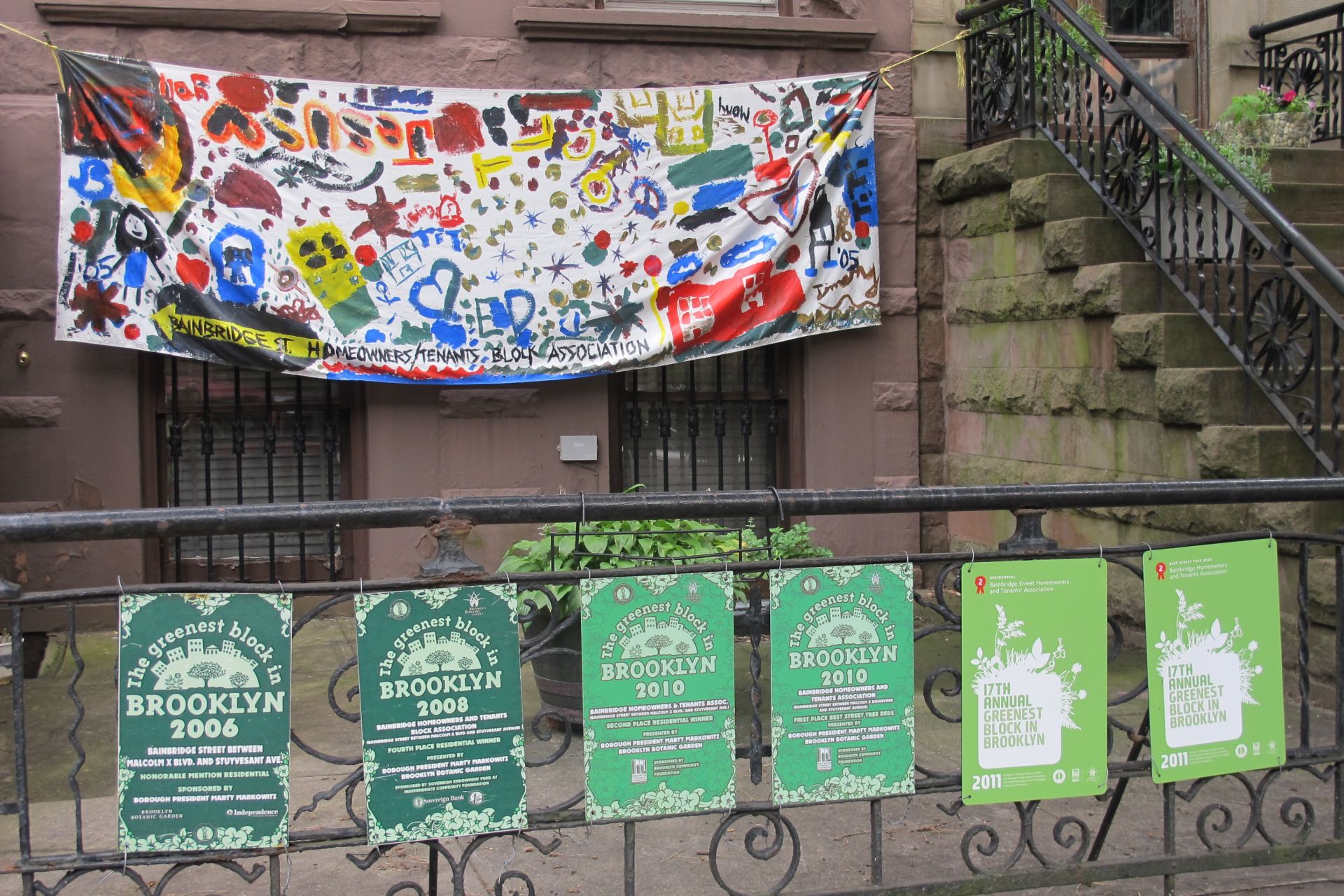 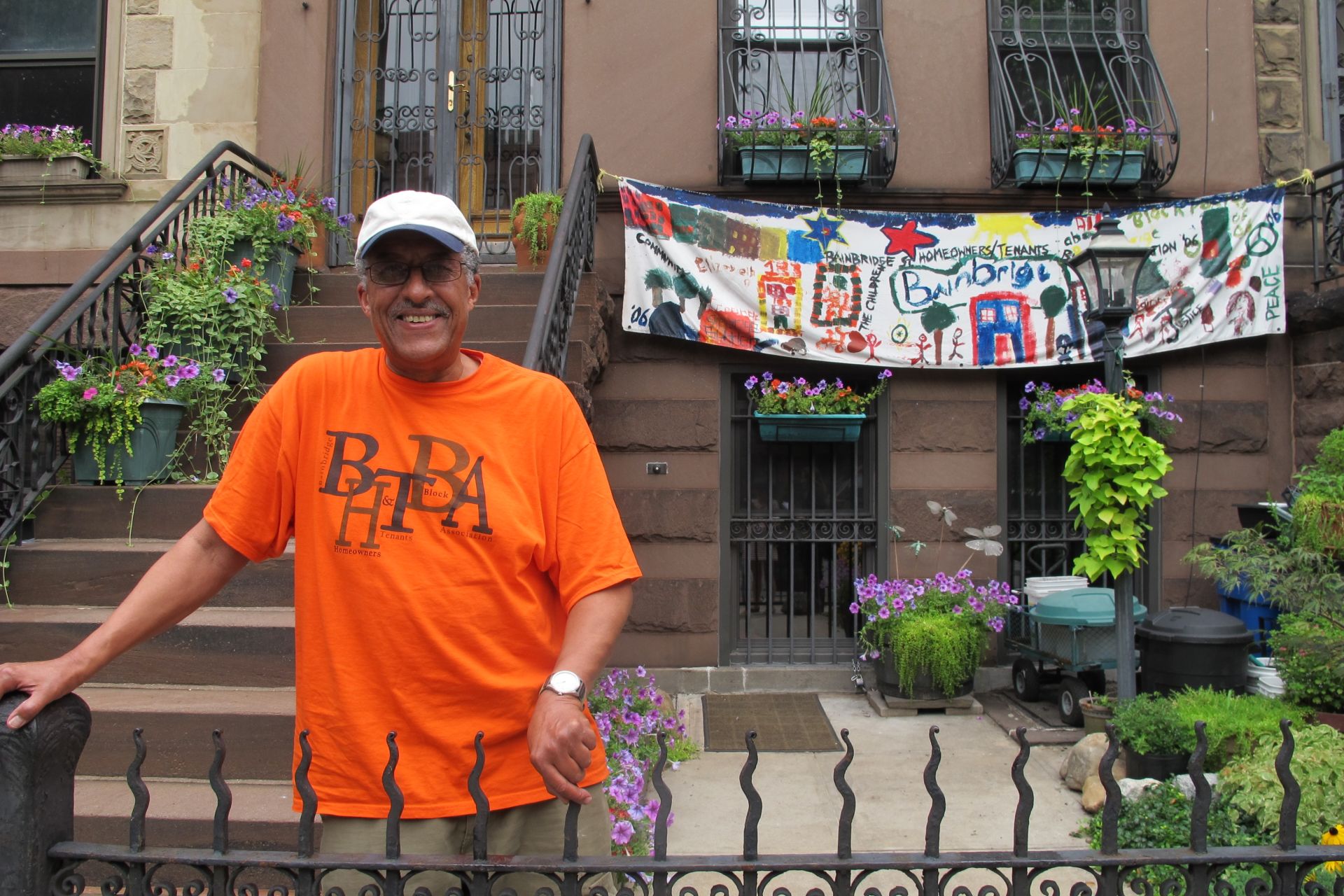 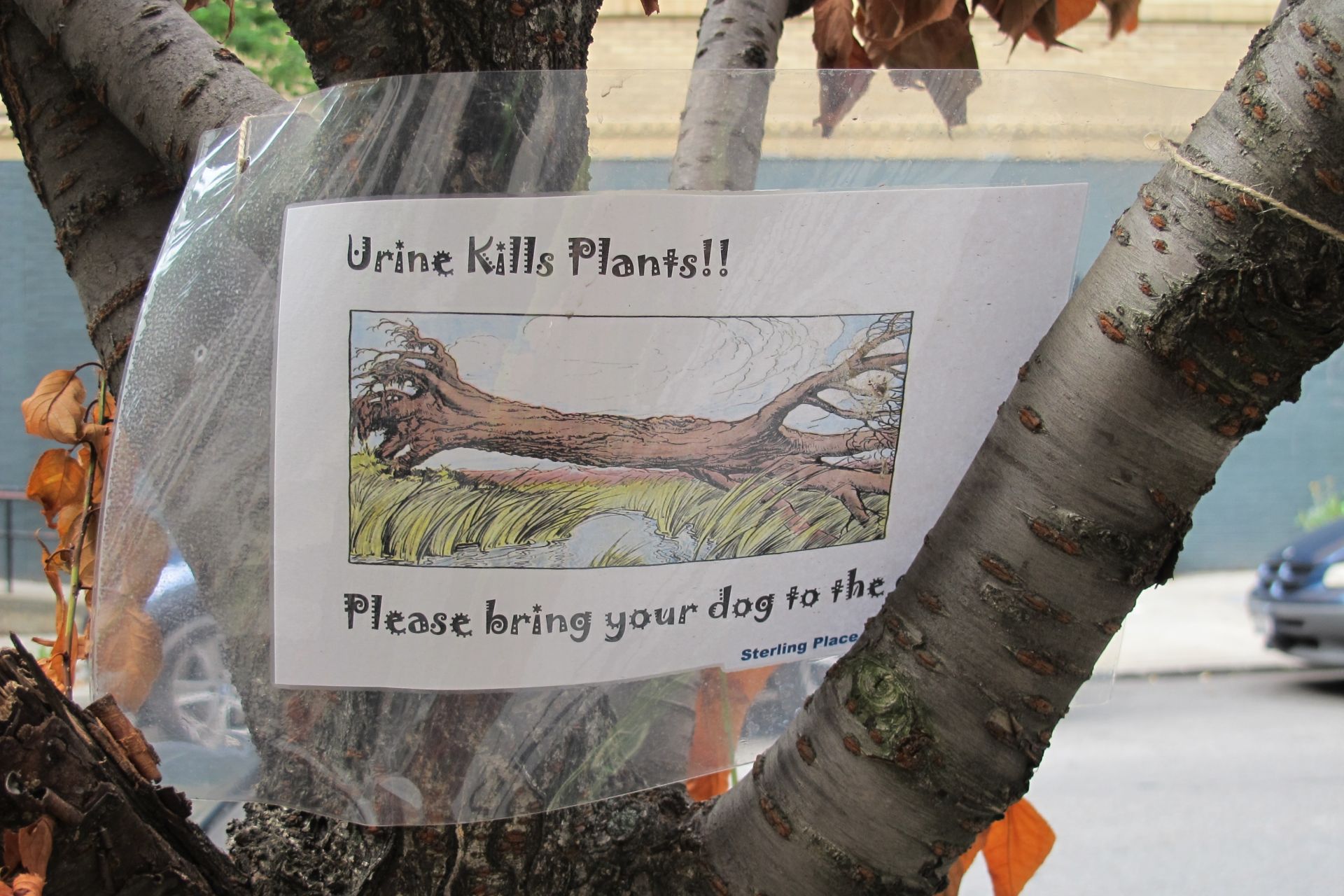 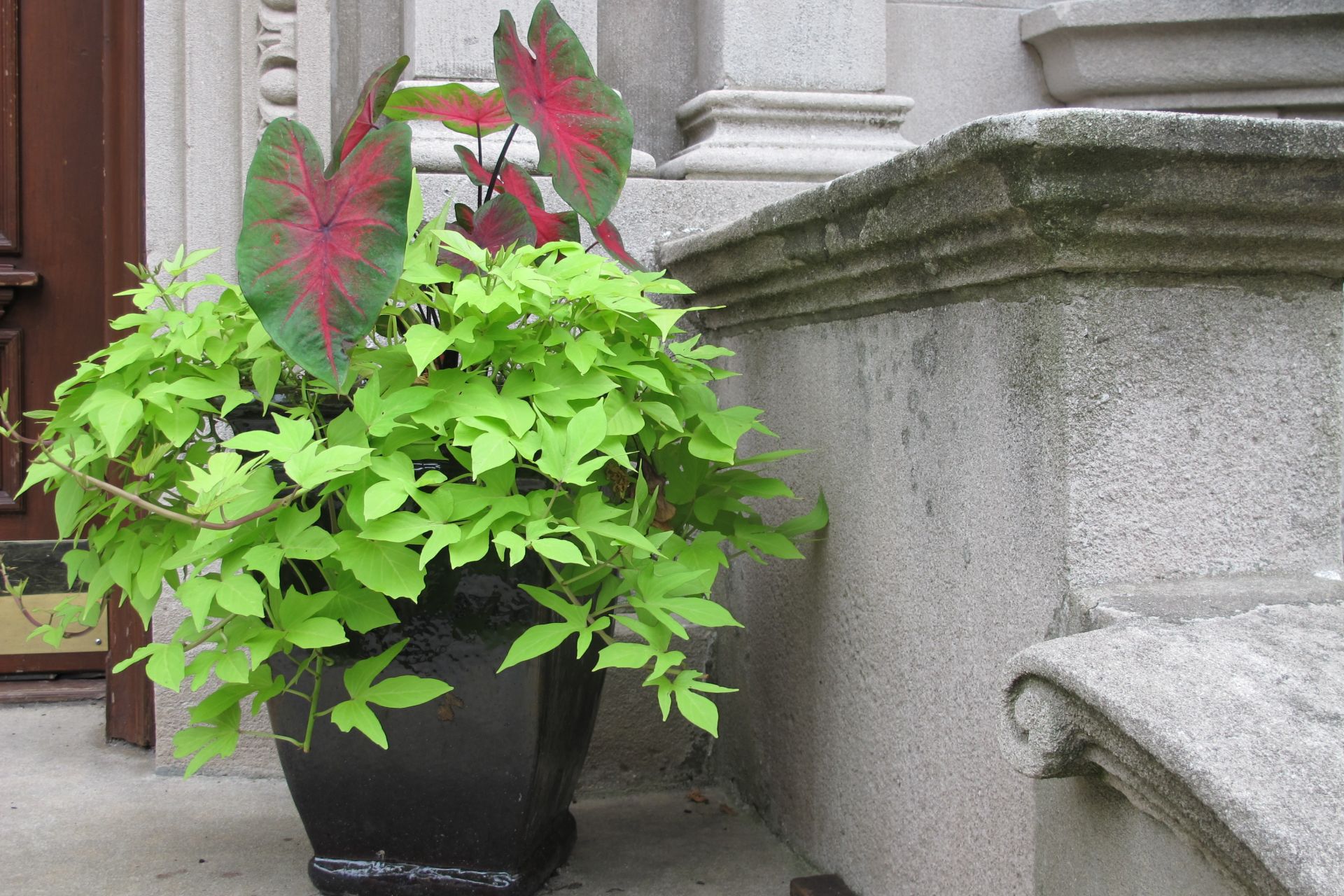 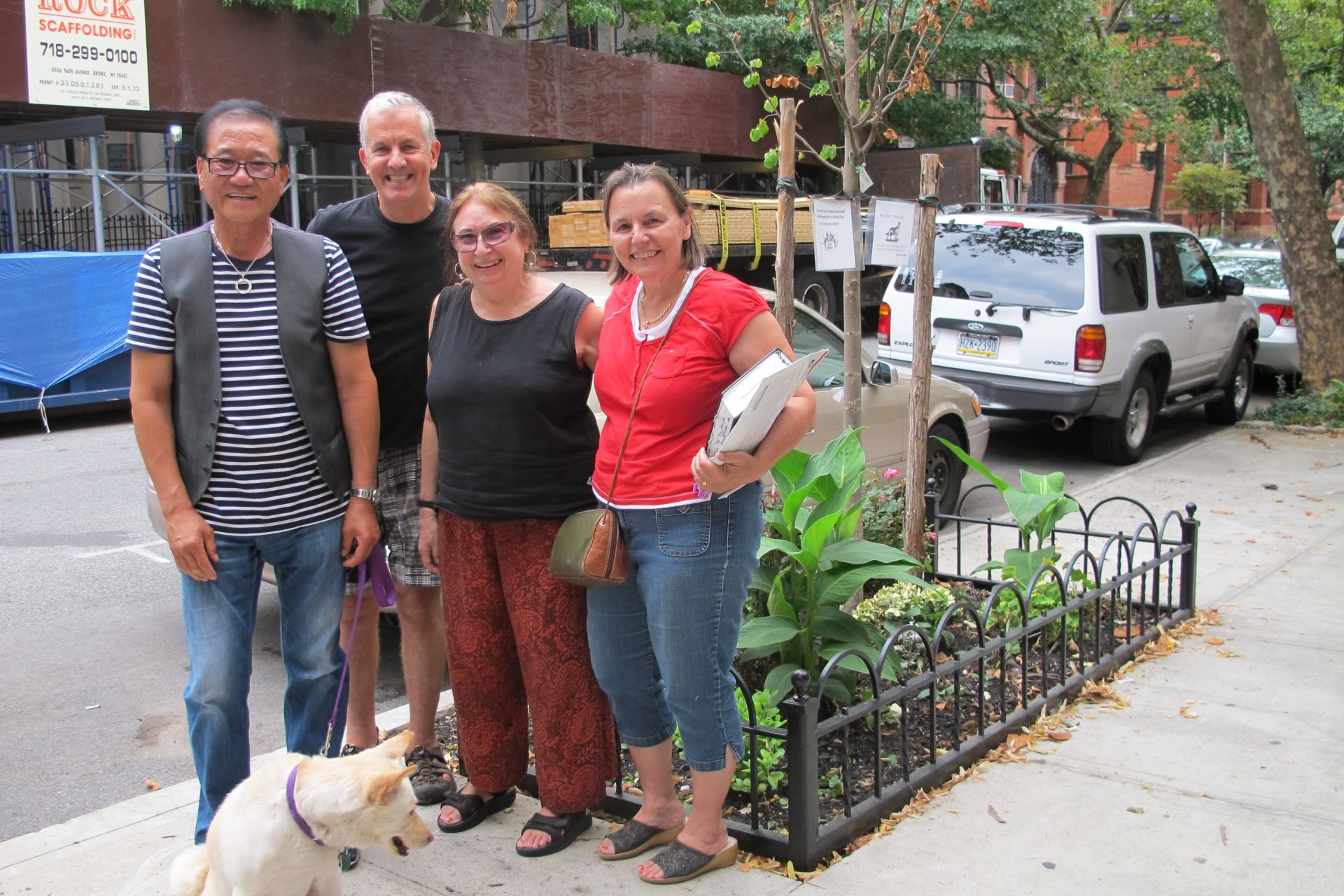 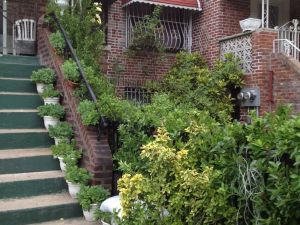 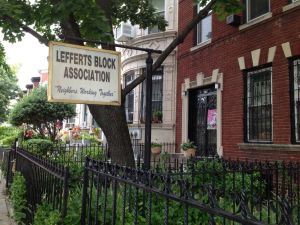 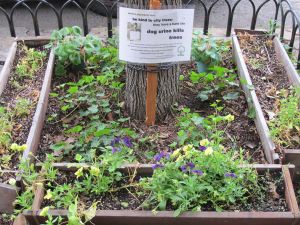 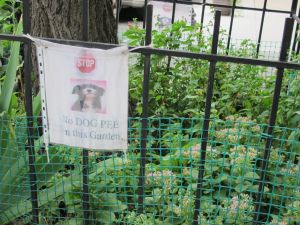 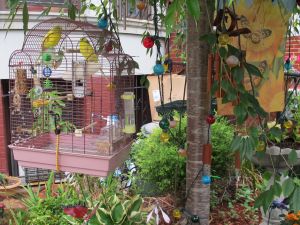 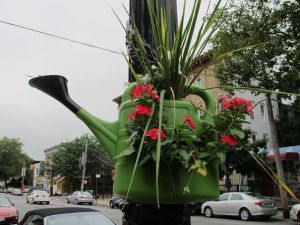 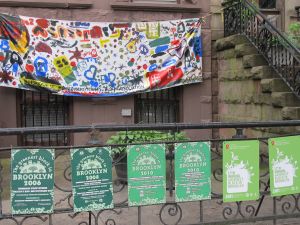 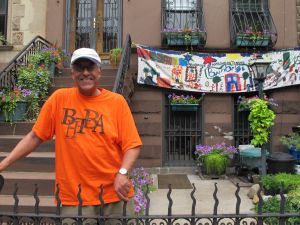 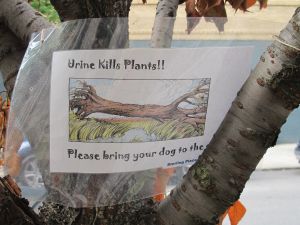 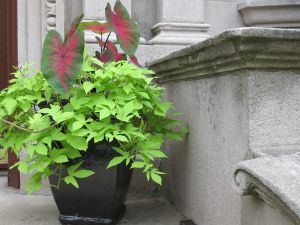 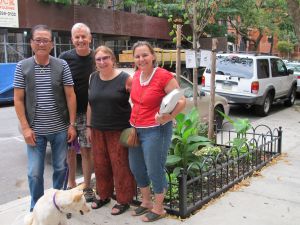 When a silver minivan emblazoned with the Brooklyn Botanic Garden logo arrived at Lefferts Avenue last Thursday, block association president Danna Hebbard immediately got on the phone and started dialing her neighbors. Community participation is one of the key factors that judges take into consideration when conferring the title of the “Greenest Block in Brooklyn” and Ms. Hebbard wanted them to see her block—a semifinalist in the Botanic Garden’s annual battle—at its best.

Besides a plaque, the title of greenest block comes with $300 and most importantly, boasting rights in a borough where greenness and sustainability can be a blood sport.

“The point is the greening up, not the winning,” said Robin Simmen, the director of the GreenBridge, the Botanic Garden’s community horticulture program, which has been organizing the competition since 1995. “But there are always people who are really interested in the winning.”

Designed to encourage community development through horticulture, the contest rewards teamwork. Streets must enter through block associations and are judged on their collaboration as much as their rose bushes and rhododendron. Judges love when residents rave about the joy of connecting with their neighbors through gardening, but they also look for proof—shared compost piles, clippings from one neighbor’s garden sprouting in another’s, communal planters lining the sidewalks. Ambition blooms alongside the asters and the hibiscus; the spirit is one of community-mindedness, but a competitive community-mindedness.

When the three judges arrived at Lefferts Avenue Thursday afternoon, they’d already been zipping around the borough for hours—studying residents’ mastery of mulching techniques and plant management, dispensing encouragement and advice and trying to determine who deserved to number among the eight finalists. Lefferts Avenue was their seventh stop of the day—one of the 41 semifinalists that had been plucked from a pool of 173 entrants. Fortunately, the judges showed no sign of fatigue, not even landscape designer and urban gardening guru Robin Horton, who clomped up and down the streets with a broken foot.

The judges seemed impressed with the efforts of Ms. Hebbard and her neighbors, who had, as bidden, emerged from their homes to form an impromptu welcoming committee. Participation levels were way up; the block had even banded together to tend the garden of a neighbor who had died recently. A profusion of laminated signs sprouting from the street tree pits asking people to curb their dogs caused some initial confusion—were they green or not green? The question was settled by Ms. Simmen, who was acting for the day as community ambassador. She explained that such signs definitely fell into the green category, as they showed both teamwork and an educational bent. (Dog pee, especially a lot of it, kills plants.)

“Great block,” whispered judge Kate Blumm (and also the garden’s communications manager)  as the judges hopped back in the van. “We’ve seen blocks that are more picture perfect, but that’s not what the competition is about in its entirety.”

Besides community participation, blocks are judged on horticulture practice, care of their street trees, soil and mulching, maintenance, plant variety, sustainability (native plants get extra points), color and visual effect. Judges (all volunteers during the semi-final round) are warned not to fall under the sway of beautiful architecture, but to consider how well blocks use what they have—a factor that many less-than-lovely blocks try to play up to their advantage.

One Park Slope block off Flatbush Avenue—was downright dishy about its disadvantages when judges visited. “We used to have a bench here for the homeless people to sleep on,” said resident Steven Gilroy, as he clutched a remnant of the recently-destroyed bench. “Although sometimes they did more than sleep,” he gestured at the wall of the adjoining building. “You can see the stain from defecation.”

Weighing such problems can be rather subjective.  “We use a numeric rating system, but it’s honestly more an art than a science,” Ms. Simmen noted. Still, when it comes to technique, there is very little to quibble over. The Observer watched as one judge, leaning in to examine the state of a tree pit a tree pit, commented dryly: “Oh, that’s not very good mulching.” A second judge dipped attentively toward the earth with an appraising squint before straightening up in shock, much like someone who has taken a big whiff of questionable milk to find that it has soured completely. “Oh no! That’s bad mulching,” she exclaimed in alarm.

On Bainbridge Street in Bed-Stuy, one of the last stops of the day, block association president emeritus and retired teacher Gary Shuford told judges that they’d missed seeing the block’s most avid gardeners—a troop of neighborhood children—in action.

“I wish you could have seen us two hours ago!” Mr. Shuford lamented, gazing down his street of brownstones, lush with black-eyed susans and cheerful hand-painted banners. The scene would have been eerily edenic if not for an active construction site on one end serving as a reminder that one was, in fact, standing in the middle of Brooklyn.

“One of the biggest highlights is being able to involve local youth,” Mr. Shuford gushed. “Honestly, it’s been win-win.”

Speaking of winning… The Observer wondered if Bainbridge, a two-time runner-up for the title, was hoping for more than just a moral victory this year. If they had, perhaps, stepped things up in order to best their competitors.

“I’m going to be honest with you. Each year the competition gets stiffer,” Mr. Shuford replied, adding that MacDonough Street, a few streets down and a two-time winner, was their main competitor. “They got started with the competition before us. They’ve encouraged us, we’ve encouraged others; they’re making the whole corridor something we can be proud of.”

Did Mr. Shuford ever walk down MacDonough Street we asked, just to see what tricks his competition might be up to?

He nodded solemnly. “All the time.”