TRENTON – At least three members of the Senate Legislative Oversight Committee, which will hold a hearing on the state’s privately run halfway housesThursday, have received campaign contributions over the years from Community Education Centers, a private firm that runs several of those facilities.

However, at least one of the lawmakers has returned the funds.

Sen. Barbara Buono, (D-18), Metuchen, sent out a statement shortly after the revelations of lax oversight at halfway houses were reported in an investigative piece by the New York Times.

The statement included the sentence, “And the fact that they (Gov. Chris Christie’s administration) have turned a significant portion of the corrections job over to a profit-making business shows that they have their priorities wrong,” she said, referring to CEC. “They should be protecting the public, not turning a profit for a politically-connected company.”

While CEC had contributed some $2,600 to her 2011 primary election campaign, spokesman Jim Griffin said she returned the money “quickly after the report came out.”

“She is looking forward to tomorrow’s hearing,” Griffin said. “Some good questions will be asked and we hope some straight answers will be given.”

In a telephone interview, Gordon said the goal of the hearing will be to find possible “legislative responses” to the problems that have been uncovered in the halfway housing system.

“I’m not interested in the politics of this, or in conducting a witch hunt,” he said.

Having said that, Gordon said he sees no reason to give back the contributions he has received, saying “We’re holding a hearing that CEC would probably prefer to not be held.”

Gordon added that he has returned funds from contributors in the past, but regarding CEC: “not at this point.”

Kyrillos could not be reached immediately Wednesday for comment.

CEC has contributed thousands of dollars over the years to both Republicans and Democrats. Among the biggest recipients has been Sen. Dick Codey, who served as CEC’s insurance broker, Assemblyman Joe Cryan, and Essex County Democrats.

The hearing today will focus on the conditions and management of halfway houses in New Jersey following the blistering report in The New York Times on an escalating number of inmates who have escaped from them over the years.

Since 2005, there have been 5,100 residents who’ve escaped from the halfway houses, many of them in Essex County. In that county alone, 1,000 inmates escaped from facilities there in 2009.

Comptroller Matthew Boxer, who will be one of several individuals testifying Thursday, said in a report last year the state has done “a poor job of monitoring the program.”

Christie’s spokesman, Michael Drewniak, said Wednesday he hopes the committee will be fair and “maintain perspective” regarding the long-running halfway house program.

“We always welcome constructive participation from the Legislature, but if they turn their hearings into partisan events, that’ll be plainly obvious,” Drewniak said in a statement. “Sen. Gordon, for one, said he does not view this as a partisan issue. That’s great; we’ll take him at his word and see how it goes.

“The halfway house program has been a centerpiece of New Jersey corrections policy for decades and grew dramatically under many governors before Gov. Christie,” Drewniak continued.

“Unlike prior administrations, we have enforced contract requirements previously ignored, including fining vendors. We’ve also increased inspections more than threefold and have a corrections commissioner dedicated to improving the program since the day he arrived.” 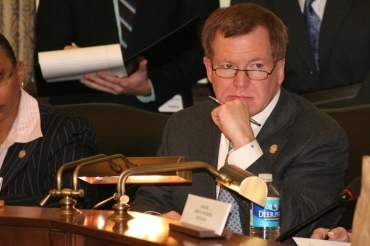