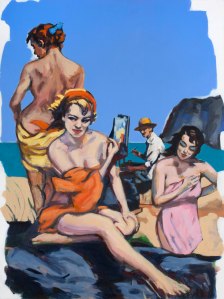 ‘The Harem’ (2012) by Robinson. (Courtesy the artist and Haunch of Venison)

Last Thursday evening, as the New York art world prepared for its annual August hibernation, people spilled in and out of the Haunch of Venison gallery on West 21st Street, a few feet from the West Side Highway, for one of the season’s last group shows. The opening reception for “Claxons,” an exhibition organized by Walter Robinson, the editor of Artnet magazine until last month, was underway.

Back in June, the online art-sales and data site Artnet suddenly and unceremoniously closed the magazine, which Mr. Robinson edited for its entire 16-year run, and so the reception was also something of a celebration of that publication, with writers like Glenn O’Brien, Christian Viveros-Fauné, Howard Halle and Donald Kuspit, and artists like Robin Winters, John Ahearn and Deborah Kass all stopping by to say hello. Roseanne Barr was apparently also there, some onlookers reported.

Over the years, Mr. Robinson wrote about hundreds of shows for his “Weekend Update” column on Artnet. “I thought it would be interesting to turn the tables on him and have him curate a show,” Haunch of Venison director Emilio Steinberger told us by phone after the opening. (Their discussions began well before the magazine was shuttered.)

“Claxons” features work by four artists, all of whom have written for Artnet. There are ceramics by Elisabeth Kley, sculptures (including 44 glass potatoes) by John Drury, splashy abstract paintings by Robert Goldman (a k a downtown impresario Bobby G) and even some paintings by Mr. Robinson himself. He used to show a fair amount in the 1980s but has focused on writing for the past two decades.

“I pushed him to put his own work in the show,” Mr. Steinberger told us. He’d seen a survey of Mr. Robinson’s paintings from the 1980s—lusty, romantic scenes painted from movie posters and pulp covers—at Metro Pictures in Chelsea in 2008. “That was not part of his thought,” the dealer continued. “I could see him shying away from doing that, so I insisted that he should put them in.” And thank goodness. There are large new romance paintings, as well as a big, juicy-looking cheeseburger, which has a wall all to itself.

In lieu of an opening-night dinner, Mr. Robinson suggested a party for Artnet magazine staff and its contributors, which Haunch will host on Thursday. (It’s a private event.) “It’s going to be a wake, an Irish wake,” Mr. Robinson said a few days after the opening. “Actually,” he corrected himself, “I don’t think I had many Irish people write for me. We’ll be sitting Shiva for the magazine.”

Since the closure of the site, Mr. Robinson has spent more time painting in his Long Island City studio, and it sounded like he’s enjoyed dealing with galleries exclusively as an artist. “Everyone treats you with such tender care, unlike art critics and journalists, who get grudging respect at best,” he said.

“I don’t know how I ever lasted working so much,” he said, apparently referring to his years as an editor. “I totally like not working.” What’s next? “My friend Duncan Hannah told me that to make it as an independent artist you have to have a lot of irons in the fire,” he said. “So I’m trying to get some irons in the fire.”