“I’m not a bundler, I’m a headliner,” said Christie, when someone asked him if he’s handling any of the GOP presidential contender’s money.

“I haven’t solicited checks personally,” said the governor, who acknowledged being a former bundler for his party.

The governor’s due in Aspen on Thursday to headline a fundraiser for Romney’s presidential campaign.

Should Romney release his list of bundlers, the reporter pressed.

“It’s the latest crime du jour,” said Christie, who said he knows the Obama administration wants to talk about the issue.

Someone else asked Christie – rumored as a potential Republican choice to give the keynote address at the Republican Convention next month in Tampa – if he thought Romney stuck his foot in his mouth on his international trip. A former Olympic organizer, Romney noted that the Brits had certain problems they needed to iron out in advance of the games, a remark that prompted angry backlash from the mayor of London and others.

“When you’re running for president, they make a big deal out of everything that comes out of your mouth, it’s not for me to comment on,” said Christie.

The governor added, “I think this trip has been a useful one.” He cited Romney’s presence in Poland and Israel in particular. 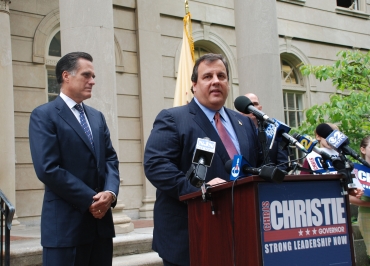