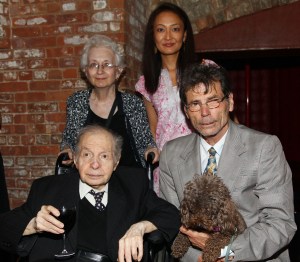 Herbert Vogel, a U.S. postal clerk who acquired some 5,000 works of contemporary art over the course of about half a century, with his wife Dorothy, building one of America’s most storied and unusual collections of post-1960 art, died yesterday in New York, according to the National Gallery of Art, in Washington, D.C., which holds more than 900 works from their collection. He was 89.

>> Take a look at works from the NGA’s Vogel Collection

Mr. Vogel and his wife, Dorothy Vogel (née Hoffman), who survives him, began purchasing art in 1962, after a visit on their honeymoon to the National Gallery. They used his salary—and later his pension—as a nighttime postal clerk to purchase works by many Minimal and conceptual artists at the very beginning of their careers, often well before those artists were recognized. They lived on her salary as a reference librarian.

The Washington Post writes that the couple had three rules for acquiring art: “It had to be inexpensive; it had to be small enough to be carried on the subway or in a taxi; and it had to fit inside their one-bedroom apartment.” Among their purchases were early works by Sol LeWitt, Robert Mangold, Christo and Lynda Benglis. They often paid in installments, and got steep discounts from artists who were pleased to have their work included in the Vogel collection.

The Vogels never sold a work on the secondary market, preferring instead to see their pieces end up in museums. In the early 1990s, the National Gallery agreed to acquire a number of works in the form of gifts and purchases, The Post reports. As works moved to the museum, their modestly sized apartment gained new space for art, and they once again began acquiring art.

“We will miss Herb’s astute eye and wry sense of humor and we give our heartfelt condolences to Dorothy,” Earl A. Powell III, the director of the National Gallery, said in a statement. “We are forever grateful for their generosity in pledging so much of their collection to the nation.”

The 2008 documentary Herb & Dorothy, directed by Megumi Sasaki, profiled their collecting work, and noted that they were not without detractors since they frequently bought directly from artist’s studios, cutting art dealers out of the process.

In 2008, the Vogels launched a program called Fifty Works for Fifty States, in which lots of 50 works from their collection were donated to museums in all 50 states.

‘‘We could have sold things and lived in Nice and still had some left over,” Mr. Vogel once told the Associated Press, The Post notes. “But we weren’t concerned about that aspect.’’