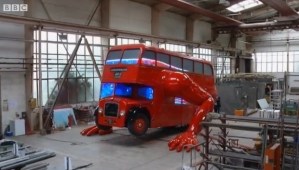 Continuing our Olympic art coverage, here’s a BBC video of a statue by the Czech artist David Cerny who has a double-decker bus that does push-ups, to celebrate the games.

“There’s one common exercising for every sportsman around the world,” he says in the unembeddable video, “and it’s push-ups.” He also points out that they’re often used as punishment, say, in the army.