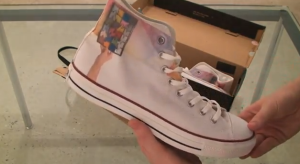 In a video entitled “Unboxing Brendan Fowler,” on the YouTube channel for Higher Pictures gallery, a person cuts into a cardboard box and pulls out an ordinary white mug that has written on it, “Artie Vierkant.” There are 60 similar videos that show a host of seemingly ordinary objects being unpacked: a pair of sneakers, three shower curtains, a wall clock. Why all the hullabaloo over the unpacking of a bunch of regular household items? Because each of these items, like the mug by Brendan Fowler, is a work by an artist produced for a group show entitled “Brand Innovations for Ubiquitous Authorship,” organized by Artie Vierkant and Higher Pictures. Though unlike most group shows, none of the artists had laid eyes on the physical works before they were delivered to the gallery.

The works were produced by artists using a custom-printing or fabrication service like Zazzle or CafePress, and sent directly to the gallery, sight unseen. Sixty total artists were asked to design and produce an object in this manner.

Watching the works be unboxed is something of a thrill. Travess Smalley, a New York-based artist who creates digital images through a process that involves painting, drawing, collage and other non-digital steps, created a shower curtain in a psychedelic pattern not unlike one of his paintings.

But back to Mr. Vierkant for a moment. The artist who organized the show had this to say about it, via Rhizome:

I always thought of these services as a very interesting sign of where we’re headed in consumer space. The Internet has helped make one-to-many content empires stumble and niches to become stronger, and consumer goods are now no exception. The idea is that we’ve moved past mass production and into something like custom/craft/artisinal production on a massive scale; production for each individual amongst the mass.

Check out “Unboxing Travess Smalley” here, and for further small thrills go to the YouTube channel and check out the rest.