The city just unveiled plans to rezone Midtown East, with development concentrated around Grand Central and Park Avenue. Buildings almost as big as the Empire State Building could be built in the red area.
mchabanobserver 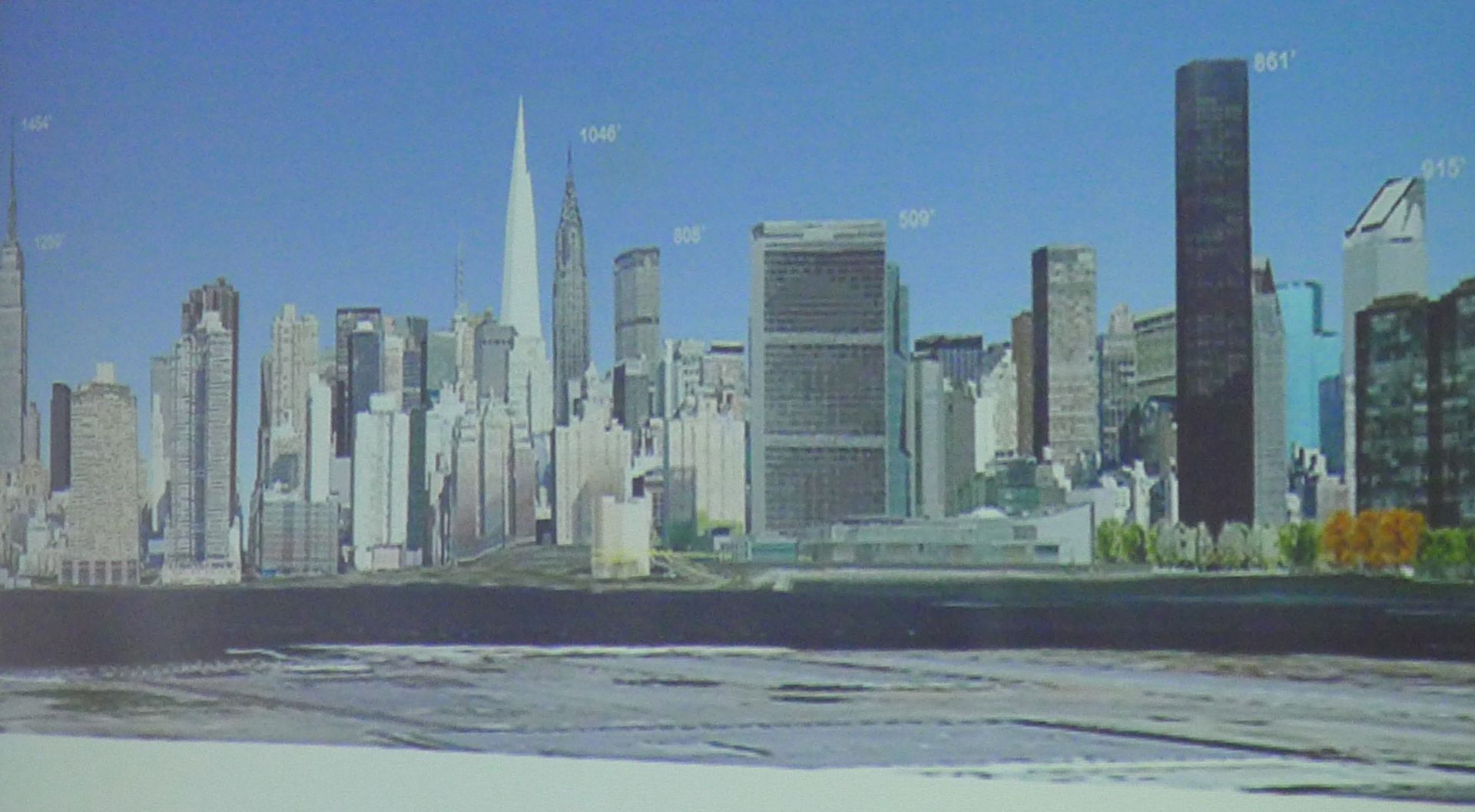 An illustrative illustration created by the city of a new tower near the terminal.
mchabanobserver 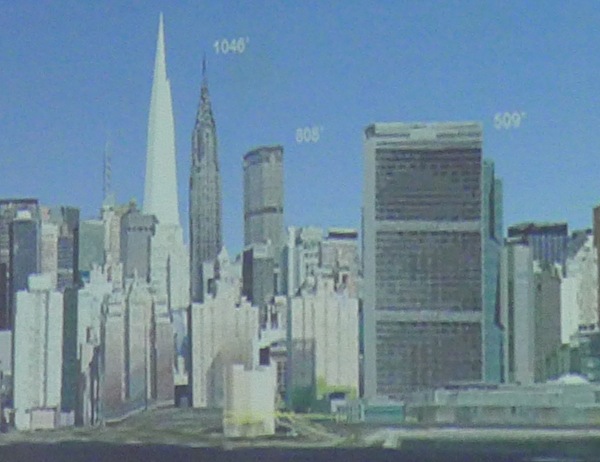 Looks an awful lot like the MoMA Tower, which the Department of City Planning famously reduced in size.
mchabanobserver 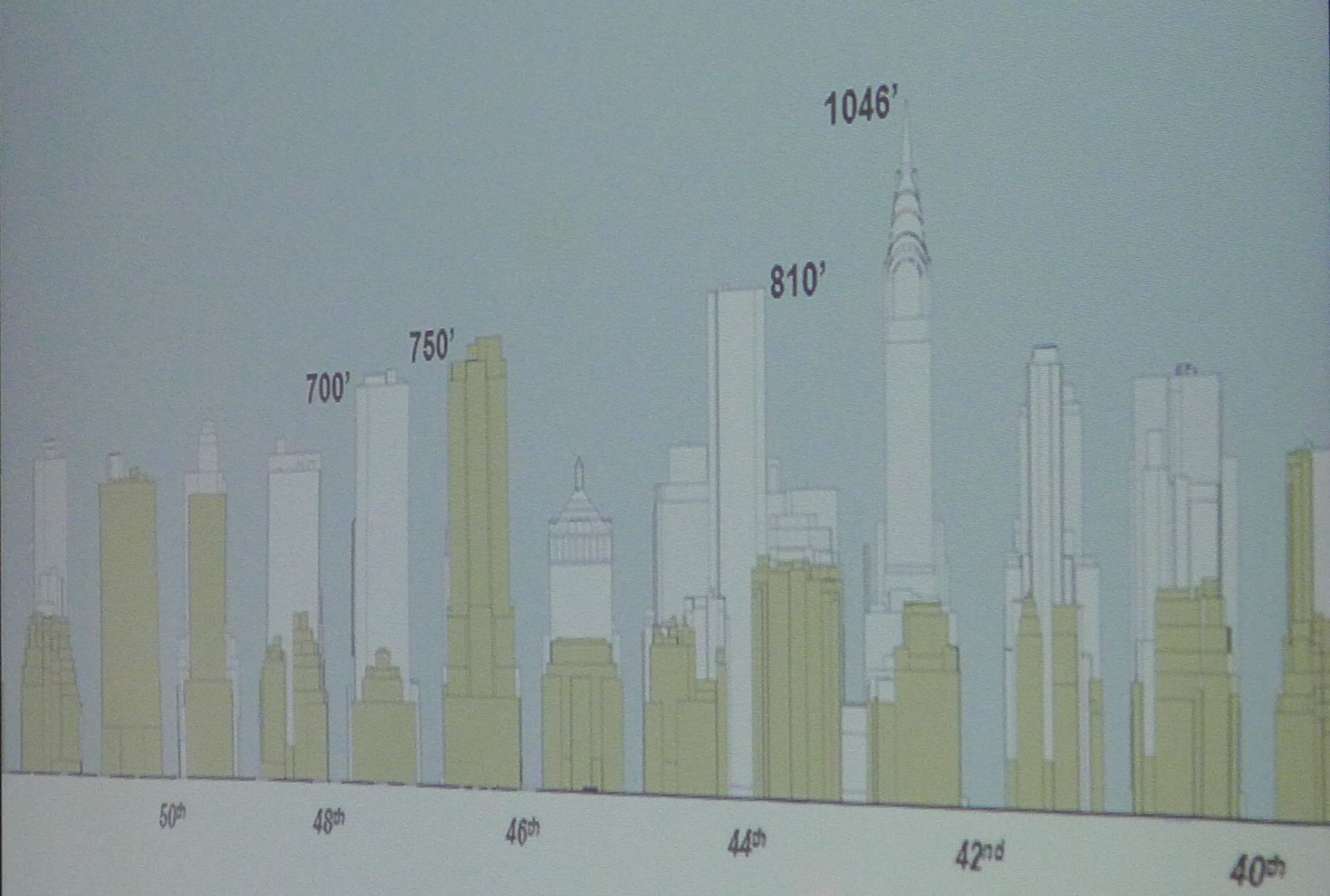 Without including a striking design and going the public review process, the towers would be shorter around Grand Central.
mchabanobserver
Advertisement 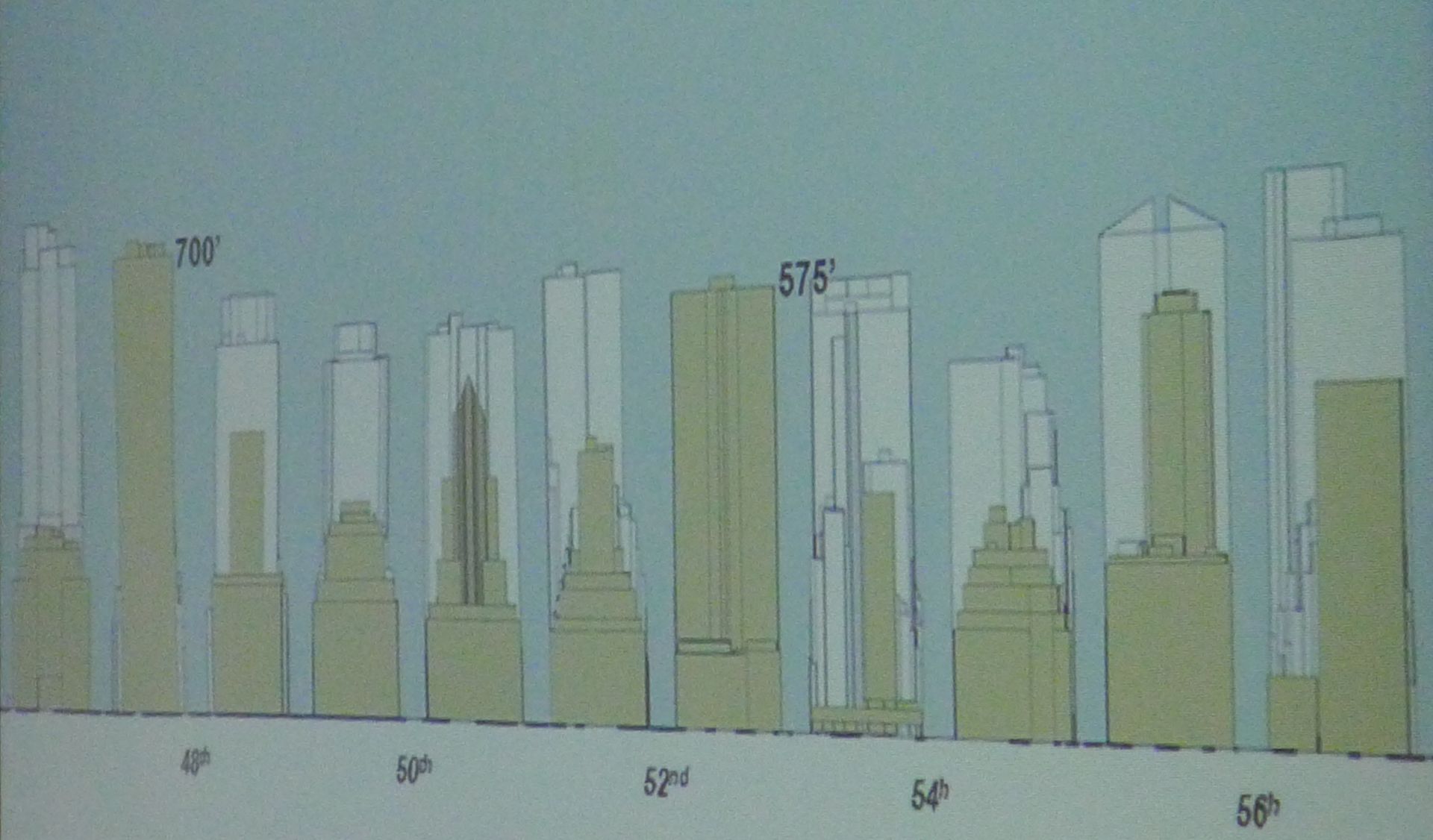 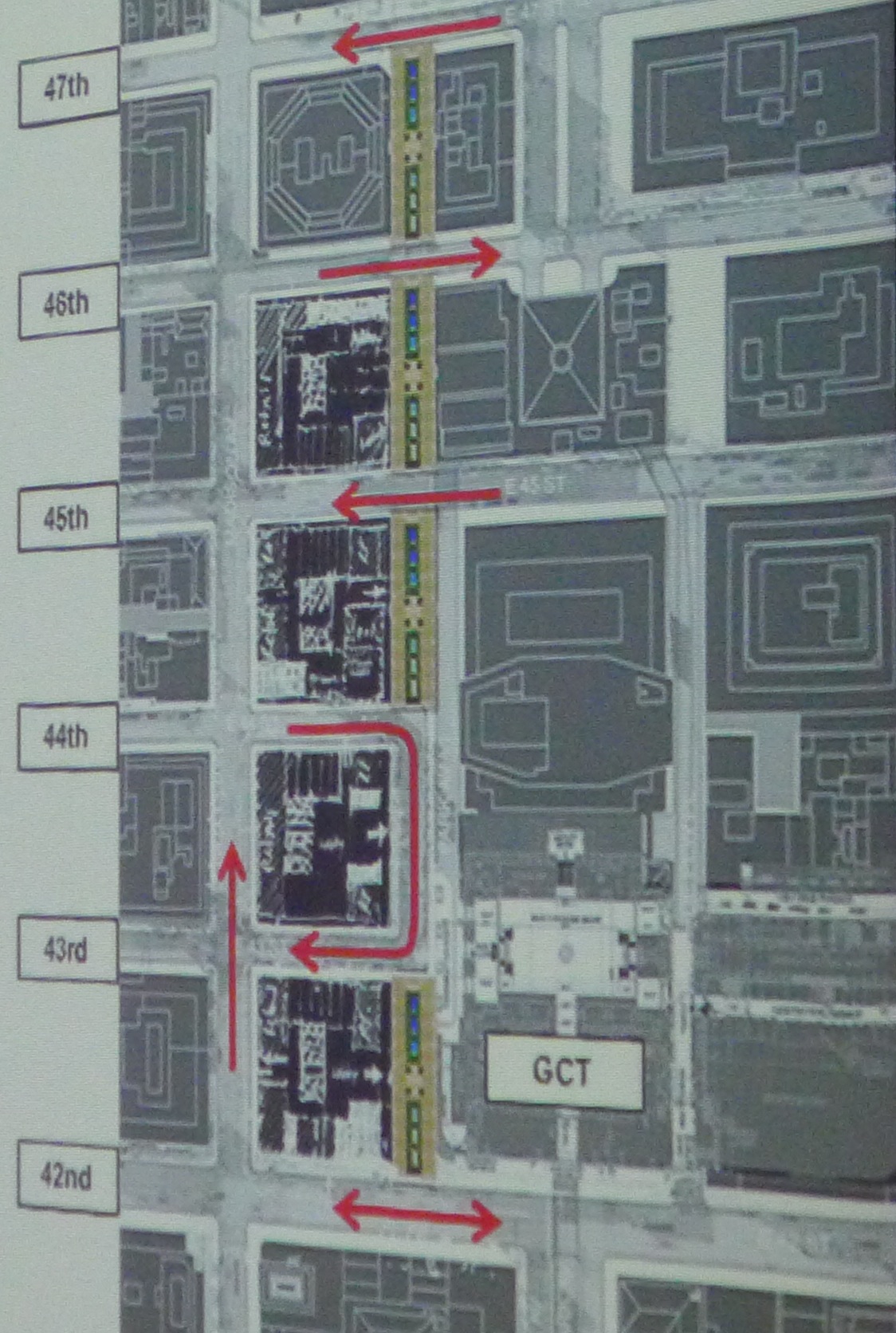 All of this new development would go to funding public space improvements, like better subway stations and the rather controversial pedestrianization of Vanderbilt Avenue, pictured here.
mchabanobserver 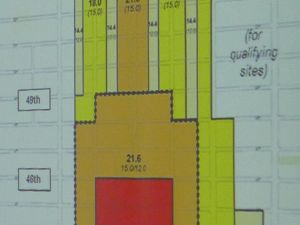 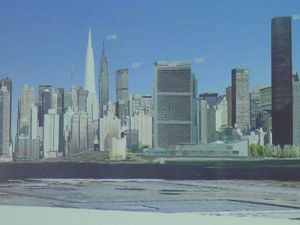 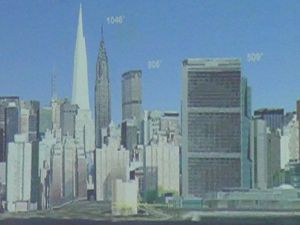 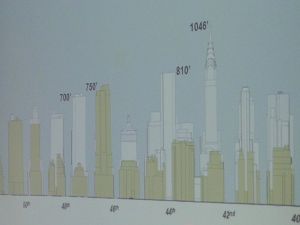 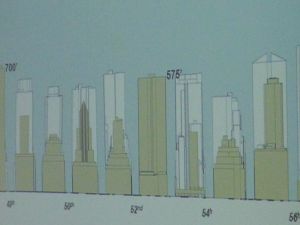 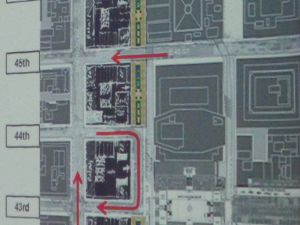 It’s the moment developers, planning geeks, and perhaps the entire city without knowing it, has been waiting for all year: the unveiling of the city’s plans, first hinted at in the mayor’s State of the City address, to remake the face of Midtown Manhattan.

It is big. No, really big. Bigger than almost anything the city has ever seen. Empire State Building big. While that will not be the case for every tower that is eventually built through the program, it could be for at least a few.

The parameters, unveiled at Community Board 5 last night, are close to what had been previously hinted at, an area stretching from 39th Street up to 57th Street, emanating out from Grand Central. Fifth Avenue has been eliminated from the original study area, as has the northern reaches of Third and Lexington avenues, which were considered too residential. Still, the plan affects all or part of 74 blocks in the heart of the city.

Far fewer of them will be developed because a provision in the plan limits development sites to only those that stretch the length of an entire avenue blockfront, and they must sit on a site that covers at least 25,000 square feet, or a little more than half an acre. Still, that is already the case for many Midtown towers, including landmarks like the Seagram and Lipstick buildings, for example. The bigger challenge would be emptying old towers of tenants so new buildings can be built.

Just how big? As suggested at another public meeting last month, the focus of the rezoning is on the blocks surrounding Grand Central Terminal as well as the length of Park Avenue to 57th Street. Surrounding avenues will see their density bumped up slightly, from a floor area ratio of 15 to 18 (excuse the technical numbers for a moment). Park Avenue and the Grand Central subdistrict, which will expand one block north to 49th Street and two blocks south to 39th Street, between Madison and Lexington Avenues, will have an FAR of 21.6. A new Grand Central core district will be created for the blocks immediately around Grand Central with an FAR of 24. (See: map.)

To put that all in perspective, the massive Pan Am/MetLife tower that currently looms over Grand Central has an FAR of 18. City Planning pointed to the old Bear Stearns headquarters around the corner, at 383 Madison Avenue, as having an FAR of 21.6. One Bryant Park, just down 42nd Street, hits 24 FAR, and is one of the biggest buildings in the city. Frank Ruchala, the project manager for the rezoning from the Department of City Planning, mapped out scenarios with towers rising between 575 feet and 700 feet  on Park Avenue and between 700 and 800 feet around Grand Central, approaching the height of 30 Rockefeller Center.

“We think that’s what’s appropriate to build the kinds of building we need,” Mr. Ruchala said. After all, this plan is predicated on preparing the Central Business District for a major modernization over the coming decades.

But the fun does not end there. All these big new buildings can be built as of right, meaning no cumbersome public reviews. But should a developer wish to aim high, really high, they can go for an additional FAR bonus, a jump to 24 along Park and around Grand Central, while the Grand Central core subdistrict, the eleven small blocks around the train station, jumps up to a whopping 30 FAR, on par with the skyline defining Empire State Building (FAR of 33, the only thing in town that comes close). As if to drive this point home, City Planning’s presentation showed a spindly tower, which looked not unlike the MoMA tower it once rejected, piercing the skyline above Grand Central.

To achieve this, a developer must submit to a special permit, requiring the standard (and often torturous) public reviews. There would be a considerable emphasis on quality design, both at the top of the building, which would almost certainly take a prominent place on the skyline, as well as at the base, where “a significant public space” would be required, as Edith Hsu-Chen, director of the Department of City Planning’s Manhattan office, put it.

Mr. Ruchala framed it in terms of global competitiveness. “If you look around the world, you see iconic building being built in every major city,” he said. “We invented that.” He then showed a slide of the Chrysler Building, Seagram Building and Lever House.

These greater heights do not come for free, however. For a boost ranging from 25 to 100 percent of the current zoning, developers would have to buy their air rights either from local landmarks or a city-sponsored Development Investment Bonus. The numbers are still far from final on this, but the project would hope to generate many millions of dollars to fund improvements to the streets and subways.

The city has only identified two projects so far, the most critical of which seems to be better routes through the Grand Central subway stations for the Lexington Ave and No. 7 trains, though attention is also being paid to stops along 53rd Street. “The 4/5/6 is at 116 percent capacity,” Raju Mann, chair of the board’s transportation committee, pointed out warily. “We need to think seriously about solving this problem, and make sure there are sufficient resources to do so.”

The other big public works project—of which there could be more, the city is still soliciting ideas—is the already controversial closure of Vanderbilt Avenue. A drawing of the plan reveals that the crosstown traffic lanes will remain open, essentially creating plazas out in front of the new and old buildings, similar to Times Square but without the traffic of 7th Avenue rushing by. Access to Grand Central would still be provided by the block between 43rd and 44th streets (just missing the slightly incensed Yale Club, two of whose members spoke at the hearing).

As for those old buildings not quite big enough to cash in on all the new air rights being thrown around, if they were built before the 1961 zoning code, and thus have more FAR than current zoning might allow, developers will be allowed to tear down their buildings and build to the old densities, a move seen as helping replace many outdated buildings—nearly 80 percent in the area are older than 50 years, according to the city.

While supportive of the idea, the community board was taken aback by many of the proposals. “The amount of density here is incredible, and I applaud the city for being ambitious” Mr. Mann said. “But I don’t think many of the issues have been thought through that will keep Midtown from being overwhelmed.”

One of the biggest issues was the decision to allow bigger buildings if their designs were deemed to be of sufficient quality. There was widespread concern about who would determine that—the City Planning Commission and the City Council—and why every building in the district should not be held to the same standard if Midtown was so important to begin with, as the city officials kept insisting. “Thirty FAR scares the hell out of me,” board member Miele Rockefeller said. Member Matthew Scheid countered that “I’m fine with 30 FAR, but I don’t understand why it’s not 40 FAR or 25 FAR. You haven’t explained the rationale for the numbers.”

As with a previous meeting, historic preservation was a hot topic, with many board members concerned that there would not be enough time for the Landmarks Preservation Commission to survey and protect buildings of historical or cultural significance. Especially now, given the economic incentive developers would have to tear down their buildings, since the rezoning has been outlined, the task would be even harder. “I think there’s wide recognition that this is a special area, and there are special buildings in this area,” Edward Klimerman said.

There were also widespread concerns about whether the sale of development rights would be sufficient to cover the costs of the needed improvements. “The city paid for the improvements to Times Square,” land-use vice-chair Giuseppe Scalia pointed out. “Why are developers being given millions of square feet to do it here?”

But the biggest issue was not so much policy as politics. The city is putting what it calls a sunrise provision into the plan, which means that no buildings can be built under the new zoning until five years from now, in the summer of 2017. This is meant as a protection for the city’s considerable investment in Hudson Yards—Mr. Ruchala called that “our top priority”—but that left many on the board wondering why this rezoning could not simply wait five years. Their explanation, at times implicit, occasionally explicit, was that the administration, and its partners in Big Real Estate did not feel it could wait. Ms. Hsu-Chen said simply that developers needed time to plan for their projects.

“There was this idea that came out in the media that we were looking to destroy half of Midtown,” Mr. Ruchala said. “We’re not looking to do that, and we don’t think that’s possible. We’re looking to create some development for the future.”