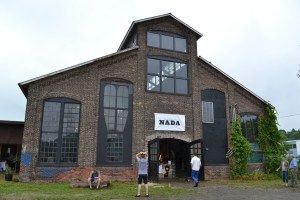 Hudson, N.Y., is a city of about 6,700 people on the banks of the Hudson River, two hours north of Manhattan by car or train. It has historic mansions, run-down boarded-up houses and antiques shops. It’s also home to a correctional facility and will soon be the site of Marina Abramović’s Rem Koolhaas–designed performance art academy.

Artists have been settling in the area in recent years, and one of the newest arrivals is Gerard Malanga, the poet and former Andy Warhol collaborator, who moved from Brooklyn. “I used to live at Metropolitan and Graham,” he told us last Friday evening in Hudson. “I was a morning habitué at [Fortunato] Brothers Café in Williamsburg. They treat me like family.”

The Observer was standing inside an old glue factory that has been reclaimed as an event space and christened Basilica Hudson. An hour or so after speaking with us, Mr. Malanga, who is 69 but still has the air of the sultry young man who appears in photos with the Warhol crowd, took the stage in a makeshift theater in the building and read new poems to some 50 people sitting in mismatched vintage chairs as Sonic Youth’s Lee Ranaldo made melancholic drones on his guitar.

“Arshile Gorky,” Mr. Malanga intoned. “It was said Gorky got away with a lot because he was funny, or he could still be heard in the shadows raving and ranting. He was always making de Kooning feel bad about things, as if the joke weren’t enough.”

In the dark, 6,000-square-foot hall next door there were dozens of sculptures. Forty-eight members and associates of the New Art Dealers Alliance had spent the day installing them. The next morning, NADA Hudson, the organization’s hybrid summer getaway-fair-exhibition, now in its second year, would open.

Despite gray skies and occasional bursts of rain, NADA Hudson was humming by early Saturday afternoon. An Amtrak train came through every hour, bringing fresh waves of people from downstate. “When the doors opened this morning, there were people waiting to get in,” said Lauren Marinaro, the assistant director at Chelsea gallery Zach Feuer, which occupied a corner of the factory. “And it was pouring at that point.”

That hearty opening crowd notwithstanding, NADA Hudson, billed as “a site-specific project,” has little in common with most other fairs. There are no booths, no VIP section, no tickets. The food is cheap and delicious (juicy pulled pork on buttery buns), and most of the art inside was modestly scaled, the kind of things you could fit in the back of a small truck, like Feuer’s Marianne Vitale sculpture, which looked like three tombstones made from beaten-up old wood and yellow metal. (Outside, Feuer had the event’s most ambitious works, a series of super-size workbench-like sculptures by Ms. Vitale.)

A few yards from Feuer’s booth, Photios Giovanis, who runs Callicoon Fine Arts on the Lower East Side, was lying with NADA director Heather Hubbs between enormous sheets of photo paper crumpled to form a bed. “It’s so comfortable, it’s insane,” Ms. Marinaro told us. The bed was a conceptual work conceived by Thomas Kovachevich; Mr. Giovanis built it using his instructions. “Buy the largest piece of seamless photo background paper in super white,” the dealer said, recalling the recipe, “and make a bed.” Fabrication cost: $40. “It’s like the dealer’s in bed with the artist, or all wrapped up in the work,” Mr. Giovanis explained. “It’s also about entropy.”

From inside the paper bed, Ms. Hubbs talked about the changes to this year’s NADA Hudson. “Last year was really fun, but it was a little bit crowded, and visually too much,” she said. “We learned a lot last year.” This year, NADA limited dealers to a single work (placed inside; outdoors you can have extras) and no more than 200 square feet of floor space. Since exhibition cost only $400 per 100 square feet inside and half that price outside, there was no huge pressure to bring work to cover expenses. The alterations worked: unlike last year’s frenetic, crowded bazaar, it looked more like an eclectic, spacious and reasonably solid exhibition.

Dealer Pascal Spengemann strolled over holding a tall can of Miller High Life. He would not be trying out the paper bed, he said. “There are bed bugs,” he deadpanned. He was wearing a t-shirt by artist Andrew Kuo that had on it an illustration of Bart Simpson in a basketball jersey. In a cartoon bubble, Bart says, “Don’t have a cow, man!” “Since Jeremy Lin got traded to Houston, Andrew’s heartbroken,” Mr. Spengemann explained. Bart is holding a gigantic cup of purple liquid, the cough syrup beverage favored by some Houston rappers. “He’s all wasted on the purple drink,” the dealer explained.

Mr. Spengemann has also recently switched teams. His now-defunct gallery, Taxter & Spengemann, closed last year, but he recently became a director at Marlborough Chelsea, which was showing a tall, neon-colored obelisk made of resin and Plexiglas by Amy Brener. “There are still people who don’t know what I’m doing,” he said, “so it’s a good opportunity to say hello to people.”