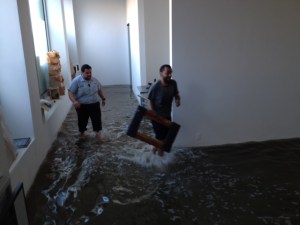 Late last Tuesday a technical failing at I-20 gallery, most likely a burst pipe or broken air conditioning unit, caused the gallery to fill with causing “significant” interior damage, according to an e-mail sent by Paul Judelson, gallery president, to artists with works in the gallery. I-20 was between shows at the time and, Mr. Judelson said, not much art was damaged, though he said he could not yet comment on the full extent of the damage caused to works in the gallery.

“We are assessing damages with our insurance and will keep everybody notified,” he wrote in the e-mail, sent the day after the flooding. “Events like this are difficult and periodically happen. I have heard of other ground-floor galleries that have been flooded due to pipe bursts, notably Metro Pictures on one occasion.” 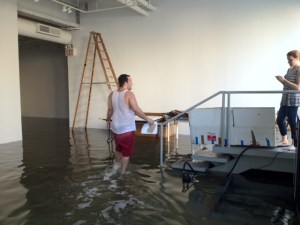 In a phone interview today Mr. Judelson reiterated how common a problem this is, saying “everyone I’ve spoken to recently” has heard of similar building failures in Chelsea, though he added that he still isn’t sure what exactly went wrong.

Most of the gallery’s art was being stored offsite, he said, and any pieces that were in the gallery at the time of the incident have been moved to a storage facility for assessment. He declined to say how many works encountered as a result of the flooding.

(All photos courtesy of e-mails to artists.) 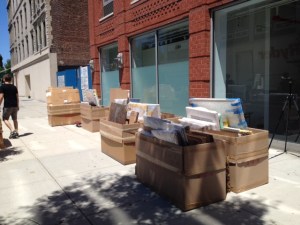 Works from the flooded gallery on the sidewalk in Chelsea.