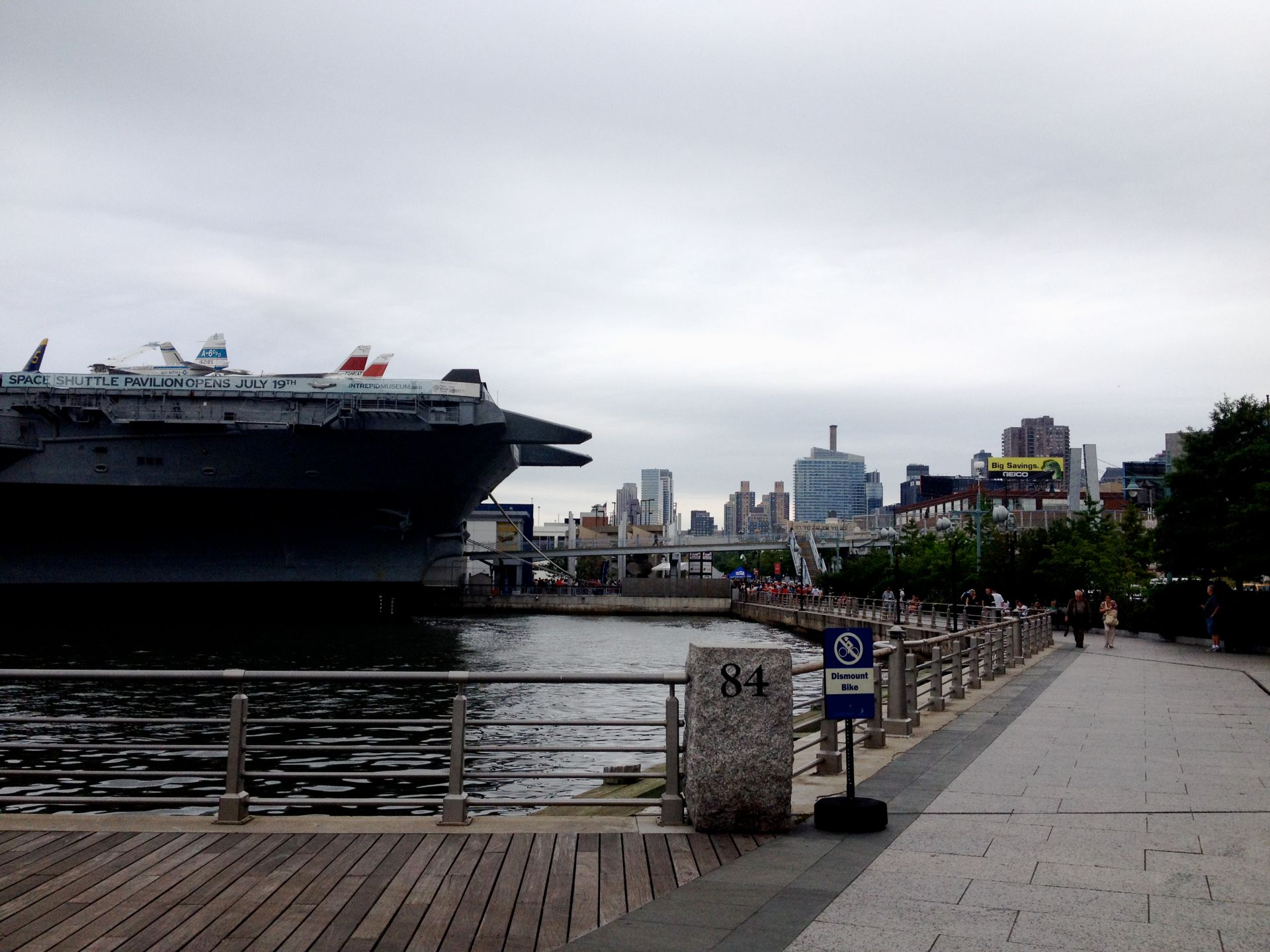 A banner reading, "Space Pavilion Opens July 19" is visible from the side of the boat. 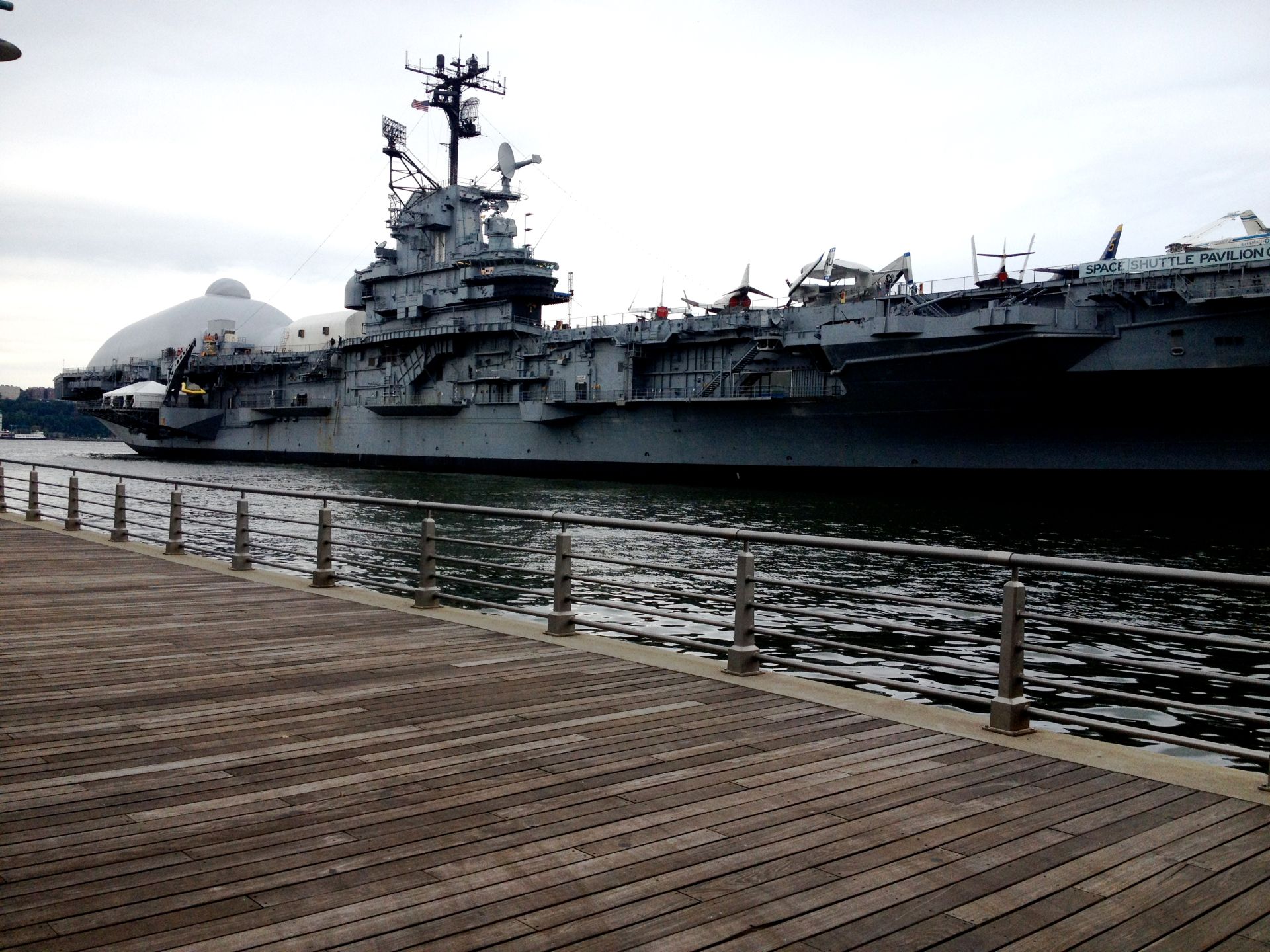 The Intrepid, a World War II aircraft carrier, sits in the Hudson River and is accessible to visitors from the dock on 46th street. 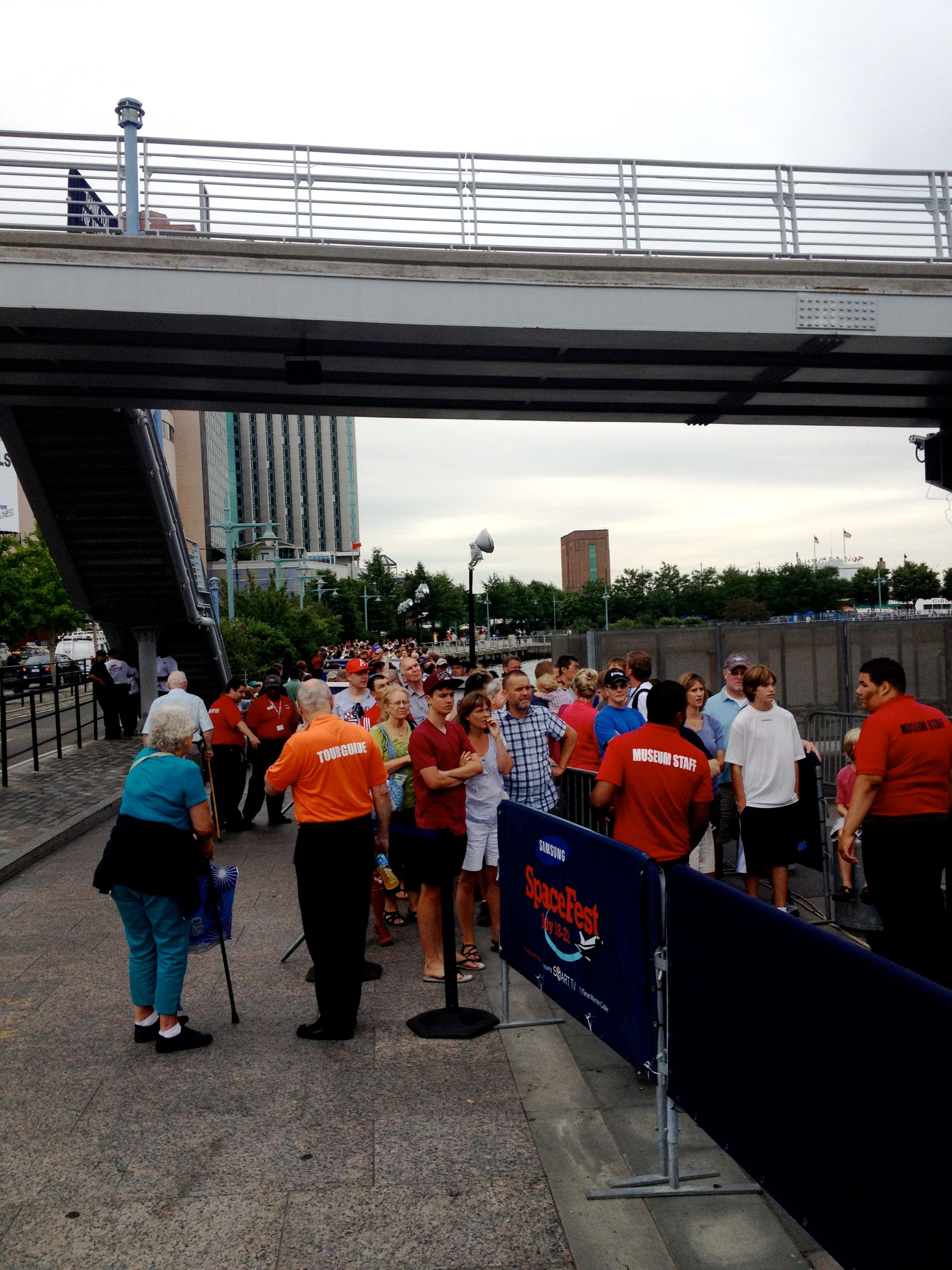 The crowd was bigger than usual at the Intrepid, filled of New Yorkers eager to see the new exhibit. 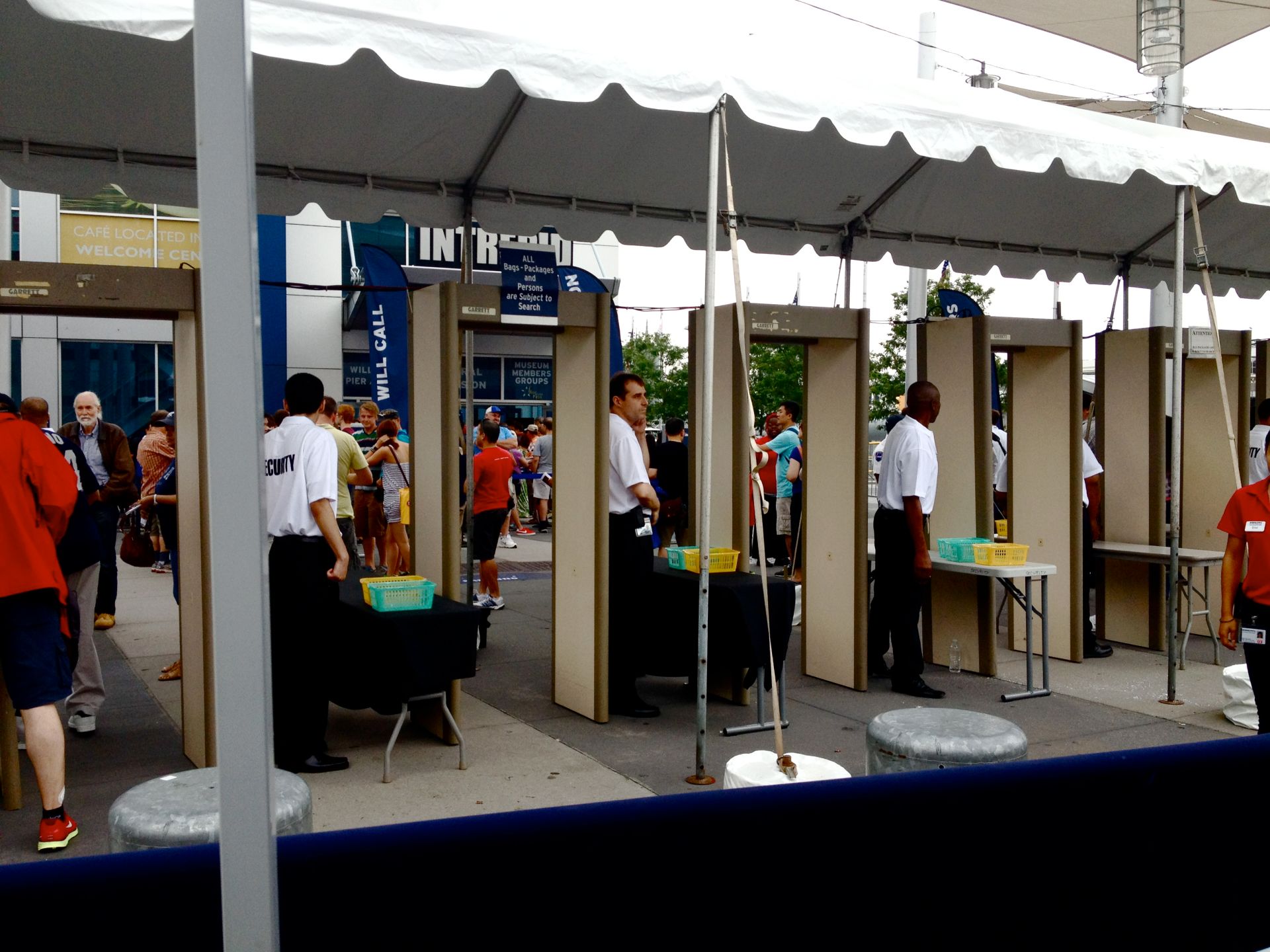 Entering the museum was a little more difficult because of the big event.
Advertisement 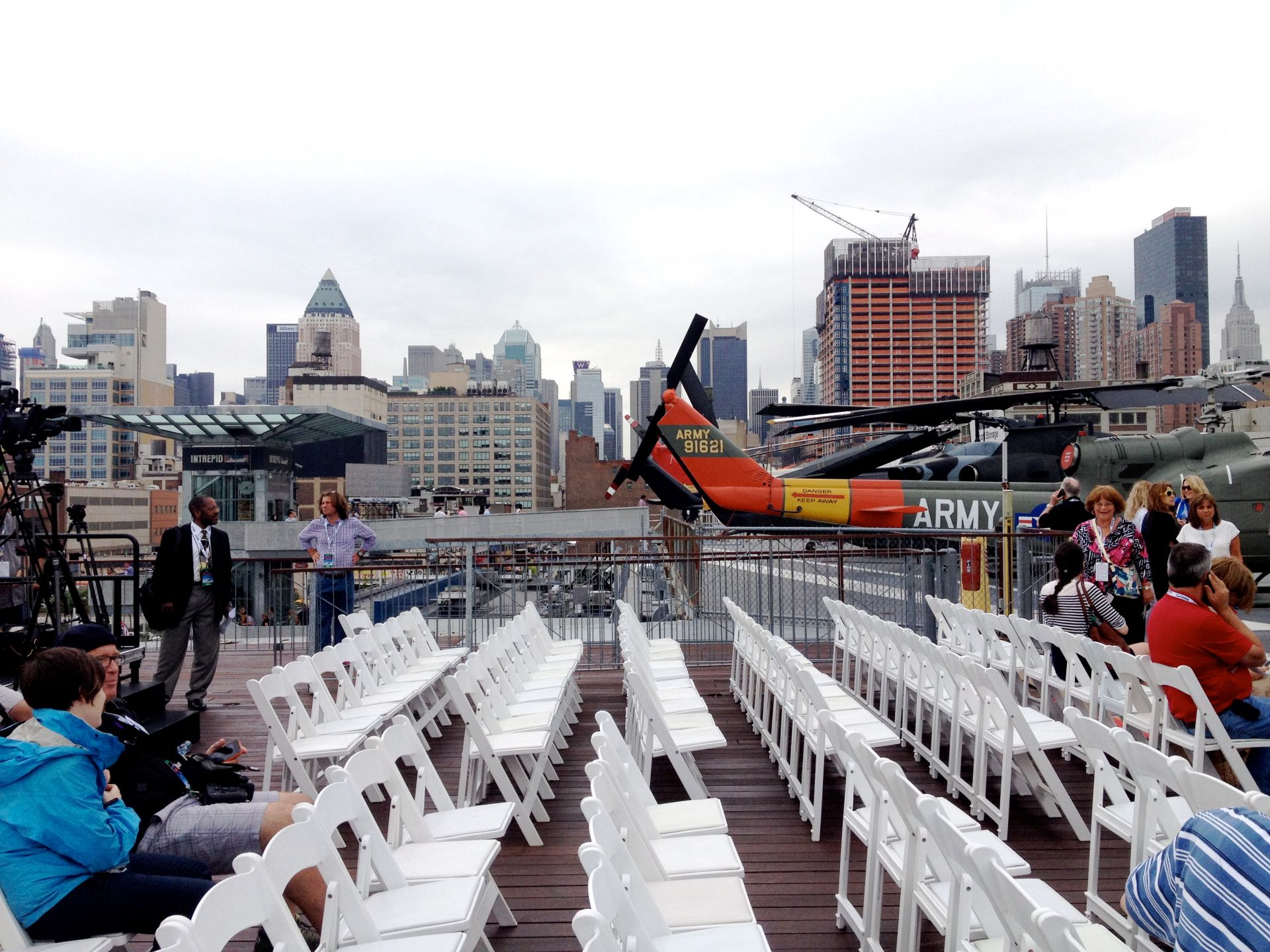 Crowds came out despite the rainy weather to the roof of the Intrepid. 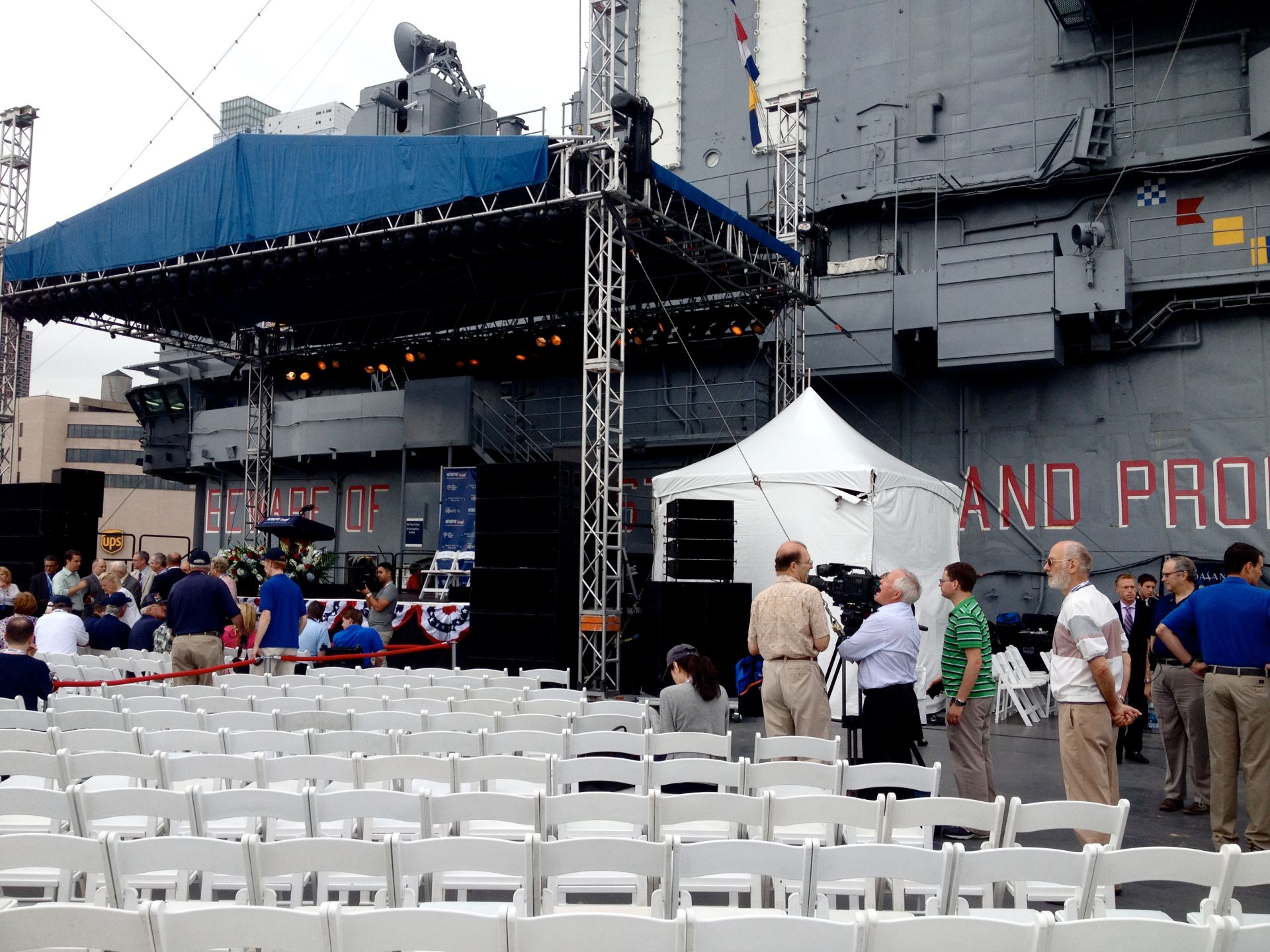 Rows of white lawn chairs were positioned on the flight deck of the Intrepid for the ceremony. 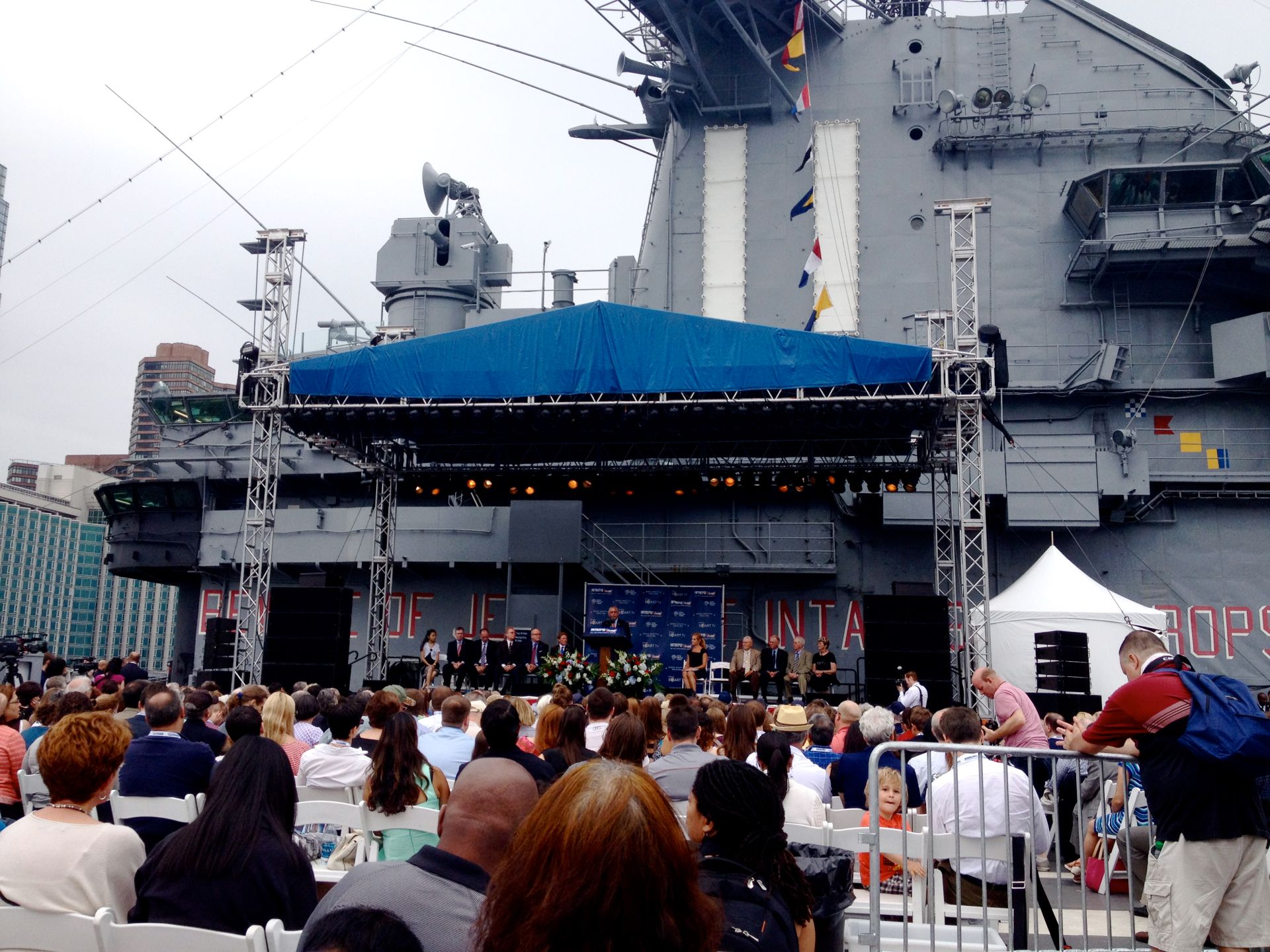 Speeches were given during the ceremony by Susan Marenoff and Charles F. Bolden Jr.
Advertisement 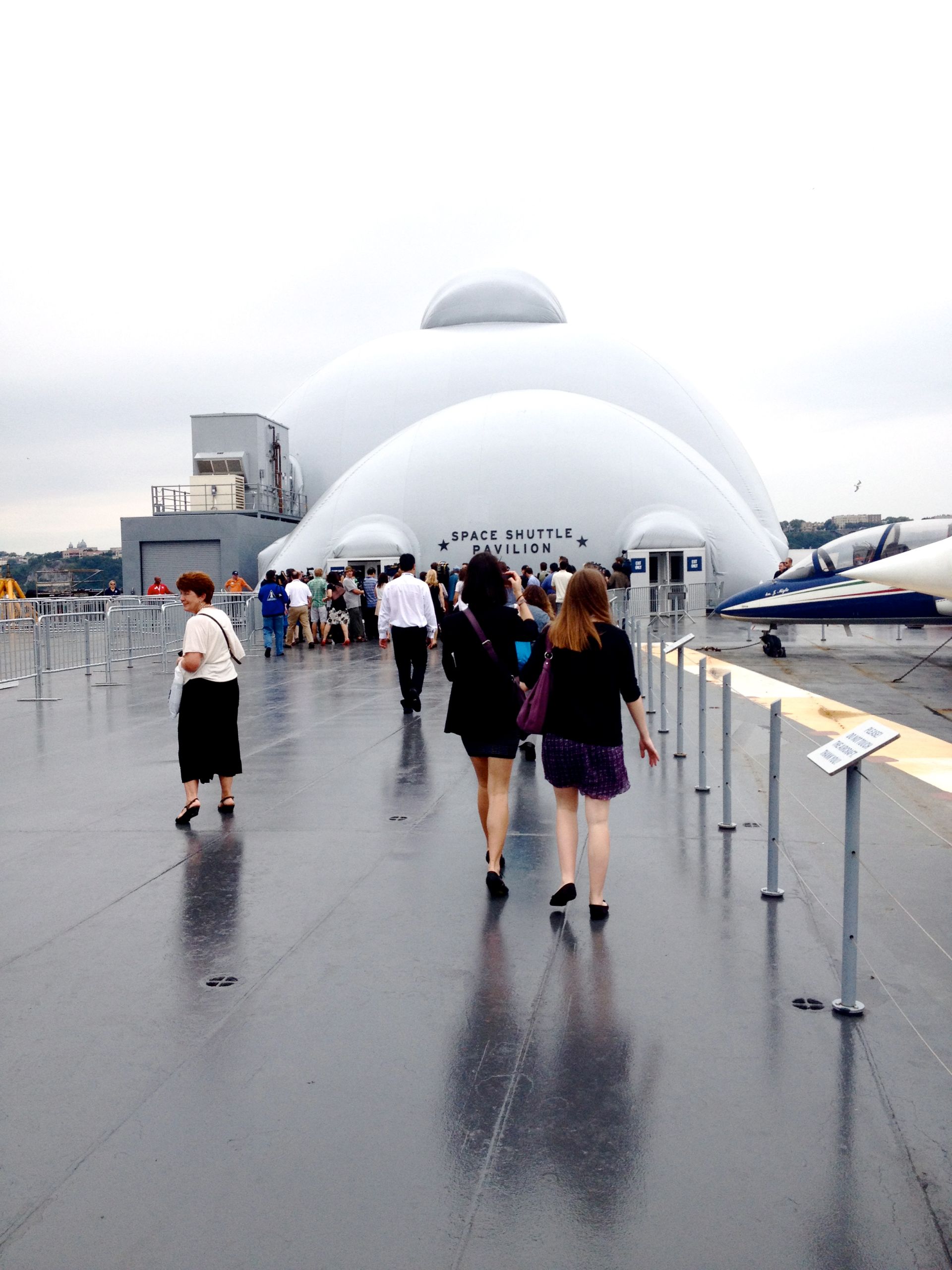 Ceremony attendees were the first to enter the new pavilion. 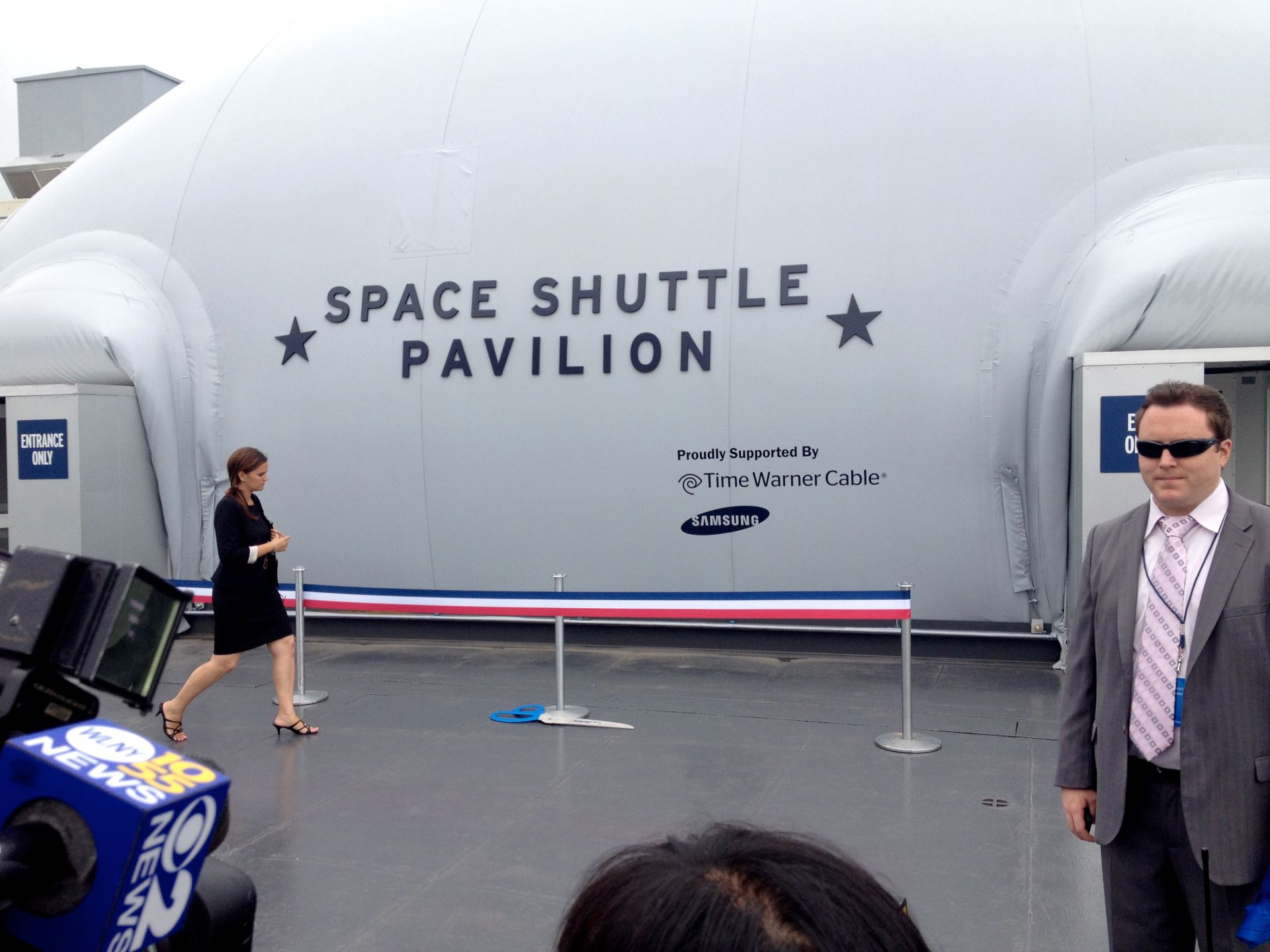 The ribbon cutting was officiated by Intrepid President Susan Marenoff. 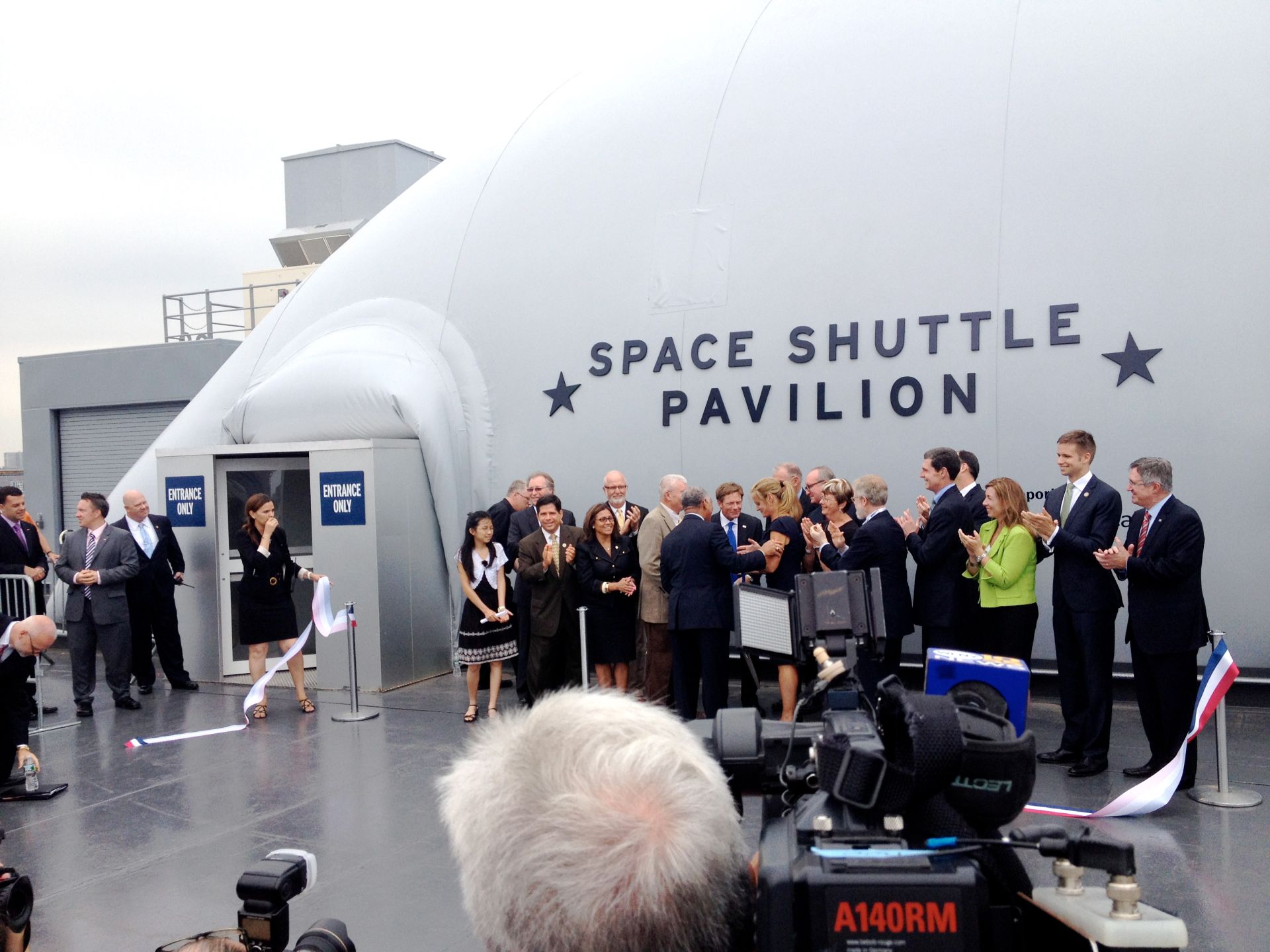 Intrepid execs gathered in front of the pavilion for the hasty ribbon cutting before the rain began again.
Advertisement 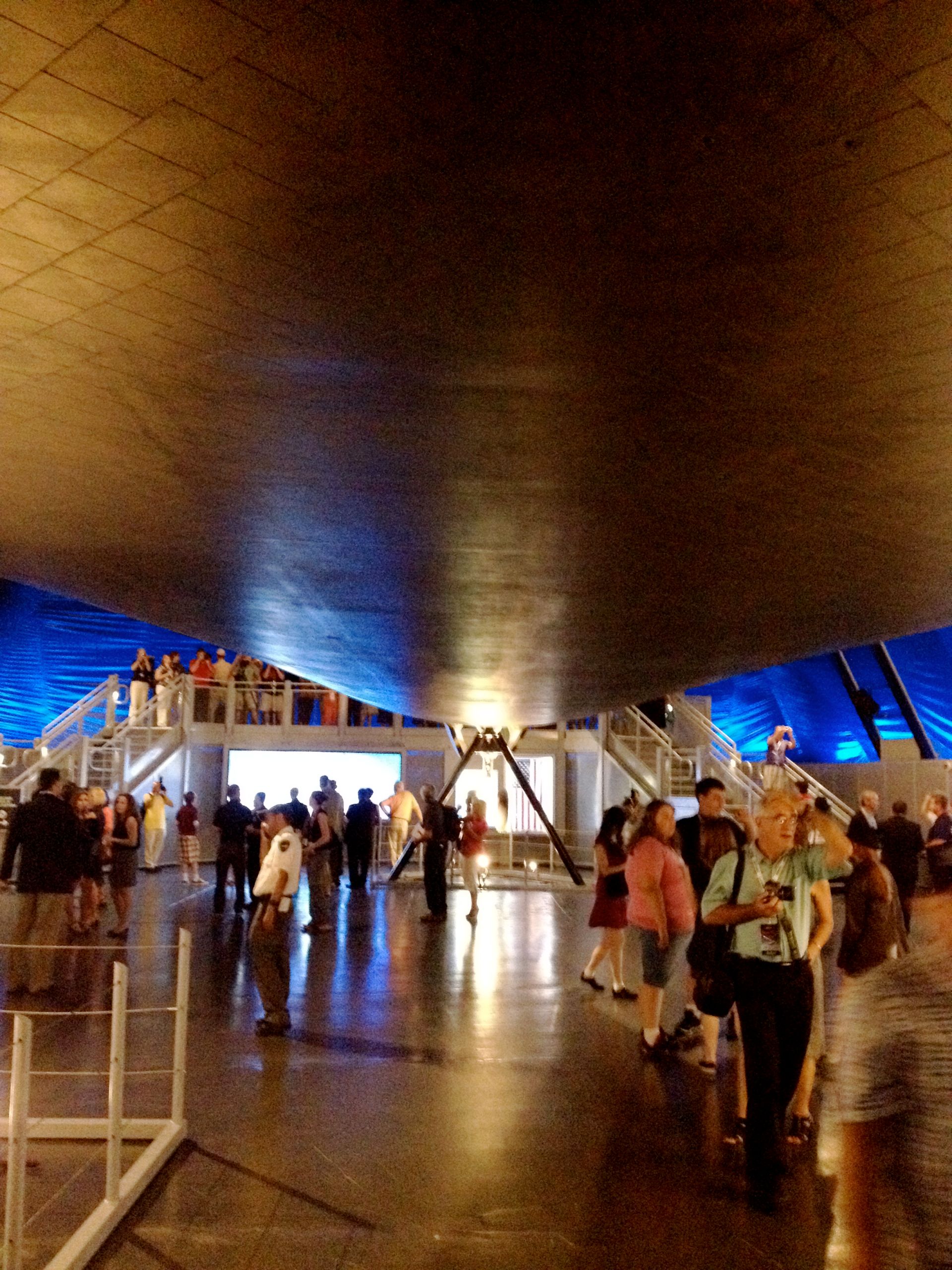 Visitors cam contemplate the huge mass of the craft from directly underneath it at the new exhibit. 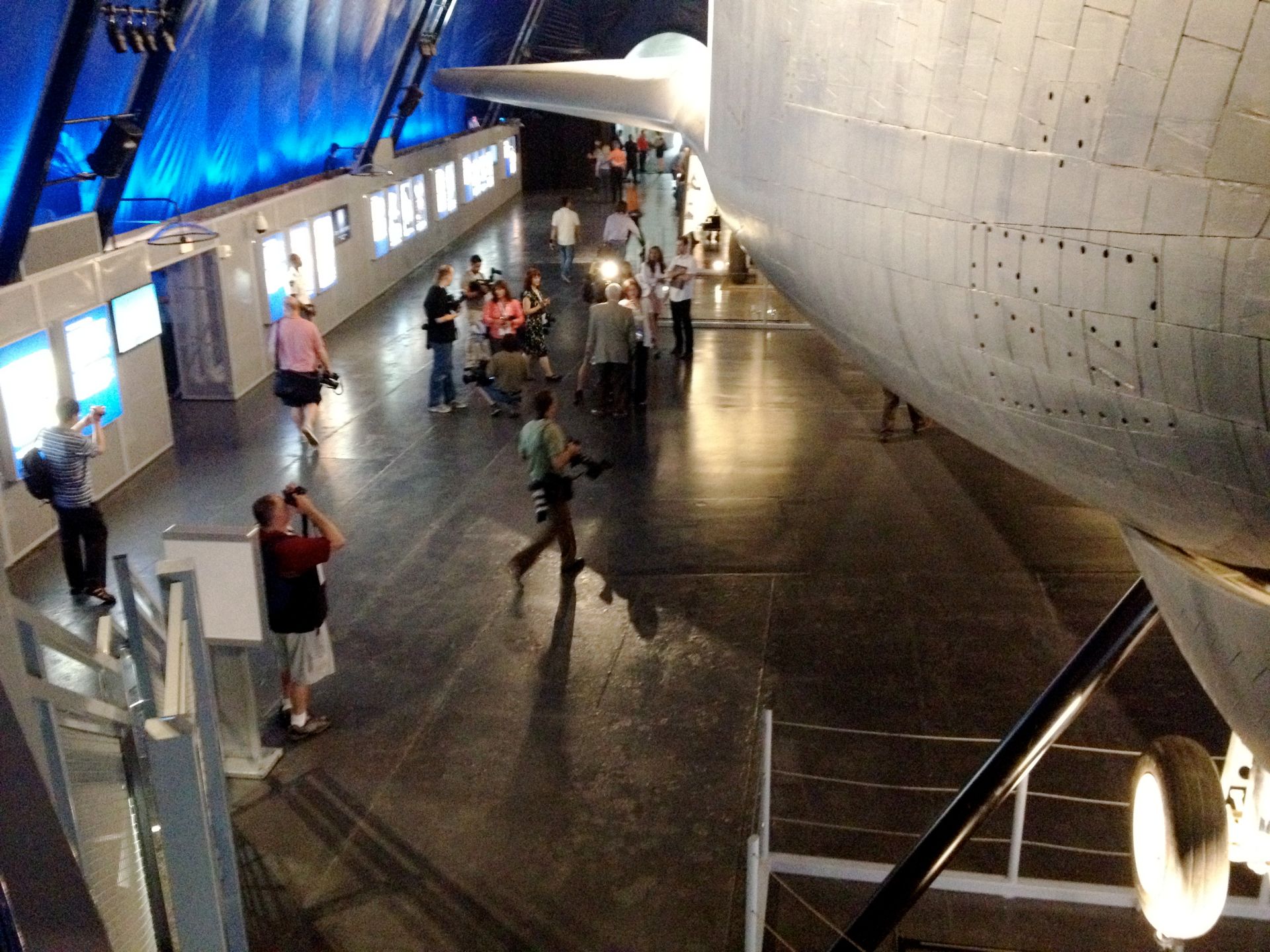 From the exhibit's balcony, visitor's can look down on the entire pavilion. 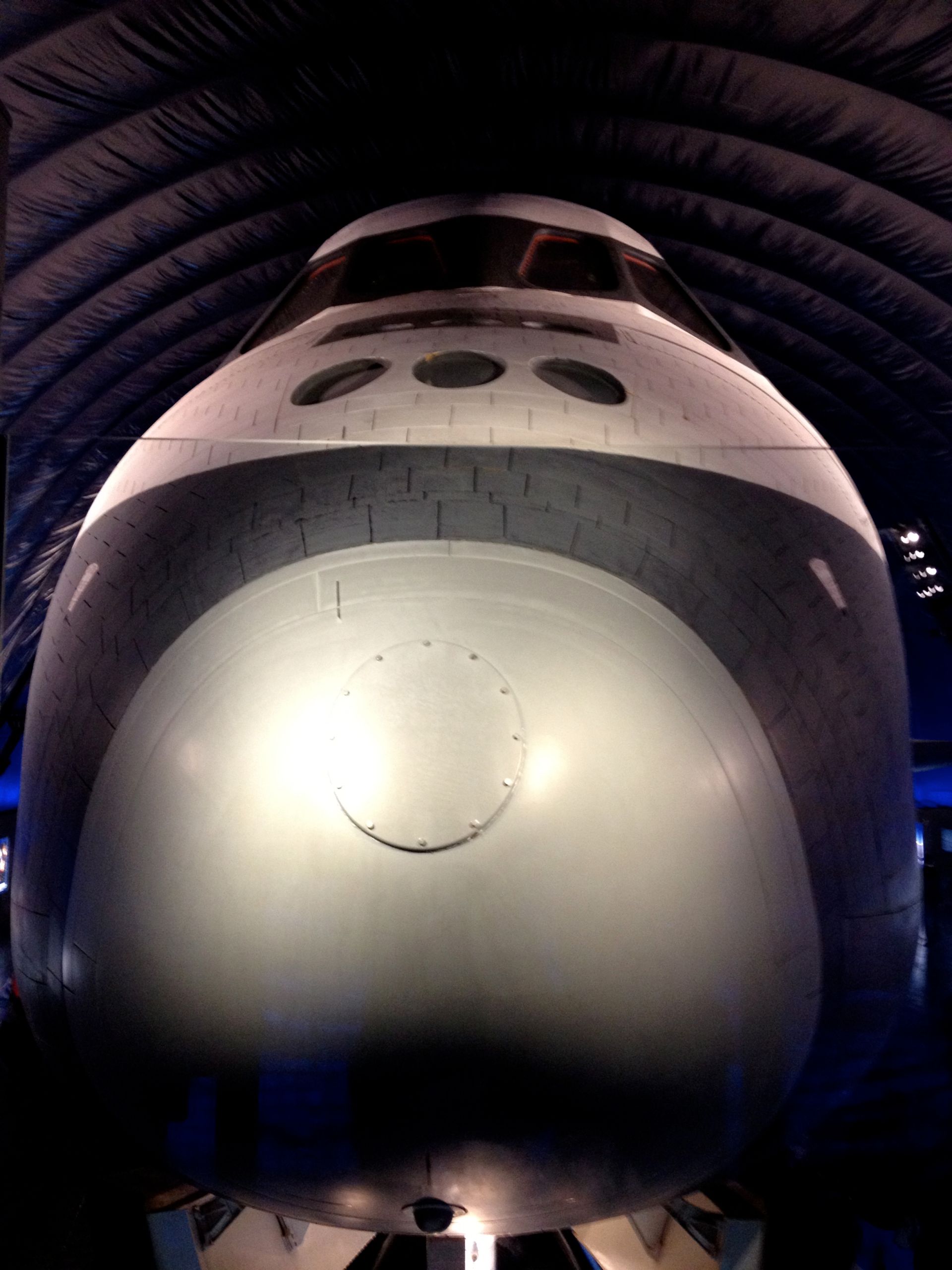 The shuttle was originally going to be called the Constitution, until a write-in campaign to the White House by trekkies in the 1970's begged for it to be named after the Star Trek vessel, the Enterprise.
Advertisement 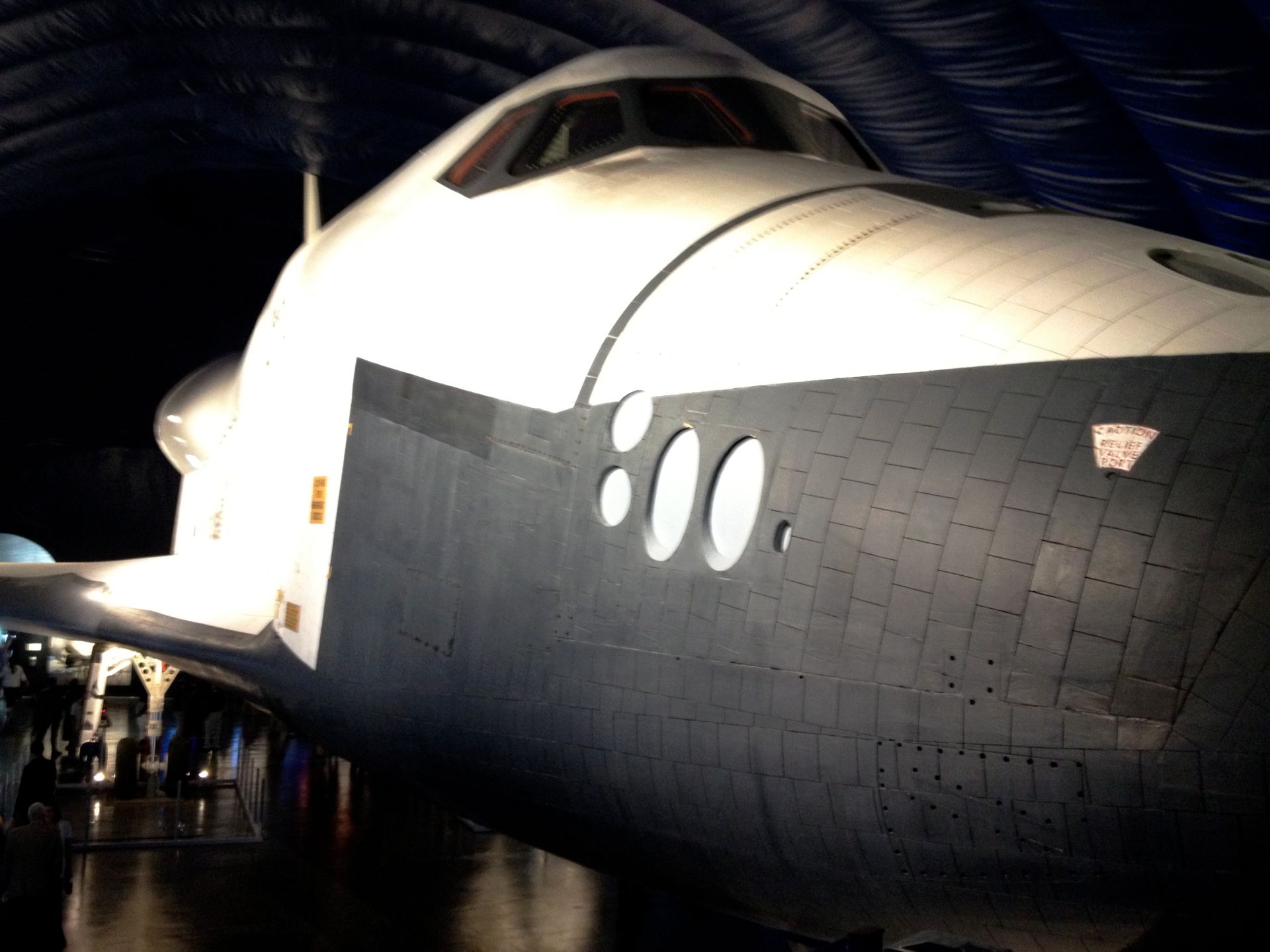 After traveling to many locations around the country, the Enterprise finally has a home in New York City. 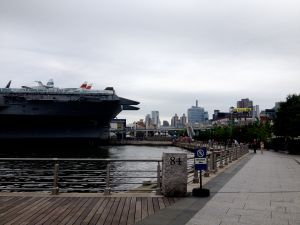 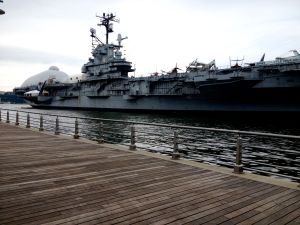 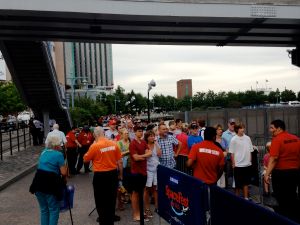 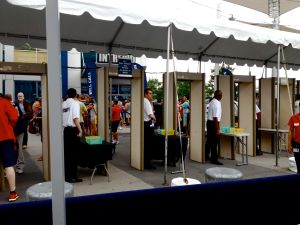 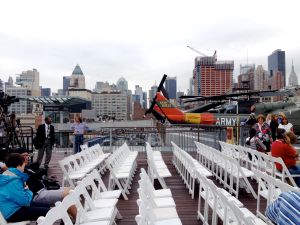 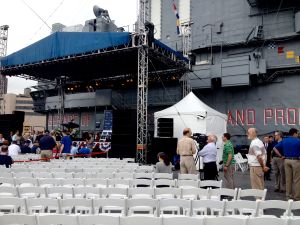 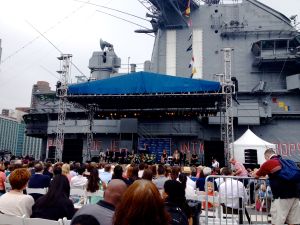 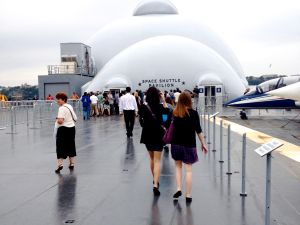 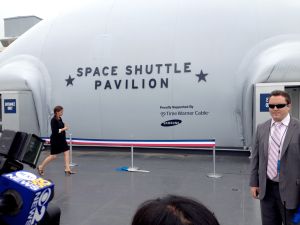 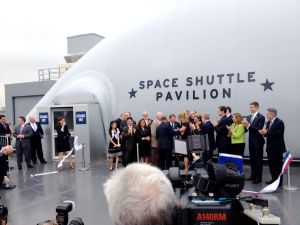 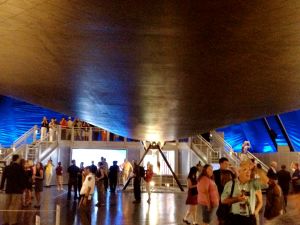 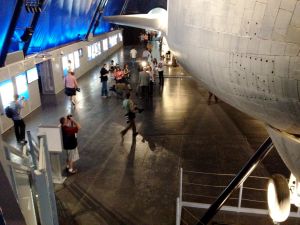 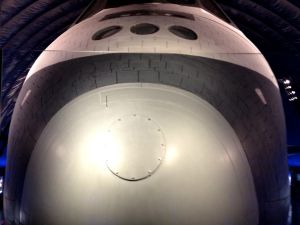 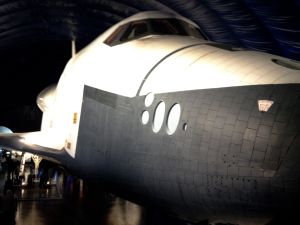 Susan Marenoff, president of the Intrepid Sea, Air and Space Museum, is quick to warn us that she is not an expert on education. But still, she told The Observer at this morning’s opening of the museum’s new space shuttle pavilion, in her estimation of today’s youth, “The interest in math and science is not great.”

There we were—a young journalist—standing on the viewing deck of the recently erected bubble pavilion on the top level of the museum . From our elevated post we were eye-to-eye with the cockpit of the Enterprise, the shuttle that will be housed in this temporary structure until it finds a more permanent home on the premises. Just inches away from the craft’s enormous nose, Ms. Marenoff continued, “If the Intrepid can play a role in stimulating minds and getting them excited about science again by having the Enterprise here, that’s important to us.”

When The Observer arrived at the Intrepid for the pavilion’s ribbon cutting ceremony earlier today, the clouds were nearly as gray as the body of the massive boat. We couldn’t help but wonder who would forfeit their entire Thursday morning, present company excluded, to sit outside on the flight deck of a boat in on and off drizzles of rain?

The answer seemed to be, with the exception of  those being honored, a handful of astronauts, the original crew of the intrepid and some space buffs, the very kids Ms. Marenoff was talking about, who were excited at the prospect of seeing a real live shuttle in their very own city.

The Enterprise didn’t have an easy trip here. Even after it had traveled to space and back, it still had to be lifted from Washington D.C. to John F. Kennedy international airport in April, and then up the Hudson river by barge. Then, it was craned onto the flight deck of the museum to its home in the pavilion. The ceremony celebrating its reveal to the public featured speeches by a number of affiliates with the museum including Ms. Marenoff, as well as Charles F. Bolden Jr., administrator of NASA.

The Observer caught up with Mr. Bolden inside the pavilion after the ceremony ended, and he told us its not easy to get children excited about science. “I think our biggest obstacle is getting them exposed to what’s available,” he told us. “This exhibit is great. Having a kid from New York City be able to stand under a shuttle, I mean, that’s incredible. It’s different than Googling or looking at stuff online.”

Mr. Bolden told us that his generation was enamored with space travel because so many were inspired by the moon landing.  “I was in flight school at the time,” he told us. “And I remember being in front of a black and white TV and watching Neil Armstrong. Even though I had no inkling of going into space training at the time, it captured my imagination.”

For those without an iconic moment like the moon landing in their recent memory, Ms. Marenoff told us the Enterprise’s arrival to New York City can offer some comfort. She told us that when the Enterprise arrived in New York City and did a fly over before landing at JFK International Airport, people young and old gathered in nooks of the city to watch in what she calls “a  very New York moment.”

“The over-forty generation remembers all of these missions and are very sentimentally attached to it,” Ms. Marenoff said of the space programs. “For the youth who don’t remember, having the enterprise here is just cool, for lack of a better word.”

Cool it was. As The Observer set off across the exhibit to track down the main attendees and targets of the Enterprise exhibit, children ages 9-12 weighed in with their opinion about the massive shuttle overhead. And guess which adjective they all chose?

“It’s pretty cool,” nine-year-old Jordan Quiles told us, in a short break from walking around the exhibit with his mom and dad.

Meanwhile, another young attendee told The Observer the exhibit inspired him with grand aspirations for the future. “I think that I would like to discover a new planet or drive a space shuttle that moves at a very fast speed,” twelve-year-old Gabriel Soluri said.

So, as they say at NASA, mission accomplished.

Meanwhile, the target on children elicited a different response by some of the older visitors, namely the original crewmembers of the Intrepid.

“I have to bring my grandchildren,” Mark Horvath, told The Observer.

A few moments later across the room, without missing a beat, Richard Mills told The Observer the ceremony gave him the same idea. “We’re planning a trip with our grandchildren,” he told us. “It’s going to knock their socks off.”