Each year, there are upwards of 3,500 serious injuries resulting from traffic accidents. The NYPD has ten times as many officers, yet it only assigns 19 of them to look into such incidents and investigates less than 1 in 10 as a result. Even then, investigations take place only when those involved are dead or believed to be dying. Sometimes they die without an investigation because on the scene, officers believe the injured will make it.

Members of the City Council and families who have lost relatives on the road arrived on the steps of City Hall this morning to decry what they consider a lack of enforcement and announce the introduction of a set of bills and resolutions they hope will impel the police department and the Bloomberg administration to take action.

The problem for the council is that it has little control over the police department, so the new proposals are more public requests than public demands.  There is the possibility to overwhelm Mayor Bloomberg and Police Commissioner Ray Kelly with a wave of favorable public opinion (see: stop and frisk) but that does not always work (see: stop and frisk).

“The mayor and Commissioner Kelly could do everything we’re asking for today if they wanted,” Brooklyn Councilman Brad Lander said. They also could have done it yesterday, or the day before, or years ago, when advocates started asking for it in the face of accidents. It is clear they do not want to, and may not ever, even as the council tries.

“Many like to criticize, but traffic fatalities are at the lowest level in city history and we now have 30,000 fewer injury crashes per year–30,000 fewer per year–than we did a decade ago,” Bloomberg spokesman Marc LaVorgna said in an email. “Those results did not happen by accident–it’s due to the aggressive enforcement and safety work of the NYPD and the traffic engineering work the Department of Transportation.”

The issue seems to be not whether or not the streets are safer—indeed they are, and the administration may now find itself a victim of its own success—so much as family’s inability to get information, and thus solace, about their loved ones. At times, the department has been accused of obfuscation and obstruction. The NYPD public affairs department did not respond to numerous requests for comment.

The council believes the city can do more, and it has started with a package of legislation proposed by Brooklyn Councilman Steve Levin—this is a big issue in the borough it seems, not least because it is the most populous and straddles the line between lots of walkers and lots of drivers; Councilwoman Tish James was also on hand.

To begin with, Mr. Levin wants the number of officers trained in accident investigations way up, from the 19 currently assigned to the Accident Investigation Squad to at least five officers per precinct. He also wants the city to investigate all serious accidents, defined as those causing considerable injury to a limb—an issue outlined in state law. He would require officers to track the speed, sobriety and responsibility of the driver in an accident, a factor not always considered, as well as requiring officers to file a complete crash report and the department to publicly outline its crash response plan.

Mr. Lander and Bronx Councilman James Vacca, chair of the council’s Transportation Committee, are also proposing a task force made up of representatives from various city agency’s and groups to come up with recommendations for the department in tackling traffic accidents.

“Our traffic investigation system is fatally flawed,” said Queens Councilman Peter Vallone Jr, chair of the public safety committee. “If someone backs through an intersection at 50 miles an hour but doesn’t kill anybody, right now, they’re only facing a traffic ticket, and only if a police officer saw it. As a former prosecutor, I can tell you, that is reckless endangerment.”

Paul Steely White, executive director of Transportation Alternatives, said a survey his group did found no police departments in the U.S. or Europe that did not conduct an investigation of all serious accidents.

Two New Yorkers had join the politicians to share their story of roadside tragedy, a son who lost a father and a husband, his wife.

Jake Stevens recalled how a drunk driver ran over his wife. “This drunk driver who killed my wife last year is going to get away with a driving violation” for driving without a license, he said. Because no investigation was done, it is also difficult for families to seek civil damages.

Jay Deter lost his dad Ray last year, when he was hit by a 24-year-old driving a Jaguar, suspected of speeding down through Lower Manhattan, where Ray Deter was on his bike. “He was hit so hard, he shattered the windshield, shattered the moon roof, before landing on the ground,” Jay Deter recounted, his hands shaking. His dad lived for six days in a coma before eventually succumbing to his injuries. By then, all signs of the accident had been erased. The only charges filed were for possession of marijuana.

“The message we are sending by doing nothing is that nothing is going to happen to you if you break the law,” Mr. Greenfield said. 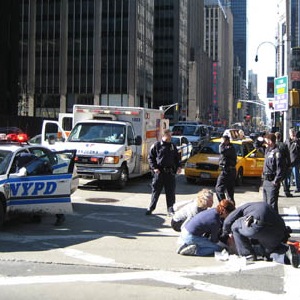