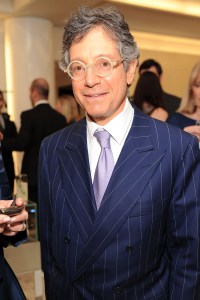 After releasing an official statement regarding the exit of Paul Schimmel, the long-time chief curator at the Museum of Contemporary Art in Los Angeles, as well as the resignation of the museum’s four artist-trustees, MOCA’s director, Jeffrey Deitch, has commented on the record with the Los Angeles Times about the situation.

The interview, described by the Times‘ Reed Johnson as “wide-ranging,” addresses the issue that Eli Broad, MOCA’s top funder, “may be positioning himself to take control of MOCA and its collections should the museum founder.” Mr. Broad will be opening his own museum across the street from MOCA in 2014. Mr. Deitch said:

It is fantastic for this museum that Eli’s building his building across the street. We need more critical mass here…Eli has been an absolutely great patron with us. He’s so totally supportive…I know that there’s this conspiracy theory. It doesn’t make any sense. That’s not the case.

Mr. Broad also denied the claims that he would attempt a takeover, according to the Times. As of now, there are no plans to replace Mr. Schimmel and guest curators will take his place. In an essay The New York Times, Roberta Smith, that paper’s co-chief art critic, responded to the situation with a kind of indictment of both Mr. Deitch and Mr. Broad.

For all his missteps, though, it is much too simplistic to blame Mr. Deitch alone for the air of crisis that now surrounds the museum. He has certainly hurt its image and he has failed to make much of a dent in its more urgent financial problems. But he did not create those. They preceded him by many years and are part of a tortuous history with many players. The museum has long been financially fragile; its board has rarely provided the kind of financial support that an institution of its quality requires and deserves. It continues not to, which brings us back to Mr. Broad…Given Mr. Broad’s fraught history with other Los Angeles museums, his denials about taking over this one remain hard to trust.

Mr. Deitch also defended his program to us when he confirmed the news that the museum would host an exhibition about the history of disco curated by James Murphy. He said: “I urge you to look into what our program really is. It’s such a rigorous program with very strong historical exhibitions. I think before people start railing on about the so-called dumbing down of MOCA, they should see what we’re actually doing here.”