Arizona senator and former presidential candidate John McCain blasted President Barack Obama in an appearance on “Michigan’s Morning Show” on WJIM radio today in which he criticized the president’s performance on the economy, described the process that led to “Obamacare” as “the sleaziest” and complained about the lobbyists’ proximity to the White House.

“It’s the worst thing I’ve ever observed and the American people obviously deserved a lot better than what we got today,” Mr. McCain said.

Mr. McCain invoked the oft-repeated quote where President Obama said of his plan for the economy “if I don’t have this done in three years, then there’s going to be a one-term proposition.”

“This is a President that said: if he couldn’t get it done in four years—i.e., restore the economy—then he didn’t deserve a second term,” said Mr. McCain.

The line was specifically referring to whether the TARP bailout program would merit his high cost, but the line has become a favored talking point for Republicans.

“This is a President that’s now saying he should have ‘told a better story’ in his first two years as President? What he really shouldn’t have done is foist off Obamacare on the American people in the sleaziest process that I have ever seen in the United States Senate,” he said.

He also accused the president of hosting lobbyists in the official White House guest house after vowing to remove them from the White House.

“He said he wouldn’t have any lobbyists in the White House? He didn’t. He had them in the Blair House,” Mr. McCain said. “It’s the worst thing I’ve ever observed and the American people obviously deserved a lot better than what we got today.”

The Obama campaign has previously tried to push the idea that Mr. McCain, who ran a bitter primary race against Mitt Romney in 2008, would not approve of the way Mr. Romney is running his current campaign. Mr. McCain endorsed Mr. Romney in January, but remained quiet when the Obama campaign first attempted to invoke him as part of an attack on Mr. Romney. If Mr. McCain continues aggressively going on attack for the Romney campaign, it could help Mr. Romney capitalize on the Arizona Senator’s appeal among swing voters.

Listen to an excerpt of Mr. McCain’s radio interview that was distributed by the Romney campaign below. 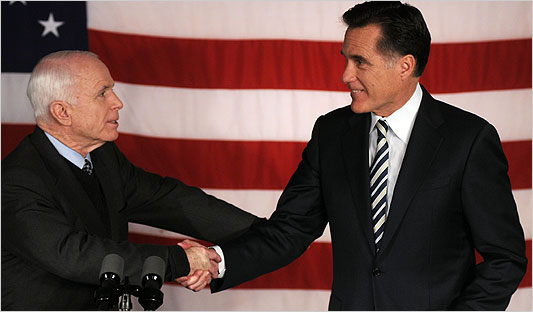