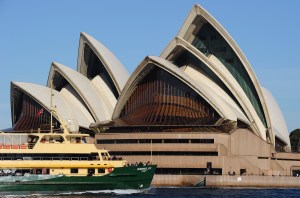 With the Biennale of Sydney now open Down Under, its organizers have announced that Juliana Engberg will serve as artistic director of the next edition, which arrives in 2014. Art Review‘s website has the news.

Ms. Eisenberg is currently artistic director at the Australian Centre for Contemporary Art in Melbourne. She has organized shows of work there by Nathan Coley and Joseph Kosuth, among other artists.

Though we have never been to the Biennale of Sydney, Artforum‘s Jane Somerville offered a fine look at the celebratory festivities surrounding its opening this summer. Here’s a taste of the scene on Cuckatoo Island, a location that makes it just about impossible to sneak in “[u]nless you’re a pro swimmer”:

Then once you’re in, tracking down your posse amid the thousand-strong crowd becomes a kind of choose-your-own-adventure exercise, entailing countless reunions with colleagues you haven’t seen for “ages” (meaning, since the last big hoopla opening). I spent an hour making my way to “the right of the cheese stand” only to realize that there were two—one at either end of the hall.