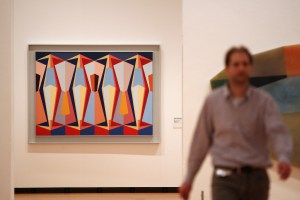 ‘Stage II’ by Karl Benjamin, on view in ‘Pacific Standard Time—Kunst in Los Angeles, 1950–1980, at the Martin-Gropius-Bau museum in Berlin. (Courtesy Getty Images)

Karl Benjamin, a celebrated Los Angeles–based painter of geometric abstractions, died on Thursday as a result of congestive heart failure, the Los Angeles Times reports. He was 86. Here’s Suzanne Muchnic in the Times:

“Working with a full palette and a vocabulary of stripes, squares, triangles, circles, rings and irregular shapes, he created tightly balanced compositions that seem to shimmer, vibrate or explode in space. His work fell out of fashion in the 1970s and ’80s, but he made an astonishing comeback in later years when his paintings suddenly looked fresh and smart to younger artists, critics and curators.”

Indeed, pay visits to a few galleries downtown or in Brooklyn today, and you’re likely to see some paintings by young artists in a style similar to Mr. Benjamin’s: crisp waves of color, carefully ordered. As Ms. Muchnic notes, when he helped develop the language in the 1950s, it was a potent counterpoint to the prevailing gestural mode favored in abstract painting of the time.

During the Getty’s recent Pacific Standard Time initiative, Mr. Benjamin’s work was including in a number of exhibitions, including “Experiments in Abstraction—Art in Southern California, 1945 to 1980” at the San Diego Museum of Art and “Claremont Modern: Post-War California Dreaming” at the Claremont Museum of Art in Claremont, Calif. That exposure, blogger Tyler Green recently argued, “demonstrated that a Benjamin retrospective is long overdue.”

In a sense, Mr. Benjamin’s career could serve as an object lesson in the fact that only a limited amount of information and art travels freely among cities, even today. He had numerous one-person exhibitions throughout California, but showed far less frequently in New York, typically in group shows.

Interestingly, one of the most important shows he participated in early in his career in New York was the Museum of Modern Art’s 1965 “The Responsive Eye” exhibition, which is back in the spotlight thanks to the New Museum’s current “Ghosts in the Machine” show, which includes Op art works included in that earlier exhibition.