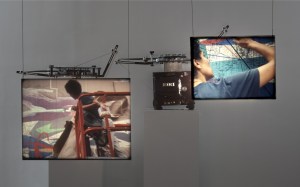 The studio of British artist Tacita Dean sits next to the Hamburger Bahnhof contemporary art museum in Berlin, in a building that conjures not so much the dire cookie-cutter Soviet architecture of many of the buildings in the city, but perhaps some horizontal equivalent from the rural U.S., complete with a loading dock for trucks and just one set of steep concrete steps that mean a bit of a walk to reach the door. Like many things in Berlin, it’s old and has been repurposed for something new and profound, and there might be an inclination to make some kind of metaphor here connecting antiquated buildings and Ms. Dean’s work with 16 mm film, though Berlin seems by leaps and bounds more adaptable.

“Everyone is just so rigid,” Ms. Dean said in her studio two weeks ago. She’d been discussing her campaign to save analogue film and the difficulties of trying to explain to Hollywood that they have, in fact, two mediums at their disposal—analogue and digital. At that moment, she removed her glasses and cupped her face in her hands.

“They’re so,” she said into her hands, and then pulled them away. “I shouldn’t say ‘thick,’ but honestly. The money people in cinema are quite ugly, actually. And it is just money. Unfortunately, we are going to get these people deciding what we see in the future. They aren’t going to digitize a French avant-garde film.” Andrei Tarkovsky, a friend has pointed out to her, doesn’t make you cry on DVD.

Ms. Dean, who has lived in Berlin for the last 12 years, is by no means strictly a film artist—her work for the current edition of Documenta, “Fatigues,” features a six-panel installation of blackboard drawings of massive white mountains in Afghanistan—but if you managed to catch her “Five Americans” exhibit at the New Museum last month, you know that she’s taken the medium to new heights. The show documented Merce Cunningham, artists Julie Mehretu, Claes Oldenburg and Cy Twombly, and art historian Leo Steinberg in their natural working environments, all on film with the exception of Mr. Steinberg, who’d only allowed Ms. Dean to photograph him. She’s made over 40 films in her career and began making works like these in 2004, with the artist Mario Merz, though the films from the New Museum show all came from the past three years. There’s no irony, in fact, that the show was named for its subjects’ nationality, she said, even though Mr. Twombly was a longtime expatriate, Mr. Oldenburg was born in Stockholm, and none of them are particularly associated with flag-waving nationalism. It was simply the only way to group them.

There’s something of the biopic in these movies, especially the film of Mr. Cunningham, which clocks in at nearly two hours and feels appropriately large-scale, shot during a rehearsal in a Ford factory overlooking the San Francisco Bay. In it, Mr. Cunningham directs dancers by pointing and rarely uses verbs more complicated than “go” (e.g. “You go, then he goes, then while he’s going, she goes.”), funny diction for a man in a wheelchair. It contains an eerie finale in which the dance is nearly perfected and the dancers are seen in silhouette as a red sun sets behind them. These shots are then interspersed with side views from a second camera that show the dancers in full color, at work, on the move, as they’d normally be observed. It’s a reminder that the viewer actually watches nothing more than projected light passing through colored shapes. The film debuted in 2009, and Ms. Dean would later work with similar ideas for her monolithic, vertical work FILM (2011) for the Turbine Hall of London’s Tate Modern, a tribute to the medium, closely tied to her current efforts to protect photo-chemical film (as it’s somewhat pejoratively called in the U.S.).

The story of the death of analogue film has been written over the past few years, when major studios began to force movie theaters to upgrade their projectors so that they could play new films on a digital hard drive format, much cheaper overall for the studios to ship. This has led to the closure of labs that develop 16 mm and 35 mm film, despite most agreeing that analogue film, far from being antiquated, does the job better than its digital counterpart (35 mm advocate Christopher Nolan shot The Dark Knight Rises on the older format). The analogue side’s victories are measured in inches—Ms. Dean recently obtained a formal promise from camera manufacturer Arri to reopen their 16 mm labs and develop the film for the next 10 years.

She now wants to have analogue film protected by UNESCO, in the same way that organization protects world heritage sites like Stonehenge. Cinematographer Guillermo Navarro planted the idea in her head at an event in Turbine Hall, and it has since become an appealing path, in the absence of any others, even though it’s unclear exactly what such protection would mean for the medium.

“It is quite like conceptual artwork,” she said, responding to a suggestion that UNESCO protection might take that form. “It’s worryingly conceptual, but maybe we’re at that point. And now that I have this consortium of people supporting film, we need to fund it so someone else takes the reins. Some minister can do it, because at this point, I can’t.”

“Some people say, ‘You’ve spent your whole career being obsessed with time,’” she said, “or some people say ‘with obsolescence.’ The obsolescence thing is something that has taken me by chance, or by surprise. I’m not courting obsolescence at all, contrary to what people think. Everything I seem to want to do ends, more or less.”

It’s not that the medium is the message in Ms. Dean’s films, but neither is it an objective observer. It’s difficult to describe the way in which her artist documentary seems itself unobtrusively alive. The subjects feel natural and intimate in a way that biopic characters do not (she spoke disparagingly of silver screen portrayals of Warhol, Pollock, and especially of Kurt Douglas as van Gogh: “It’s terrible!”), all this a testament to the editing that Ms. Dean does on a giant manual editing station at her studio. The neutrality of the films, which show Mr. Twombly eating in a diner and Mr. Oldenburg examining a personal curio collection, is not easily achieved, and this was something she found herself discussing with Mr. Steinberg. “One of the biggest problems of being a good writer or a good artist is that the work appears effortless,” she said. “When, of course, it contains a lot of labor.”

Her shots don’t track or zoom, which gives them the appearance, at times, of windows. They were meant to resemble something like that in a version of the show that predated the New Museum’s last year, “The Line of Fate” at the Museum Moderner Kunst Stiftung Ludwig in Vienna, which had a complex architecture so that the films turned in on themselves in the square “American heart” at the center of the exhibit. In the case of Mr. Twombly, whose film takes his given name, Edwin Parker, the static look was unintentional. A cameraman flipped a wrong switch, and she’d lost a day and a half of footage from two days of shooting, nearly her entire second camera. But, as she pointed out, Mr. Cunningham and John Cage embraced the chaos and serendipity the way she has come to.

“The thing is, I’ve loved the work of Cy Twombly my whole life. From an undergraduate student,” she said, and until about 2007, she “had no idea what he looked like. It’s amazing if you think about it.”

Part of this came from his being notoriously reclusive, and we asked if she thought his impending death might have had something to do with his agreeing to be filmed.

“Well, you put your finger on it,” she said quietly. “I—of course it has become quite problematic that the people I film die.  Which is, of course, inevitable, but I do have a bit of a bad reputation as the Grim Reaper.” She paused. “I think they know damn well. Even the first artist, Mario Merz, he knew.” She raised her voice slightly. “I mean they do. These guys know exactly—these guys have controlled their lives the whole way through. They know exactly what they’re agreeing to.”

It was Mr. Twombly’s idea to be filmed in Lexington, Va., rather than Gaeta, Italy, where he’d spent most of his professional life. “How’d you like that hanging on your wall?” he says in a soft Southern accent, flipping through a Sotheby’s catalogue after he returns from lunch (earlier in the film, he reads a Financial Times lunch interview featuring his dealer, Larry Gagosian). She said she thought he wanted to be perceived as a local.

“I find England quite difficult, weirdly,” she said of her own expatriate status. The question of whether or not she’d ever move back has already been answered for her, since she has rheumatoid arthritis so severe that she walks with a limp. “I love Cornwall, but I could never live there because of the damp. So it’s strange. And whenever I think, ‘Do I want to be buried here?’” She trailed off. “I don’t know if I do.” She smiled ironically. “We’ll see.”

The most elegiac of her New Museum work was the film of Mr. Cunningham, who died between the time it was filmed and edited—she wouldn’t have made it so long had she not felt the burden of his legacy in the editing room. Serendipity again seems to work in her favor here. Birds pass only occasionally but always at just the right moment and seem to know what’s going to happen. In the final performance, the head of Mr. Cunningham’s silhouette droops, and he needs to be rolled away. He’s fallen asleep but must be awake by the end, because as the dancers finish he claps.

Next up is a film tentatively titled J.G., inspired by J.G. Ballard, that will debut in February 2013 at Arcadia University in Philadelphia and was shot on 35 mm, like FILM. She’s gathered all the shots, of the American West, but has yet to watch any of them. Right now she has no idea how it’s all going to come together.