State Sen. Joe Kyrillos, who is challenging for a U.S. Senate seat, today unveiled a seven part job creation plan he says will put the country back on sound fiscal footing.

“We need jobs and my plan creates them by restoring fiscla responsibility, reforming the tax code, reducing unnecessary and burdensome red tape and restoring our nation’s place as the home of innovation,” Kyrillos said.

The Republican also received the endorsement of the National Federation of Independent Businesses.

“Senator Joe Kyrillos has proven himself to be a strong advocate for the small-business community,” said Laurie Ehlbeck, state director for the NFIB in a prepared release. “He has established a reputation in our state for supporting measures to help buisinesses thrive, and we need his leadership at the federal level now more than ever.”

As part of his jobs plan, Kyrillos said he favors a 20 percent reduction in taxes for all taxpayers, paid for “by phasing in a cap on some tax preferences and exclusions.”  The senate hopeful also called for a reduction in federal spending from 24 percent of the Gross Domestic Product to 20 percent.

While he dismissed a millionaire’s tax as a way to raise revenue, Kyrillos said he would not rule out additional taxes on some wealthy taxpayers including hedge fund managers, who pay a lower tax rate on income than average taxpayers.

Kyrillos had sharp criticism for the current administration’s job creation record, decrying an unemployment rate that has hovered over 8 percent for 41 months.  Asked how he can attack the national rate of over 8 percent when New Jersey’s unemployment rate is 9.6 percent, Kyrillos said things would be much worse if not for the policies put in place by the Christie adminsitration.  Boosting the national job picture will aid the state’s jobless rate, Kyrillos said.

Kyrillos said the campaign against incumbent Democrat Bob Menendez is all about jobs, a topic on which his opponent has been largely silent, he said. 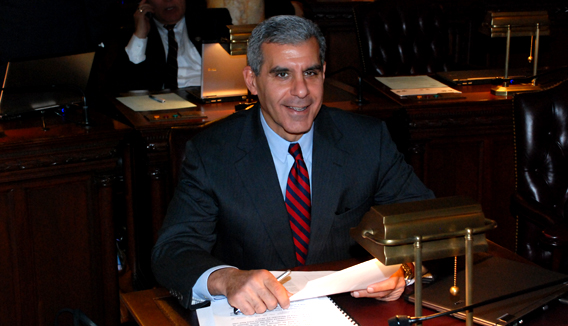