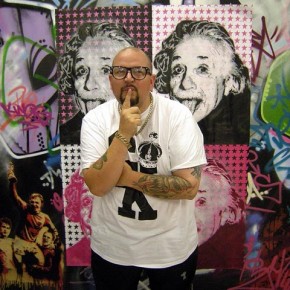 The British government seems to have a taken a drastic approach to graffiti prevention at the London Olympics. The Guardian reports that at least four men have been arrested in a sweep that included Darren Cullen, 38, who, far from being a no-goodnik, has designed a graffiti-inspired advertising campaign for Adidas.

The paper doesn’t have any details about the others who were arrested, but the cause for Mr. Cullen’s detention sounds a bit tenuous. From the piece:

…he was asked about a website he had set up two years ago on behalf of a client, frontline-magazine.co.uk. The website was “all about the history of graffiti”, Cullen said, but did not promote it. “I don’t condone or promote illegal graffiti,” he said. “I always say to young people: ‘Don’t do it. It’s no good for you.'”

As part of their bail conditions the four men may not ride public transportation or posess “any spray paint, marker pens, any grout pen, etching equipment, or unset paint.”