Madonna’s decorations land her in trouble in le Paris (YouTube)

Yesterday evening we all tuned in to watch the livestreamed concert of Madonna in Paris. And though we knew what to expect–nudity and swastikas have been part of Madge’s MDNA world tour since the beginning–she had already managed to rub the people of France the wrong way when she put up the Nazi symbol on the face of the new French party leader, Marine Le Pen. On Bastille Day, no less!

The leader of the far-right party has already threatened to sue the pop sensation, which she probably assumed would only help sell tickets.

The plan worked, sort of: turning her “small engagement” at the Olympia Club last night into a mob scene.


Madonna had told French publication Le Parisien that she wasn’t trying to insult anyone with her Bastille Day 3rd Reich stunt: “I’ve heard that a certain Marine Le Pen was upset with me…It’s not my intention to make enemies.”

Strangely, French concert-goers felt differently, as they swarmed the Olympia last night, booing the queen of poptroversy. Madonna has defended her use of the swastika in the show, saying that it was meant to highlight “the intolerance human beings have for one another.“

She forgot to mention they also inspire coverage, controversy, and sometimes mob scenes. (Only days after the Colorado shootings, she was waving an AK-47 around the stage in Scotland.)

Even though Ms. Le Pan had warned Madonna that “we’ll be waiting for her” if the singer tried her stunts in France, that did not stop Madge from livestreaming her show at Olympia. Perhaps she was hoping to using the footage of the angry crowds as part of her next multi-media performance. After all, if there’s one thing Madonna’s good at, it’s manufacturing controversy.

Here’s the raw footage from the show:


Madge left her set after 45 minutes of being heckled, leading the crowd to start chanting “Refund!” and “Slut!”

This is expected to be Madonna’s highest-grossest tour to date. 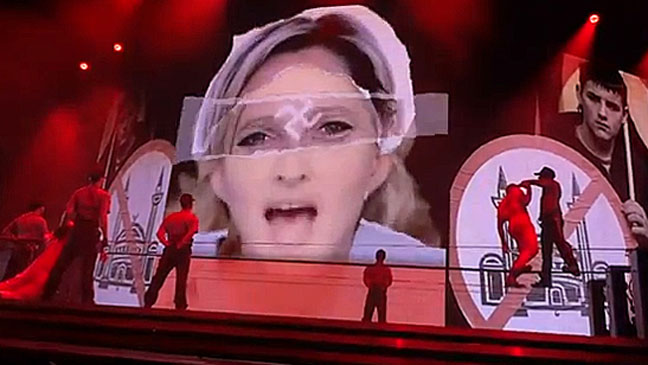