Remember Andrew Schiff? The man who watched his hopes for the good life slip away with the big bonus he had been hoping for in 2012? Stuck with a modest salary of $350,000, Mr. Schiff was forced to continue living in a cramped, dishwasher-less Cobble Hill apartment with his wife and two children.

“I can’t imagine what I’m going to do,” Mr. Schiff told Bloomberg reporter Max Abelson in February. “I’m crammed into 1,200 square feet. I don’t have a dishwasher. We do all our dishes by hand.”

The blogosphere was riveted by the plight of the “Wall Street Whiner” for several days this winter, so everyone should be happy to hear that Mr. Schiff’s story has a happy ending! The director of marketing for broker-dealer Euro Pacific Capital Inc. has purchased a condo at 35 Woodhull Street in nearby Carroll Gardens for $1.23 million, according to city records. Who says the American dream is dead?

This winter, Mr. Schiff told Bloomberg that the middle class, New York lifestyle that he had long striven for was beyond his reach, despite the fact that he was officially a one-percenter. Bringing home less than $200,000 after taxes, health insurance and 401(k) contributions, he could not afford his daughter’s private school tuition, renting a summer house in Kent, Conn. and upgrading from his 1,200 duplex apartment.

“The closing costs, renovation and down payment on one of the $1.5 million 17-foot-wide row houses nearby, what he called ‘the low rung on the brownstone ladder,’ would consume ‘every dime’ of the family’s savings,” reported Bloomberg.

“After saving 10 years for the down payment we got a walk up condo duplex in a converted brownstone about 50 yards west of the BQE,” Mr. Schiff wrote to The Observer in an email. (He remains the same amiable and accessible scapegoat for Wall Street greed that he was this winter). “My kids got their own rooms and we got the dishwasher. Its very nice, we are happy. First home I ever owned.”

Thrift and flinty determination! Mr. Schiff and wife Paxton Barnes even managed to bargain down the asking price from $1.29 million. It would seem that Corcoran brokers Kim Soule, Sherri Polin and Nicole Galluccio are not as hard to win over as the 99 percenters. Or at least they were willing to accept a little less commission when the owner, developer Woodhull Gardens LLC, consented to sell for less.

And guess what? The new place has 1,688-square feet. Besides more space, the four-bedroom, three-bath condo has “a huge private terrace off the master bedroom” and “jaw dropping views of Manhattan and the harbor.” There are 10-foot ceilings, “rich walnut wood floors,” and built-in speakers with an iPod deck, according to the listing. And it’s in an excellent school district—PS 58.

But what of the kitchen? Well, as Mr. Schiff and Ms. Barnes relax to the lulling whir and gurgle of their new dishwasher, they can gaze with pleasure at the stone counters, glass-tiled backsplash, Shaker cabinets, Liebherr and Bosch appliances and  a Bertazzoni range. Not bad!

The thing that really worries us, though, is that this place isn’t all that fancy or large. What does it mean for the rest of us penurious New Yorkers when you need to earn a $350,000 salary and save for 10 years to buy a place like this? 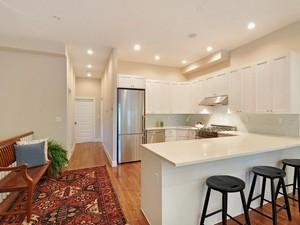