The iPhone 4S ads have drawn some A-list names to promote its new feature: indentured robotic servant Siri. Because Apple won’t rest until the singularity is here and everything Isaac Asimov predicted comes true.

The latest spot, released yesterday, stars director Martin Scorsese in the back of a taxi cab. In 1976’s Taxi Driver, it was Mr. Scorsese himself who made the cameo as a creepy backseat passenger. Now, he’s returning the favor.

See if you can spot the Taxi Driver shout-out in the iconic director’s commercial.

Did you see it? As Redditors pointed out, Mr. Scorsese is apparently still riding in Travis Bickle’s cab: the car has the same license plate as the one in the DeNiro film. Even though the Tribeca area has been gentrified since Taxi Driver was first released (thanks in large part to Mr. DeNiro himself), it’s still nice to know that the city is still be kept safe by vigilante cab drivers…at least those willing to sell out for a phone commercial. 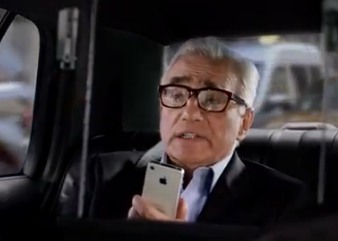