UNION CITY – U.S. Sen. Bob Menendez (D-NJ) pulled a Hillary Clinton-in-New-Hampshire today, as he choked back tears while discussing gender equality in a daycare center for which he supplied federal funding.

Few would describe as intensely competitive his race with state Sen. Joe Kyrillos (R-13) so far, but the absence of a visibly strong campaign from President Barack Obama – at least to date – has forced Menendez to shoulder his own statewide machinery.

“The President’s numbers are good in New Jersey, and the President is going to be in the mainstream of New Jersey voters,” Menendez told PolitickerNJ.com. “But I’m running my own race.”

A Hudson County teflon tough guy who usually doesn’t radiate anything but wonkish willingness to debate issues, Menendez’s emotional moment came toward the end of his daycare press conference and just before he led a walking tour down to the Hudson Avenue address where his late seamstress mother raised him.

The incumbent Democratic senator invoked Kyrillos’s name several times as he dismissed his opponent’s recent public radio boast that he would be a candidate for women. As Menendez enumerated the number of times Kyrillos has opposed government funding for women’s healthcare and other initiatives and described his own record by contrast, he became emotional and twice choked back sobs.

The scene surprised allies of the senator’s, who said they knew him going back to his days as mayor of Union City and never saw him come close to crying in public.

“Joe Kyrillos voted six times in three years against women’s healthcare,” Menendez said. “He voted against millions of dollars in family funding. He didn’t choose to cast a vote in favor of paycheck equity. When I had that chance in the U.S. Senate I helped pass the Lilly Ledbetter bill. THere is a fundamental difference between my opponent and me.”

Standing later in front of the tenement building where he grew up at 4607 Hudson, Menendez said when he heard Kyrillos proclaiming himself to be the candidate for women he felt he had to respond and let the voting public know about the record – even if it means advertising his low name ID opponent.

With unemployment at 8.2 percent, Kyrillos has hounded what he sees as Obama’s and Menendez’s failure to kickstart the economy.

“We have had a series of jobs bills but our problem is we have Republicans voting against each and every piece of legislation that would create jobs,” he said.

For their part, the Kyrillos campaign cited the incumbent’s shifting sense of whom to tax. “Consistency matters and Bob Menendez is anything but,” said Kyrillos Campaign Manager Chapin Fey. “First he says we should extend tax cuts for those making up to $1 million.  Then he says it should be only up to those making $350,000.  Most recently, the number was $250,000.  What will it be tomorrow?

“Since we can’t rely on his word, we have to look at what he’s done.  Sadly, his actions don’t match his rhetoric.  In fact, when Bob Menendez could have voted to lower taxes on middle-class families, he didn’t.   During his Senate tenure, he has voted in favor of higher taxes more than 70 times.  It’s just more of the same with Bob Menendez – he says one thing and then votes the other way. We need jobs.  Not political theater and election year pandering.  We need someone who is willing to roll up their sleeves and do the right thing, not just talk about it.”

“The truth is women have been hurt by Bob Menendez’s votes and policies.  In fact, there are 780,000 more women unemployed today than there were three and a half years ago. What does Menendez’s record show: increased debt, reduced jobs and cuts to Medicare. No wonder he wants to draw focus away from that. While Menendez continues to play politics, a ticking time bomb awaits New Jersey families. While he continues to talk and not act, the threat of a massive tax increase that will hurt women and all taxpayers continues to grow. Bob Menendez promised us better, but gave us so much worse.” 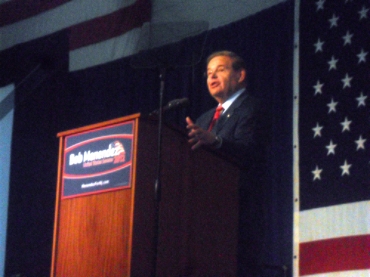