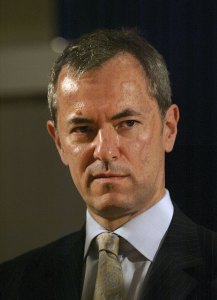 Former Getty Museum director Michael Brand gave an interview to The Art Newspaper‘s Elizabeth Fortescue in which he discusses why he left that position in 2010 with a year still left on his contract. He’s since become director of the Art Gallery NSW in Sydney.

Not surprisingly, Mr. Brand slams the internal structure at the Getty, where the museum director has to report to a paid board president who is also the Getty’s chief executive. He describes the position as “lonely,” and offers a look at his relationship with the CEOs during his tenure.

Just after Brand started at the Getty, Barry Munitz, the president and chief executive of the J. Paul Getty Trust, resigned in the aftermath of a scandal over his lavish expenses. The Getty’s chief executive during the rest of Brand’s stewardship of the museum was the late James Wood, whom Brand describes as uncommunicative and indecisive. “In three years, [Wood] never had one-on-one meetings with me,” Brand says.

Wood shifted control of the museum’s acquisitions budget from Brand’s office to his own, frustrating the museum’s ability to manage its collection, he says.

On the plus side, he lauds the Getty with letting him repatriate objects to Italy and Greece, and he reveals that he held a lunch for embattled curator Marion True (who was charged with antiquities crimes in Italy but never convicted) “to honour her contribution to this great, great museum site.”