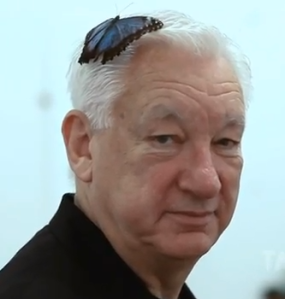 As Mr. Craig-Martin saunters around Mr. Hirst’s current Tate Modern retrospective, he mentally returns to that period, when he noticed something different about this class of students from any of the other classes he’d taught since starting there in 1973-74. “There was a chemistry, very unusual chemistry between them. They were very fond of each other…it was very intimate.”

And while Mr. Craig-Martin thinks of the spot paintings as “the beginning” for Mr. Hirst, the one he thought was “the most important, most extraordinary work that Damien ever did,” was another. Also, check out the live butterfly that lands on Mr. Craig-Martin’s head, like some trompe-l’œil hat by Elsa Schiaparelli. It’s a fun little film.