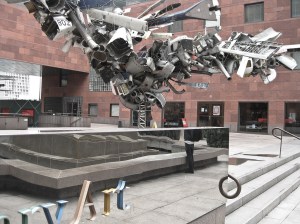 Just when things appeared to have calmed down at the Museum of Contemporary Art, Los Angeles, following the much-debated departure of chief curator Paul Schimmel late last month, four of the museum’s lifetime trustees have penned a letter to the Los Angeles Times that takes issue with the positions staked out by Eli Broad, another lifetime trustee, in a separate letter recently published in the paper.

The four trustees—Lenore S. Greenberg, Betye Burton, Audrey Irmas and Frederick M. Nicholas—open their letter as follows: “Like Eli Broad, we are life trustees of the Museum of Contemporary Art, but we have a different version of the museum’s history and, more important, a different vision of its future.”

While acknowledging that the museum has, in the past, overspent its budget, hurting its financial standing, the letter argues that the “celebrity-driven program that MOCA Director Jeffrey Deitch promotes is not the answer.”

In his letter, published this past weekend, Mr. Broad maintained that, in today’s economic environment, “museums must be fiscally prudent and creative in presenting cost-effective, visually stimulating exhibitions that attract a broad audience.”