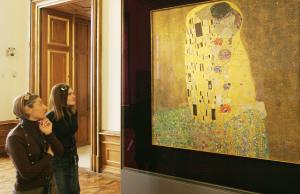 Barbara Kruger and Catherine Opie followed John Baldessari in resigning from the board of MOCA L.A. Here’s their letter. [L.A. Times]

An early fresco by the artist Gustav Klimt, thought to be lost for good, was allegedly found by a man in his garage in Northern Austria, just as Austria is celebrating the painter’s 150th birthday. Experts say the fresco is most likely by Klimt’s brother Ernst. [The Guardian]

Chicago collector Stefan Edlis, who made his money in plastics, talks about his collection. He owns six works by Maurizio Cattelan. He says, ” Is Cattelan a jokester? Is he a fraud? I like asking those questions.” [WSJ]

Shepard Fairey mural is at the heart of a lawsuit. [L.A. Times]

Geoff Dyer on how Google Street View is inspiring new photography. [The Guardian]