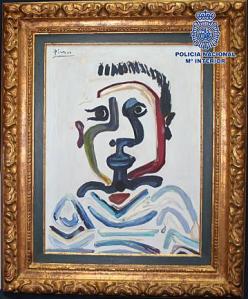 Painting forger tells the Daily Mail not to overlook the little details: “‘I pride myself on my forensic expertise. I started with extensive research…the correct canvas, correct stretchers…framed in good period antique frames.” [Daily Mail]

Christopher Knight on the Paul Schimmel affair: “A great art museum whose board of trustees has a combined net worth far in excess of $21 billion shouldn’t have financial problems. But welcome to MOCA.” [LA Times]

Rachel Whiteread created a frieze for the facade of Whitechapel in London because she couldn’t say no to giving back to the neighborhood that informed her early work. Her move to bedraggled East London was one of many that was a harbinger of change for the ‘hood–she recalls: “I remember calling my mum from a phone box outside,” she says, her voice on the edge of laughter, as it often seems to be. “There was blood all over it. I thought: ‘Oh my God, where have I moved to?'” [Guardian]

A German billionaire to donate his Western American art collection to the Tacoma Art Museum, which according to museum director Stephanie Stebich, will place the museum “among the top 12 museums that have this breadth and quality (of Western American art).” [Seattle Times]

Myles Connor, 69, who documented his museum thefts in “The Art of the Heist,” was arrested for robbing two women outside of a convenience store. [Boston Globe]

Michael Kimmelman talks about the recent architecture of Bogotá. [NYT]

The Wall Street Journal checks in on the dire situation at the Museum of Biblical Art. [WSJ]