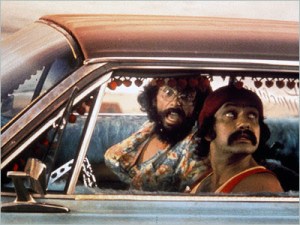 Cheech Marin, of Cheech and Chong infamy, is being honored this weekend as patron of the year at ArtHamptons International Art Fair. Mr. Marin has the largest collection of Chicano art in the world. Ralph Gardner meets up with him at the studio of Peter Max. [WSJ]

An interview with James Ramsey, who is building a subterranean park beneath an abandoned trolley station on the LES that opens in September. [Time]

On the recreation of Monet’s garden at the New York Botanical Garden. [NYT]

The Singapore Airport is now home to the world’s largest kinetic artwork, which was designed by a team that included Benjamin Maus and artist Jussi Angesleva. [The Atlantic]

Google has mapped more than 2.7 million square feet of the Smithsonian. [ArtDaily]

Stonehenge has been turned into a “fire garden” to mark the 2012 London Olympics. [Xinhua]