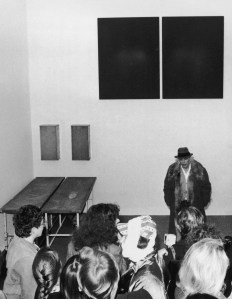 Employees at the National Gallery in London may go on strike on the first day of the Olympics. [Art Review]

R. Crumb champions technique as a retrospective opens in Paris: “When you look at something like Joseph Beuys, it’s so thin,” Mr. Crumb is quoted as saying by the French magazine Art Press. “It’s just an abstract idea. It’s not about any skill. There’s a kind of suspicion about skill in the fine arts world.” [Bloomberg]

Speaking of Beuys, his workshop is going on view at a show in Kleve, Germany. [AMA]

What’s it like down in the Tate Modern’s new Tanks extension? Great accoustics! [The Art Newspaper]

The artist Barton Lidice Benes’ apartment is sent wholesale to the North Dakota Museum of Art in Grand Forks for an exhibition of his there. [NYT]

Louis Vuitton is making made-to-order leather for select customers. Said the firm’s CEO: “It’s the same with art. If you are interested in art, the ultimate is to commission an artist rather than buy a piece that is already done.” [Reuters]

An ear trumpet headband and gas-powered prosthetic arms are among the items in a new show about human-enhancing devices at London’s Wellcome Collection. [The Guardian]

Observer art critic Michael Wilson visits the Parrish Art Museum’s Midsummer Party, and sees “a lot of über-preppy affectations of the fuchsia socks-and-braces variety that would be a distinctly risky choice on Main Street, USA (or anywhere).” [Artforum]

A look at Swiss free ports, where collectors store their treasures. [Swissinfo]