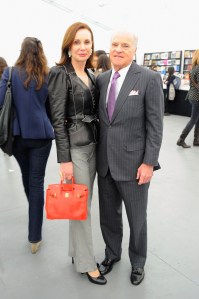 Holland Cotter reviews the Yayoi Kusama show at the Whitney: “In the New York City of the mid-’60s she and her art were everywhere. Newspapers clamored for photographs of her wearing dots, painting dots, mingling with the dot-covered nude dancers in street performances that were part protest, part circus.” [NYT]

The Getty talks about a sequel to the popular Pacific Standard Time. [The Art Newspaper]

Christopher Bedford, the chief curator of the Wexner Center for the Arts at Ohio State University in Columbus has been named the new director of the Rose Art Museum at Brandeis University. [NYT]

This year’s Frederick Kiesler Prize for Architecture and the Arts, which is alternately awarded by the Austrian and Viennese governments, goes to Andrea Zittel. [ArtDaily]

Kimberley Bush Tomio has stepped down as the director of the Tyler Museum of Art in Tyler, Texas, to become director of museum services at the Asian Art Museum in San Francisco. [KLTV]

Mike Boehm has more on John Baldessari’s resignation from the board of the Museum of Contemporary Art, Los Angeles. [Los Angeles Times]

Inspired by the news that Leon Black purchased the $120 million Munch pastel, The Wall Street Journal takes a look at the art holdings of other private equity titans. [WSJ]

Skye Sherwin takes a look at the work of British filmmaker Jennet Thomas. [The Guardian]