At the beginning of 2012, when the phenomenon of Jeremy Lin known to many as “Linsanity” hit New York City seemingly out of nowhere, it took the stock price of Madison Square Garden Entertainment (which owns the New York Knicks) with it: Up, up, and away. Now that Lin is leaving the Knicks, what’s happening to MSG chairman James Dolan and Co.’s stock price?

Let’s flash back quickly to February, when Jeremy Lin started making notable appearances on the court for the Knicks: For a few days, the stock experienced slow, steady gains. And then, as Lin started performing, the rest of the world —(and the markets) took notice: $MSG stock began to experience spikes and swells, and continued to rally. Despite Lin’s injury in March that took him off the court for the rest of the season, there was little speculation that he’d be traded. In May, after the Knicks were ousted from the playoffs, talk of Lin’s contract began with a dispute over the nature of his free agency, and whether or not the Knicks could exceed the salary cap in attempting to resign him. In recent weeks, it was made clear that Lin would be talking to other teams. And in recent days, it was made clear that Lin was taking some of these talks seriously.

But at the end of June, the question of how much the Knicks could pay Lin was resolved in their favor. For a moment, things looked up.

Lin stayed out of the Olympics to deal with his contract negotiation (and not run the risk of injuring himself further, so he could still court offers). Lin also signed a term sheet with Houston that the Knicks would have to begrudgingly match.

Which is when this happened: “I think the gain in MSG shares earlier in the year as well as the Jason Kidd incident/potential Lin loss that hit the shares yesterday and today has already efficiently been reflected in the stock movement,” said Miller Tabak analyst David Joyce.

What’s perceived by many to be the legendary mismanagement of the New York Knicks by ownership (and is generally reflected in their winning percentage from the last few seasons) proved a decent map to see where this was headed: Regardless of Lin’s ability as a player, he is a global fan phenomenon—for nerds, for Christians, for Asian-Americans—especially in New York City. Lin piqued the interest of those who had no interest in basketball prior to his rise. Lin was essentially responsible for ending one of the most bitter cable carrier disputes in recent history.

And yet: An investment in a consistent, larger fanbase, let alone the potential for Lin’s play on the court to elevate the team notwithstanding (which, to an extent, was arguably proven) didn’t prove enough for the brass at The Garden to resign Lin. Whether or not it was a good play or not has yet to be seen; given the track record at hand for the team, however, the very least that could be said about the move was that it’s not unexpected. Not necessarily because Jeremy Lin wants to make as much money as he possibly can so much as that the Knicks seem to do whatever will further alienate fans and spectators as a matter of course.

If the Knicks themselves asked you to look at [Jeremy Lin’s numbers, comparable to his inflated asking price], you might wonder where the catch was. The Tappan Zee Bridge couldn’t span that credibility gap. And somewhere in the murky waters below rests the Knicks’ benefit of the doubt. Even if they happen to be right. 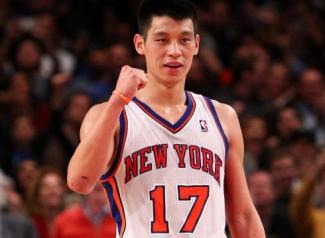