One of the must-see exhibitions of the summer is now on view at the Museum of Biblical Art, a young, jewel-box of an institution that few New Yorkers know about, let alone visit, and that is currently facing financial and organizational challenges.

With only seven works, the exhibition is stunning in its simplicity and shows off some of MOBIA’s strengths—displaying rarely seen art, and in illuminating new contexts. It is titled after its centerpiece, “The Adoration of the Magi by Bartolo di Fredi,” an over-six-foot-high 14th-century altarpiece that has been temporarily reconstructed at the Upper West Side museum through Sept. 9. A difficult-to-obtain loan from Siena, Italy, that came about thanks in part to a tale of alleged international antiquities smuggling, it is finally reunited, after hundreds of years, with two of the small predella pieces that originally ran along its bottom. “It’s Bartolo’s masterpiece,” said Bruce Boucher, the director of the University of Virginia Art Museum, which first hosted the show and owns one of the predella panels. The other is loaned from the Lindenau-Museum in Altenburg, Germany.

MOBIA has added two more altarpieces by Bartolo that were not in the Virginia show by borrowing them from the Metropolitan Museum of Art—there’s an Adoration of the Shepherds from the Cloisters uptown, which the Met cleaned for this show (“We have always had a good relationship with them,” said Patricia Pongracz, MOBIA’S acting director and director of curatorial affairs), and an Adoration of the Magi from the Met’s Lehman Collection. It’s the first time all three Bartolo “Adorations” have been shown together, Mr. Boucher added.

Even though this show is only the latest of several small spectaculars, MOBIA, despite its substantial credibility among academics, has yet to make it onto the general public’s radar screen, Ms. Pongracz said. Since opening in 2005, it has attracted a steady trickle of only 15,000 to 17,000 visitors a year.

One of those visitors in 2011 was Mr. Boucher, who was searching for a major-city museum partner to satisfy a requirement for landing the Siena loan.

Requesting the altarpiece from Siena was “audacious,” Mr. Boucher said, but it became possible because of the unusual role his museum played in a tale of international antiquities intrigue.

Some years earlier, Virginia’s professor emeritus of classical archaeology, Malcom Bell III—who has been director or co-director of U.S. excavations at Morgantina in Sicily since 1980 and is a forceful advocate of repatriation—“had known about two archaic Greek sculptures in New York that had [allegedly] been illegally exported” after being looted from the Morgantina site, Mr. Boucher explained. “Shortly before the Italian government was to file a claim [for the works], the owner agreed to hand them over to the Virginia museum, which would keep them for five years and then send them back to Italy.”

The two works had been bought by a famous American collector, for what sources say was an estimated $1 million, in 1980 from British dealer Robin Symes, who allegedly traded in looted antiquities. In 1988 they turned up at the Getty Museum in Los Angeles as anonymous loans.

But after Italy claimed the works were looted, the Getty promptly sent them back to the donor, and they weren’t seen again until they popped up at the University of Virginia Art Museum in 2002. The owner has been identified by The New York Times as Maurice Tempelsman, a major art collector better known as Jacqueline Kennedy Onassis’s last companion. (Mr. Tempelsman, who has never been accused of wrongdoing with respect to the works, did not respond to telephone and e-mail inquiries.)

In recognition of the university’s role as an intermediary in returning the sculpture to the nation, the Italian Culture Ministry entered into a written agreement under which Italy agreed to cooperate in lending it art. “Without the agreement, it would have been hard to get the loan,” Mr. Boucher said.

However, Italy would lend the altarpiece to the Virginia museum only if it was also shown in a major metropolitan setting and shown in 2012. “We approached [large] museums, but they were booked,” Mr. Boucher said. “I had just seen ‘Passion in Venice,’ [a well-received 2011 show at MOBIA that had international loans] and realized they are a major museum and have a track record.” MOBIA became “a critical component” in making the Siena loan happen, he said.

The Siena altarpiece demonstrates an important aspect of narrative religious imagery—telling a story to people who do not know how to read. It depicts four narratives of the magi’s journey in the upper part of the painting, moving from right to left. Siena itself is depicted as the New Jerusalem in these scenes—at the upper left is the city’s famous cathedral and bell tower, and the medieval cityscape is surrounded by the fortified walls of a medieval Italian hill town.

But as splendid and innovative as the Siena altarpiece is, it is not the most gripping work in the exhibition. That honor goes to a small Madonna and Child with Saints made for private devotion and attributed to another 14th-century Sienese artist, Naddo Ceccarelli, about whom very little is known. (“It’s a firm attribution,” Ms. Pongracz emphasized.) Only two works by Ceccarelli are signed, and they are highly valued. When a British seller offered one at Christie’s London in 2005, it went for £1.24 million (about $2.15 million at the time). The U.K. at first refused to grant an export license for the auctioned piece while it attempted, ultimately unsuccessfully, to raise funds to keep it as a national treasure. What makes the small Ceccarelli altarpiece at MOBIA extraordinary—it measures less than two feet on either side—are its humanistic, lifelike modeling—especially in the faces—and the sensitive, detailed rendering that draws the visitor in for intimate viewing.

Another stunner is the Crucifixion in the shape of a cross more than six feet high by Francesco di Vannuccio. It shows a suffering Christ with toes and clawlike hands so tensed that they are painful to look at.

This variety “demonstrates what a hotbed of artistic work was going on in Siena in the second half of the 14th century,” said Ms. Pongracz, adding that Sienese art from this period was previously considered primitive and has only recently come to be appreciated.

But names like Bartolo di Fredi are unlikely to bring in a large number of visitors, she admitted. “When you have a big name like Dürer, you draw more,” she said, referring to MOBIA’s 2008 show of works by the masterful German artist.

She said that she believes another obstacle to bringing in the general public is the fact that the museum doesn’t have a permanent collection that would give visitors a predictable experience. “Everything we do is a risk,” she said.

The museum is also about to be faced with having to raise substantial sums in order to cover its operating expenses. Since its founding, MOBIA has been dependent on the American Bible Society for cash grants. In fiscal year 2011, the ABS contributed $1.2 million of the museum’s $3 million budget and provided free office and exhibition space in its building at Broadway and West 61st Street, estimated to be worth $500,000 in MOBIA’s 2010 financial report. But as part of a plan agreed to by the museum and the society, those guaranteed cash grants are currently being scaled back and will cease altogether in July 2015.

Ms. Pongracz said that although the museum is not being asked to leave, it is looking for a new space—one with more galleries and a freight elevator. At the moment, she said, “I worry first about getting work through the doors, and then worry about getting it up the stairs” because the public elevator isn’t large enough.

All of this will take money. When MOBIA’s founding director, Ena Heller, left her post in June, she told USA Today that one reason for her departure was that she did not want to do any more fundraising.  (The search for a new director will kick off in earnest after Labor Day, Ms. Pongracz said.)

At the moment, the museum has no endowment, as is the case with many smaller institutions around the country. It raises money for each exhibition individually and has a staff of just nine full-time employees and a few part-timers.

“It’s a heavy lift in front of us,” Ms. Pongracz said, one that entails establishing financial independence, finding a new space and building an endowment. But it has already solved one issue, erasing a $500,000 debt. Its fiscal-year 2011 ledger “shows money in the bank.”

With backers like Howard and Roberta Ahmanson, evangelicals who contributed millions of dollars in support of California’s Proposition 8 (which outlawed gay marriage in that state) and sponsored the Caravaggio exhibition in London in 2005, another money spigot may be at the ready. The two are MOBIA’s largest private donors—according to The Chronicle of Philanthropy they have given already $1.2 million this year—and Ms. Ahmanson, who sits on the Collectors Committee of the National Gallery, chairs MOBIA’s board of trustees. 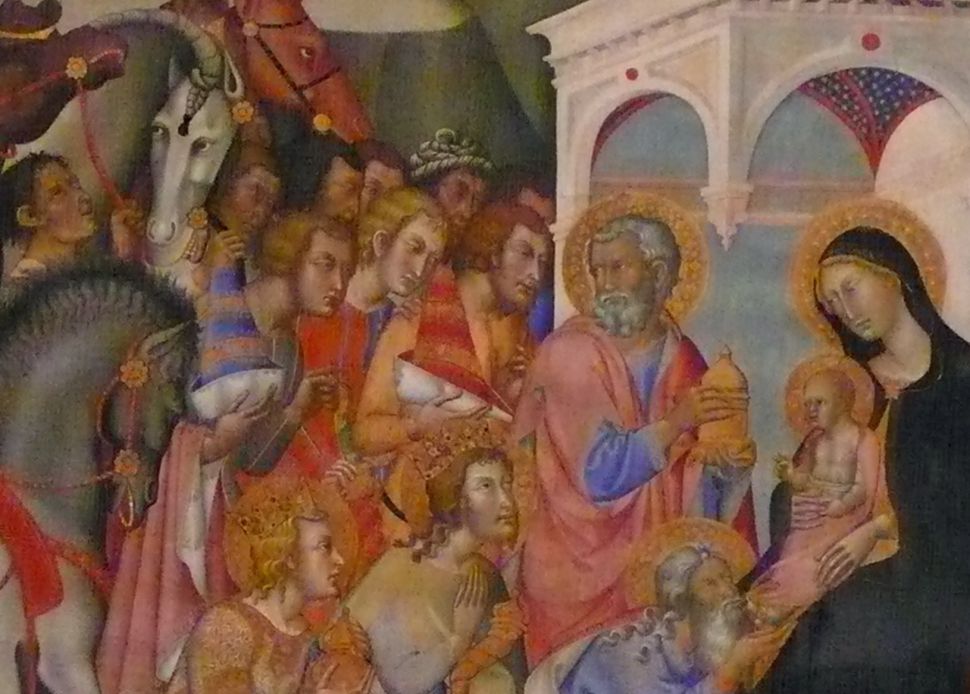