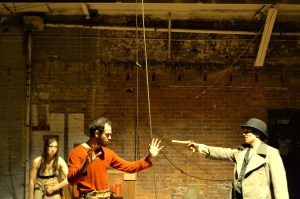 The ninth annual Shanghai Biennale, which runs Oct. 2, 2012 to March 31, 2013, features city’s rather than the usual country pavilions. As part of the biennale, the Museum of Contemporary Art Detroit has been selected to curate the Detroit pavilion.

The exhibition this year includes four section, “Resources,” “Revisit,” “Reform” and “Republic.” Included in the Detroit pavilion will be “Voice of the City,” a contemporary Vaudeville act produced by theater ensemble the Hinterlands. The show will focus on performances and documentation of Jit, a form of underground dance that originated in Detroit.

In other news, before heading off to Shanghai, on Sept. 7 MoCAD will open the exhibition “Vision in a Cornfield,” which features members of Destroy All Monsters (which started as a punk band featuring the late Mike Kelley and Carey Loren), as well as artist collectives Ogun and Apetechnology. The show is inspired by a supposed encounter Kelley and Mr. Loren had about a decade ago with a low-rider car blasting music in a cornfield.