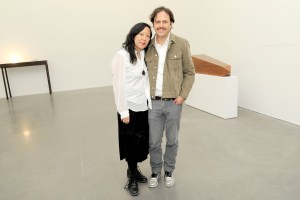 Eungie Joo, who is currently director and curator of education and public programs at the New Museum (where her position is named after Keith Haring), has been tapped to be director of art and cultural programs at the contemporary art Xanadu of Inhotim, in rural Brazil, where industrialist Bernardo Paz shows a huge trove of the works he owns and regularly commissions major site-specific pieces. The New York Times shared the news last night.

Before starting at the New Museum, Ms. Joo was director and curator at Redcat in Los Angeles from 2003 to 2007. She served as an adviser on the 2008 Carnegie International, and received the Walter Hopps Award for Curatorial Achievement in 2006. At the New Museum, she organized the 2011 triennial, “The Ungovernanbles,” with curatorial assistant Ryan Inouye.

Back in March, The New York Times offered a glimpse of Imhotim, which is located in the “mining-scarred hills far from Brazil’s collecting scenes in São Paulo and Rio de Janeiro.” (It’s about 200 miles northwest of Rio.) Here’s a bit from that piece:

A whiff of megalomania seems to emanate from Inhotim’s eucalyptus forests, where Mr. Paz has perched more than 500 works by foreign and Brazilian artists. His botanical garden contains more than 1,400 species of palm trees. He glows when speaking of Inhotim’s rare and otherworldly plants, like the titun arum from Sumatra, called the “corpse flower” because of its hideous stench.

“This is a project to last 1,000 years,” Mr. Paz said of Inhotim during a rare interview, a Dunhill cigarette dangling from his lips.