New York Times mediacreature David Carr and Toby Turtle doppelganger A.O. Scott recently taped another video in a series not titled “Old Timesmen Telling Jokes,” which is not set to premiere off-Broadway this fall. Previously, these two geriatric culture anthropologists discovered Brooklyn, The Brand, the phenomenon of dead pop stars, and pissed off celebrities on Twitter. Now, they delve into the “guilty pleasures” of the New York Times.

“For a high-minded bunch, they sure like a lot of crap,” notes Carr of the Times staff, as he eats out of a bag of Pirate’s Booty next to an empty bottle of Diet Coke.Of course, we all know that the “guilty pleasures” of those who work at the New York Times denote a sense of “guilt” over the plain-old “pleasures” of most normal folk in the Western Hemisphere: A sense of guilt allows us to feel above something while engaging it with an ostensible sense of detachment, which, let’s face it, is never the case. A.O. Scott notes that some things are “inherently disreputable.” Like smoking? Try Carly Rae Jepsen, comics, video games, and so on.

And that David Carr loves:

Poor Dave Itzkoff probably put his head through drywall after watching this. Also, this feels somewhat incomplete without the participation of Al Siegal (potential answer: “#2 Pencils”).

We’ve saved you the work of watching it, but it actually is a fun little video, if anything, because you get to see a decent cross-section of the (old) people who make the Times. Watch here. 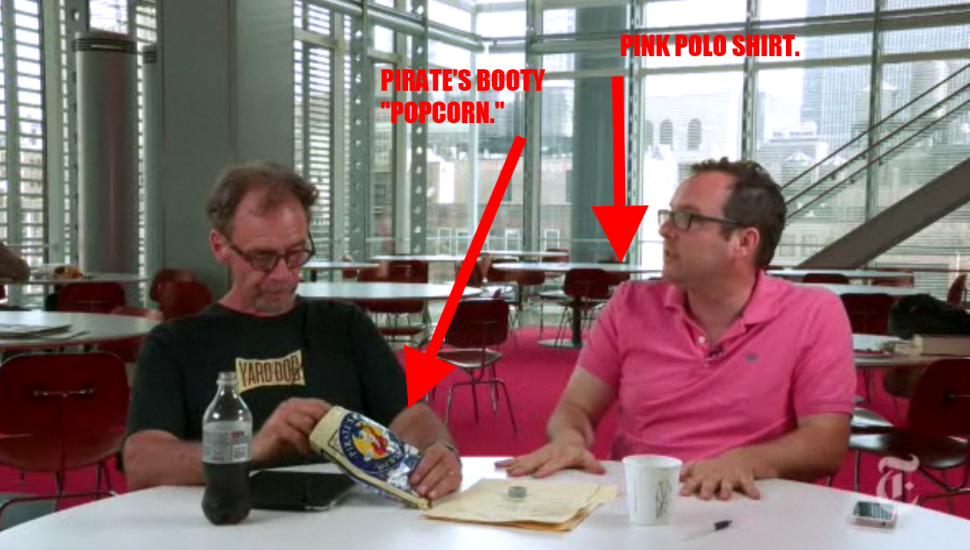