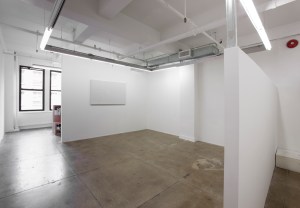 Save for a single painting, Balice Hertling & Lewis’s small fourth-floor space in Hell’s Kitchen was pretty much empty when we arrived at 7 p.m. sharp on the last Thursday of June for the opening of Nicolas Guagnini’s “Sequence 4: Seven.” Perhaps everyone was at the Miguel Abreu opening of Mr. Guagnini’s “Sequence 4: Seven,” which started an hour earlier. The two galleries have teamed up to present the show, displaying just one of the seven paintings in the series every week for four weeks.

The paintings are near-monochromic grey reproductions of a French postcard bearing the scrawled epigraph “Ne Travaillez Jamais” (“Never Work”), itself a reproduction of the Paris wall bearing that epigraph, which was allegedly graffitied in 1953 by Guy Debord, the French thinker who helped found the Situationist International.

“The object is the entry point to the game,” dealer David Lewis told us. Mr. Guagnini, by that logic, is the gamer, asking viewers to continually revisit two galleries seven times total over the course of two weeks to see seven almost identical works. If certain elements of the game seem capricious (neither gallery has yet established how profits will be split), it is also carefully calculated.

By the time Mr. Guagnini arrived, a crowd had gathered in the tiny space. He told Mr. Lewis and the gallery assistant that his painting did not appear to be level. The pair protested that the walls and floor in the space are crooked. And so a level was produced. It sided with the gallery: the painting was indeed technically level. Of course, the architecture of a space can make it appear otherwise.

When we asked Mr. Guagnini which he would prefer, that the work be truly level, or look level, he replied, without missing a beat, “Like Althusser, we live in signs.”