Tickets for concerts or sporting events being scalped for absurd markups of their face value is nothing new to New Yorkers. So it was only a matter of time before you’d see the same thing happen to summer blockbusters.

You can probably imagine that The Dark Knight Rises is going to be a hot movie ticket this weekend, and The Dark Knight Rises in IMAX 3D an even hotter ticket. But as many a movie-goer in this city knows, despite advertisements to the contrary, there’s only one, true mammoth IMAX-sized screen worth paying the extra few bucks to get into: The Lincoln Plaza AMC, on 66th and Broadway. Its Dark Knight screenings are already sold out for opening weekend. That doesn’t mean you can’t get in.

But it’ll cost you. Via The Price Hike, one Craigslister with tickets for this weekend explains:

I have four tickets to the only real IMAX IN THE CITY. The IMAX at Lincoln Center is sold out until Tuesday as it’s the real deal within the five boroughs. These are for the 6:15pm show on the opening Friday night. I want $85 ticket or $$350 for all four.

Correct he is: The shows are sold out until Tuesday, that part’s true. But the real deal? No. The “real deal” is paying face value for these tickets, and waiting until you can actually see the film. Or not dignifying this guy with his offer, which Price Hike blogger (and Bloomberg food critic!) Ryan Sutton notes as a 228% markup. If you so happen to take this guy up on his offer, and have also read this post, please interview him: His name, his profession, and why he must profit at the hands of desperate fanboys or people who just weren’t around to buy the tickets when they went on sale, and if he believes in the concept of karma, and how he feels about the rage those like this writer feel when they see things like this, a feeling which, this writer truly believes, he can not be alone in having. 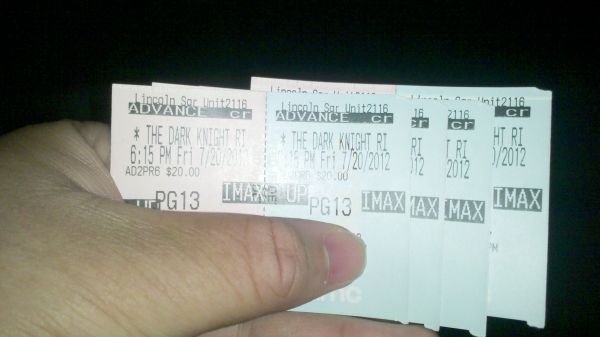