A scene from the Obama campaign’s new ad. (Photo: YouTube)

The Obama campaign continued their attack on Mitt Romney’s offshore assets and refusal to release more of his tax returns with a new ad this morning entitled “Makes You Wonder.” In the ad, a narrator points to the Vanity Fair investigation of Mr. Romney’s finances and suggests his use of “tax havens,” “offshore accounts” and “carried interest” and his low overall tax rate indicate he may not have “paid any taxes at all” outside of the one year for which he did release returns, 2010.

“Mitt Romney has used every trick in the book. Romney admits that over the last two years he’s paid less than 15% in taxes on $43 million in income. Makes you wonder if some years he paid any taxes at all,” the narrator says as text flashes across the screen showing the years 2005 through 2009 followed by question marks.

As a news clip of Mr. Romney saying he won’t release more information than his 2010 return and his estimated liability for last year plays, the narrator suggests the mystery of Mr. Romney’s monies can’t be solved unless he discloses his returns.

“We don’t know because Romney has released just one full year of his tax returns and won’t release anything before 2010,” the narrator says. “What is Mitt Romney hiding?”

The Romney campaign released an attack of their own this morning, a statement blaming the layoffs that occurred after the energy company Solyndra went bankrupt on “political payoffs” from the Obama administration. The statement included a fact sheet showing ties between Solyndra, which received a $535 million federal loan guarantee from the Department of Energy prior to going under, and Obama campaign donors.

“Life in the Obama economy is difficult for millions of struggling middle-class Americans–-but President Obama didn’t make it any easier for more than a thousand workers at Solyndra. While the President’s political allies reaped the benefits of half a billion dollars in taxpayer funds, American workers lost everything. Middle-class families deserve better from their president,” Romney campaign spokeswoman Andrea Saul said in the Solyndra statement.

Neither of these attacks are entirely new. The Obama campaign has spent weeks hitting Mr. Romney on his finances and Team Romney has done a prior Solyndra blitz. For now, these two campaigns seem intent on relentlessly digging into each other’s personal histories rather than engaging in policy discussion. Perhaps that will change as the election approaches and the candidates meet for the presidential debates. 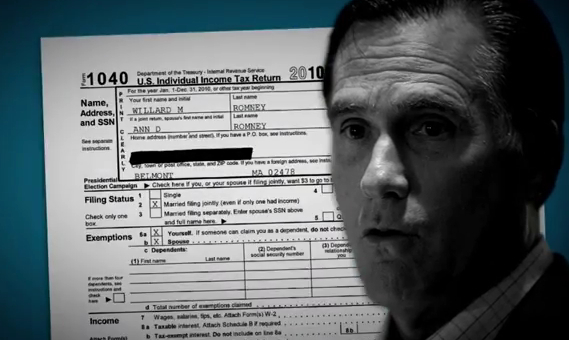