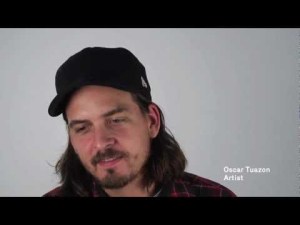 Oscar Tuazon will unveil three new public sculptures at Brooklyn Bridge Park, which will be on view from July 19, 2012, to April 26, 2013.

According to a press release:

These hybrid sculptures incorporate both natural materials and industrial building techniques–local trees and cement casting are at the core of each work–and explore the idea of architecture, labor, and reinvention. In one work, a tall tree trunk is supported with a minimalist steel triangle and conceals a spring from which will flow. Formed by a ten-foot square, cast cement cube with a tall tree embedded at its central axis, the second work functions both as an icon and a passageway along the pier.

The show, called “People,” was commissioned by Public Art Fund.