On the heels of anti-gay statements he made, the actor is scheduled to be in Ocean Grove this weekend to talk about his take on traditional values. Incoming, he rejected a plea by a member of Garden State Equality’s Youth Caucus who objects to Cameron’s past denunciations of gay and lesbian lifestyles.

“These courageous young people are heartbroken by Mr. Cameron’s response, and so am I,” Pallone wrote in a letter to Cameron’s manager. “As a Member of Congress, I have been disturbed by Mr. Cameron’s statements regarding marriage equality, but I am confounded by his reaction to a teen who reached out to him seeking a meaningful conversation.”

The teen in question is Corey Bernstein.

“He usually flies in the day of the event and after the event is actually traveling to the next one,” Cameron manager Mark Craig wrote to Bernstein in response to the young man’s query for an interview with the actor.

“Because of this intense schedule, there is not time to set up extra meetings like you are suggesting,” the manager added. “That being said I would normally just write a simple reply, ‘Thanks for your invitation, however Kirk’s schedule will not permit,’ but because you have taken some time to share some of your feelings, Kirk asked me to personally thank you on his behalf for your kind invitation and is very sorry he can not attend because of the schedule that weekend.  I also want to thank you for taking the time to write and share your heart in your letter.  For this reason, I want to share this thought with you, from someone who sees and works with Kirk almost every day of the year – I promise you his goal is not one of trying to hurt people in any way, in fact it is just the opposite. He has a concern for their well being – not only now, but eternally.  He goes out to share a positive message through events like this weekend and I assure you he will only be presenting a positive/inspiring message.”

“I read the letter Corey wrote you, describing how he and other bullied LGBT teens were devastated by Mr. Cameron’s statements that being LGBT is ‘unnatural,’ ‘detrimental’ and ‘destructive to our civilization,'” the congressman wrote to Craig. “These statements and others made by Mr. Cameron leave little doubt that he believes LGBT people cannot find the happiness in their marriages that non-LGBT people find in theirs.

“The tenor of Mr. Cameron’s words is astonishingly hurtful to LGBT youth struggling with their self-esteem in a world where they and their LGBT peers are often the victims of merciless bullying,” wrote Pallone. “I believe your response to Corey only compounds this problem.  You told Corey to listen to Mr. Cameron’s interviews and comments online, when in fact those comments were what prompted Corey, on behalf of himself and the other bullied LGBT teens at Garden State Equality, to write to Mr. Cameron in the first place.  I find it remarkably insensitive for Mr. Cameron to suggest that these teens, once again, expose themselves to the words that so deeply hurt them upon their first encounter.”

The Democratic congressman suggested that Cameron remedy the problem by meeting with the youth who reached out to him.

“Corey made clear that he and the other bullied LGBT teens would appreciate the opportunity to meet with Mr. Cameron just prior to or immediately after either of his two appearances in Ocean Grove this weekend, even if for only a few minutes,” Pallone wrote to Craig.   “As for Garden State Equality’s Youth Caucus luncheon this Saturday in Ocean Grove, which you said Mr. Cameron could not attend due to scheduling conflicts, I will now be there, and I am honored to do so.  But again, that is no substitute for the bullied teens meeting the person whose comments they found so painful.  I appeal to Mr. Cameron to meet with these young people when he is in town.” 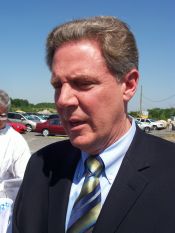