Penn State has a statue of Joe Paterno, the longtime coach of their football program whose legacy was recently marred when assistant coach Jerry Sandusky was convicted on several counts of sexually abusing children. A recent internal investigation revealed knowledge of Sandusky’s crimes and efforts to cover them up, including the extent of the knowledge of senior officials like Paterno.

The internet is amazing because on it you can very easily find opinions you might not think would existed, like those objecting to the statue’s removal.

Here are a sampling of them (though it’s worth noting that the Re-Tweets of other people’s Tweets may not be endorsements of those opinions so much as efforts to show people that they exist): Of note: Nobody seems to have objected to the removal of Joe Paterno’s name from a child care center on the Nike campus. Maybe we’re just not looking in the right places, though. 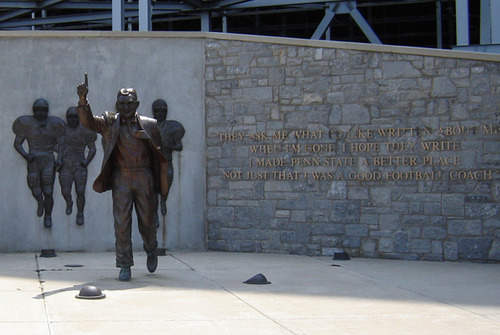