TRENTON –  New Jersey respondents to a new Quinnipiac poll believe Gov. Chris Christie is more of a leader than a bully, but they think he would be a bad fit as vice president, and contrary to Christie’s call for tax cuts now most believe it would be better to wait and see whether revenues will increase first.

Those are the results of the latest Quinnipiac poll issued today.

The poll, issued on a day when Christie is on a three-state Southern swing on behalf of presidential contender Mitt Romney, shows that most respondents believe Christie is not the bully his opponents claim.

Voters say  50-45 percent that Christie is more of a leader than a bully, according to the poll released today.  That compares to a  54–39 percent vote for leader on April 11.

However, when asked to think of a word that describes Christie, with no choices offered, 185 voters picked the word “bully.’’

The other words chosen, in descending order:

“Gov. Christopher Christie’s squabble on the Seaside boardwalk – shades of Snooki! –  underlined his pugnacious ‘Jersey Guy’ image with some voters, who volunteered that he’s a bully.  But most of his fellow New Jerseyans call him a leader,” said Maurice Carroll, director of the Quinnipiac University Polling Institute.

In line with that, voters approve 54–39 percent of the job Christie is doing as governor, unchanged from a poll May 16.

New Jersey voters say 53–40 percent that Christie would be a bad choice as the vice presidential candidate.

On the issue of cutting taxes, respondents said 49-43 percent that it would be better to wait and see if state revenues improve to support a tax reduction.

Despite the fact respondents side with the Democrats’ position of waiting for a tax cut, they generally disapprove 53-27 percent with the way the Legislature is handling the state budget.

“Gov. Christie’s special legislative session provided some early-summer noise, but the result is more voters side with the Democrats’ wait-and-see position instead of Christie’s demand for a vote on tax relief now,” Carroll said in a release.

The poll was conducted from July 9 – 15. Quinnipiac surveyed 1,623 registered voters with a margin of error of +/- 2.4 percentage points.  Live interviewers called land lines and cell phones. 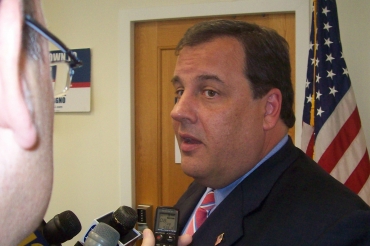