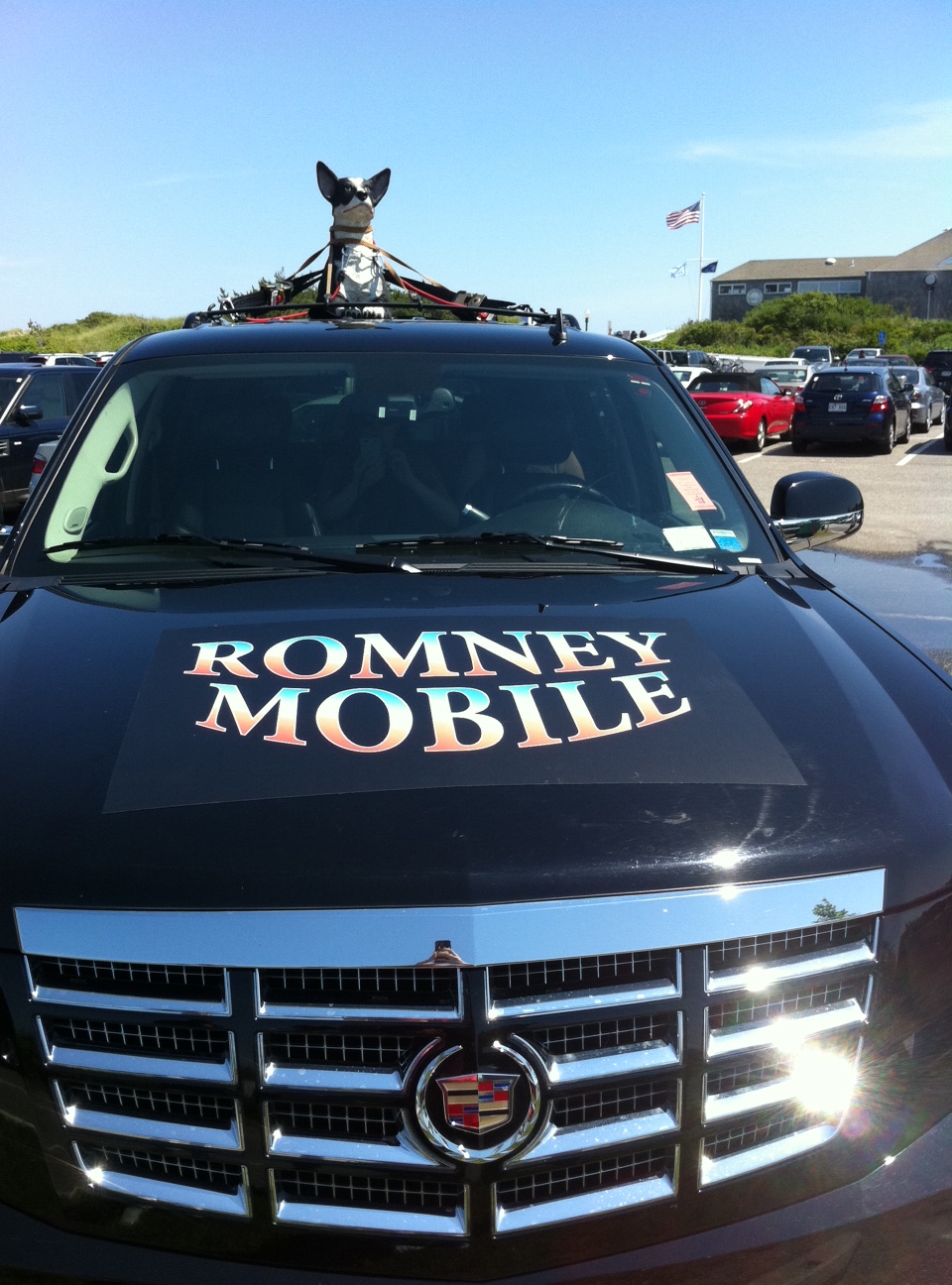 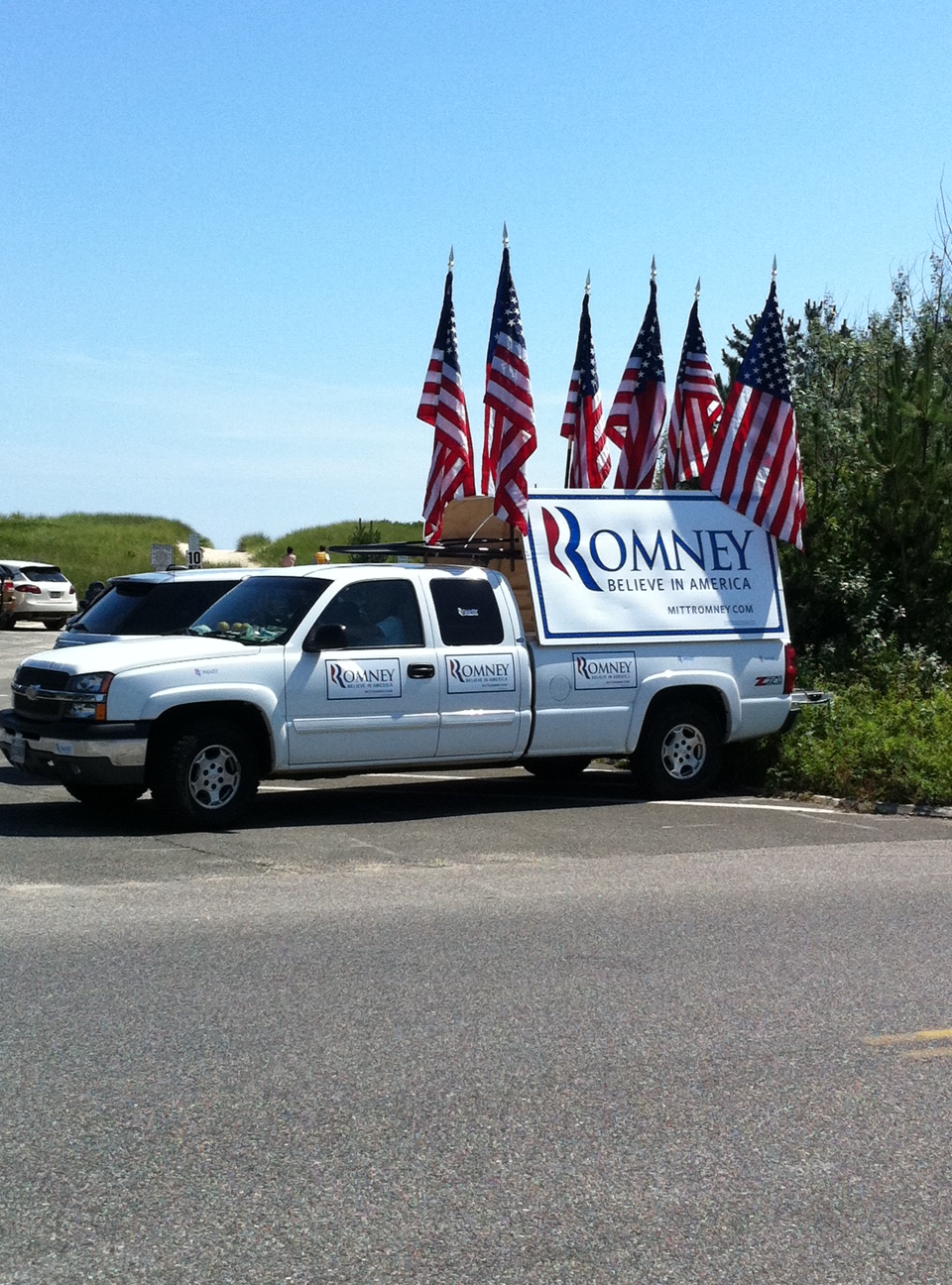 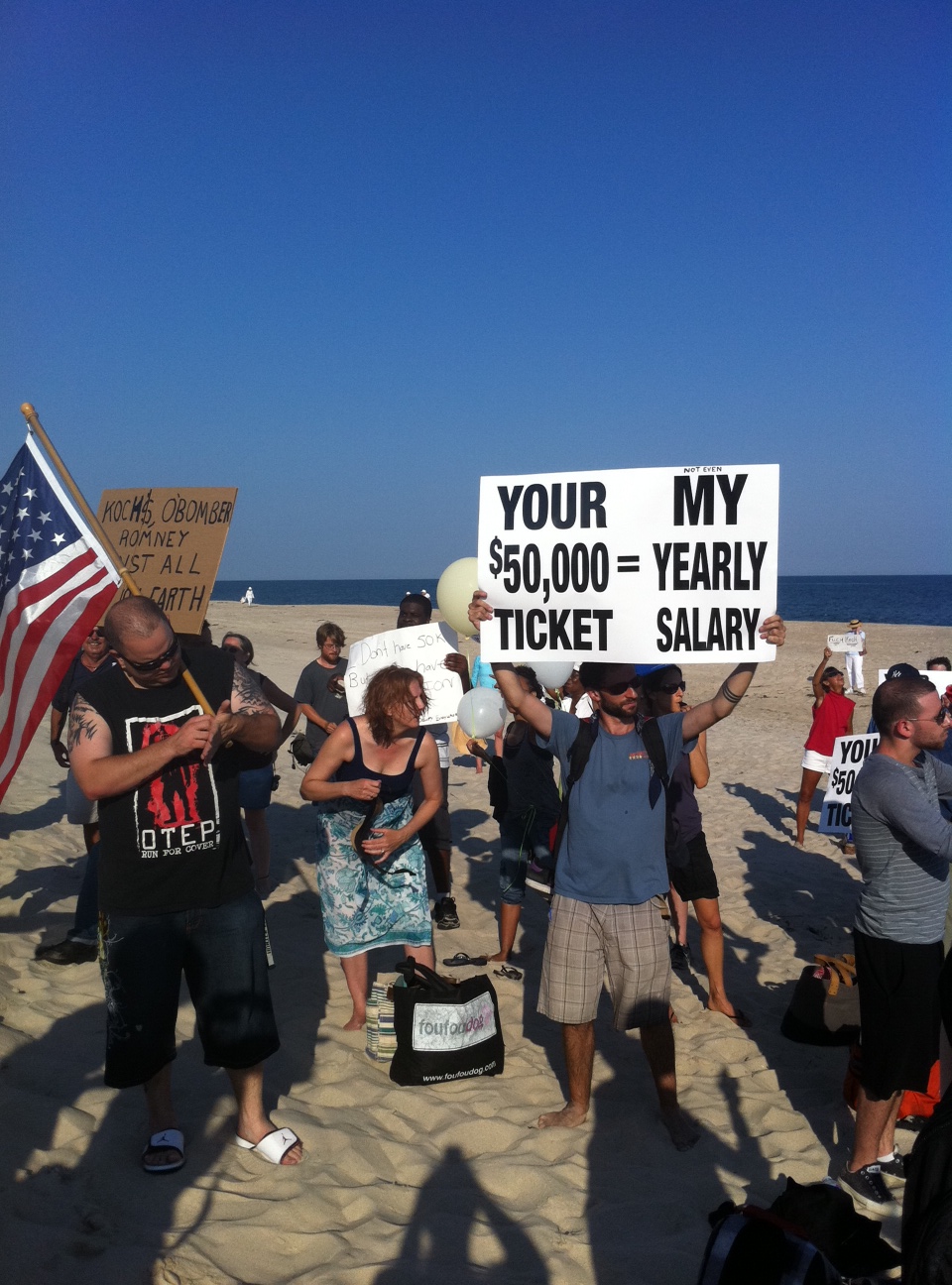 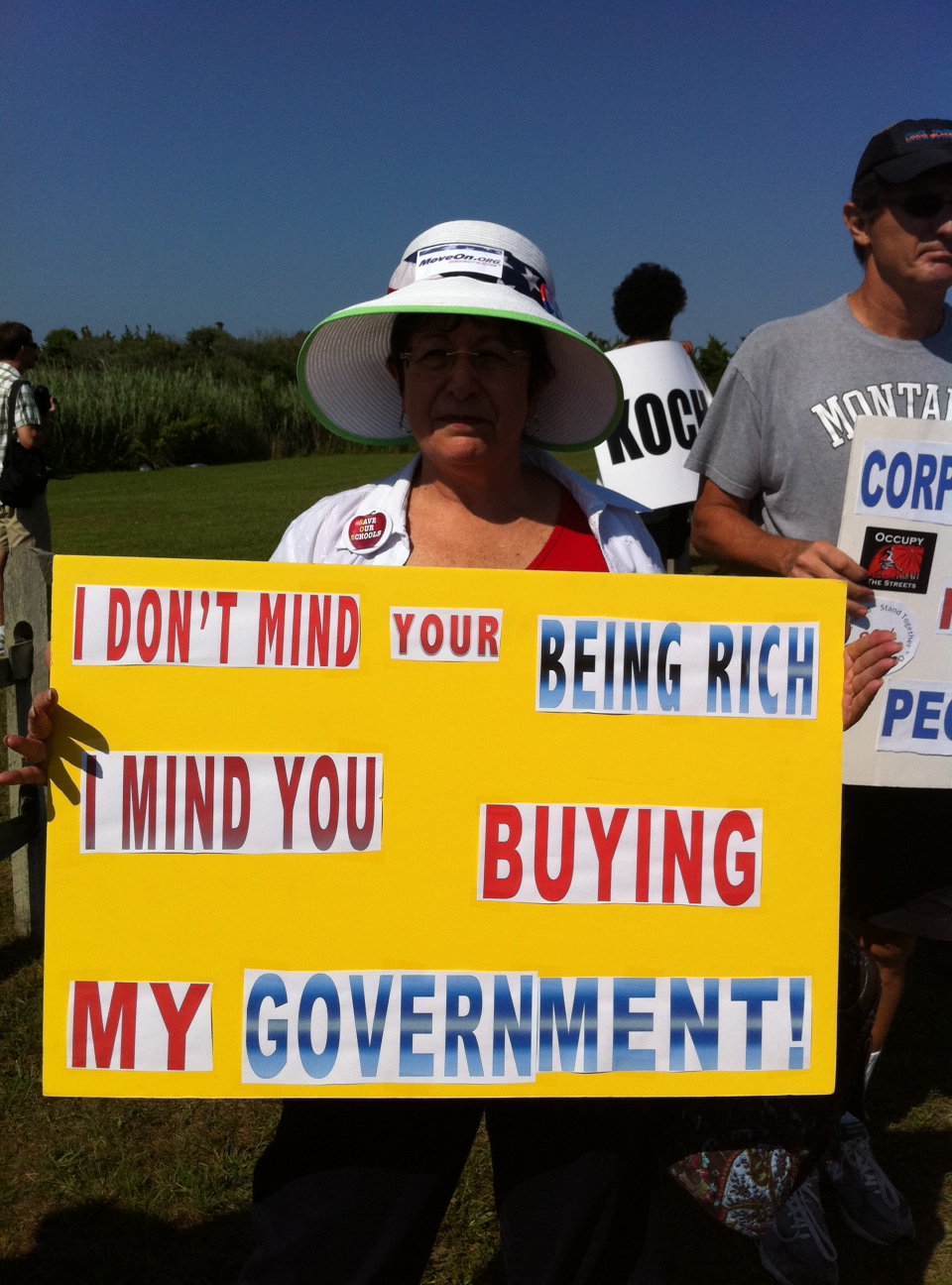 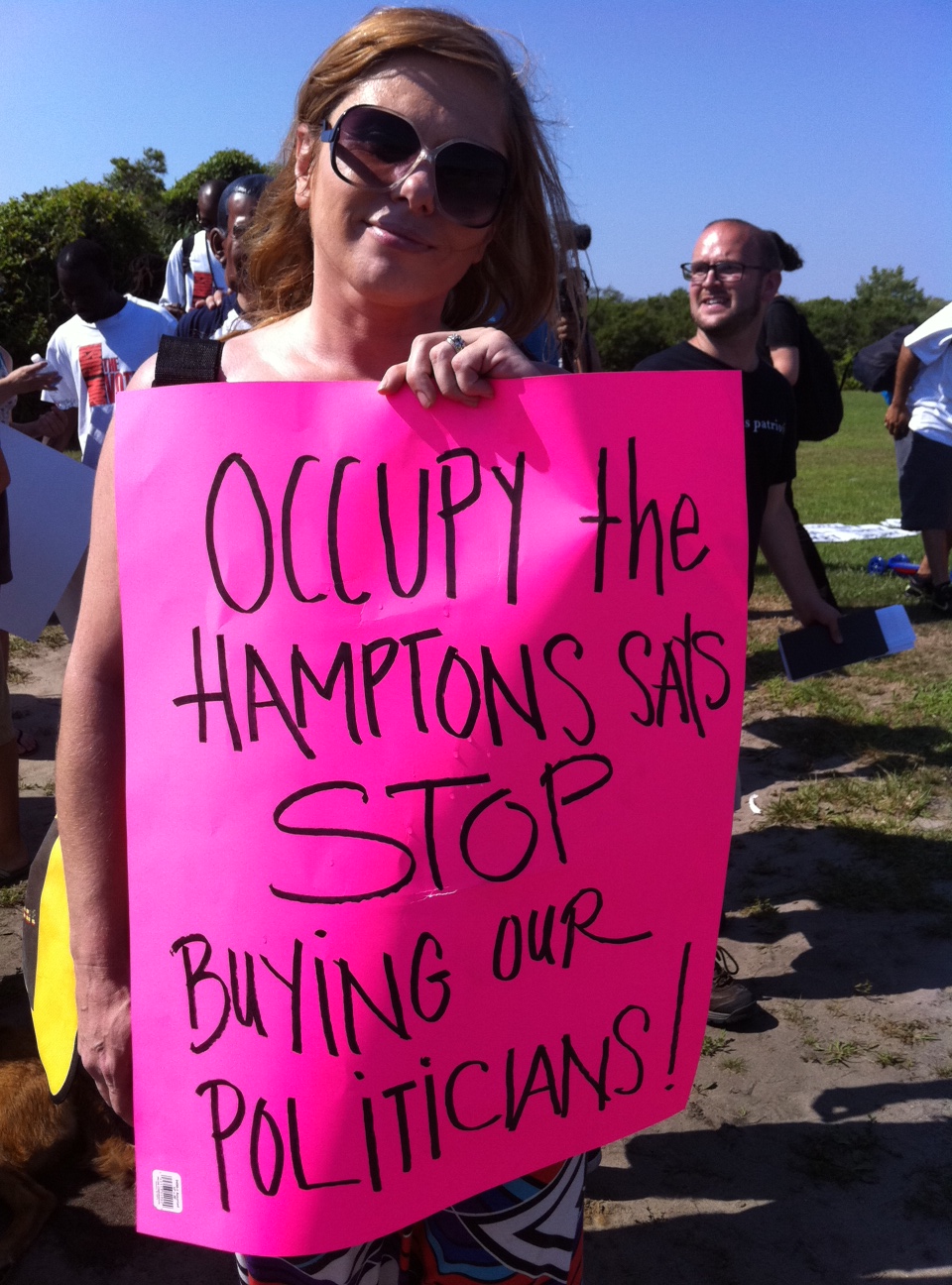 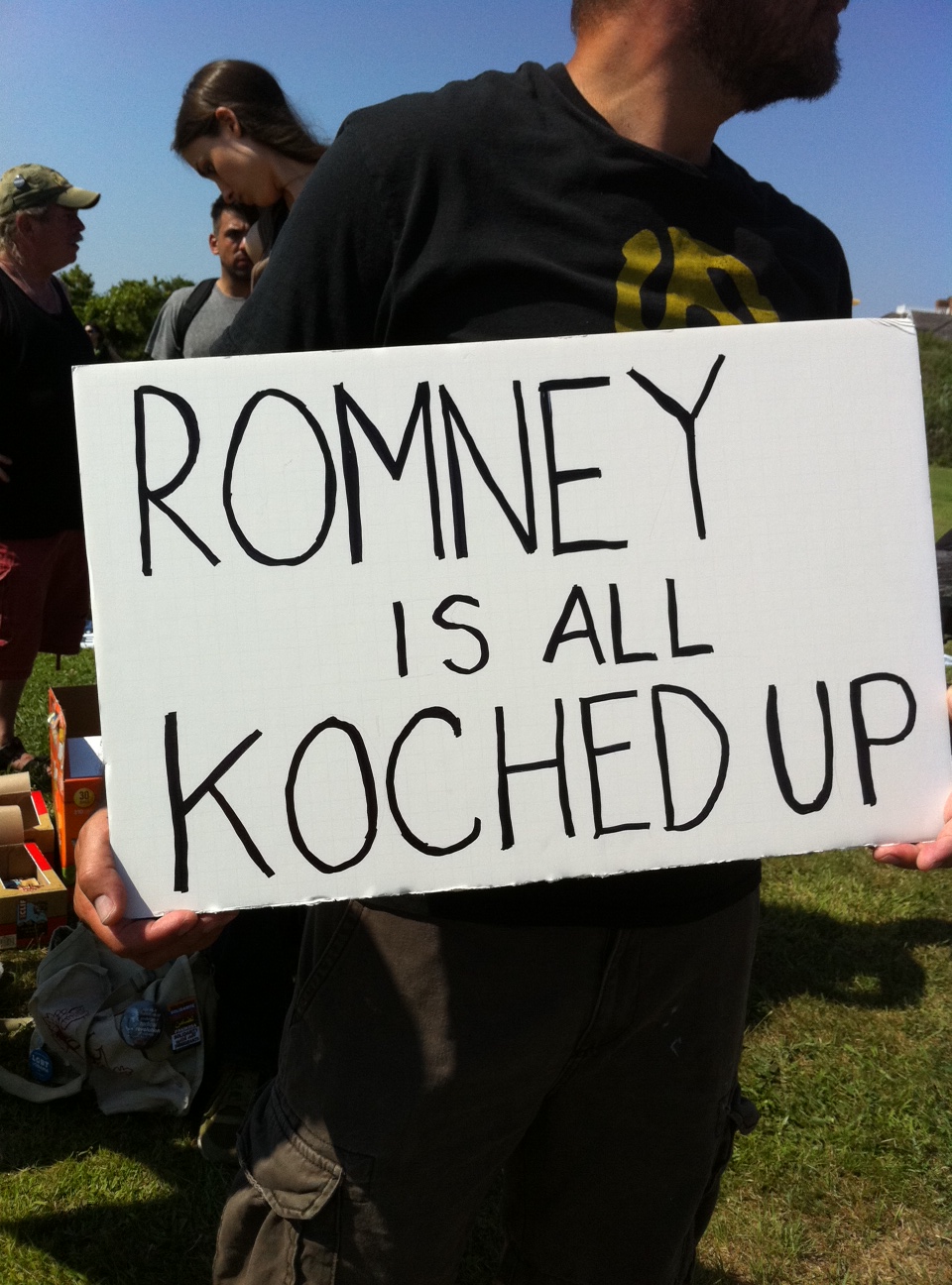 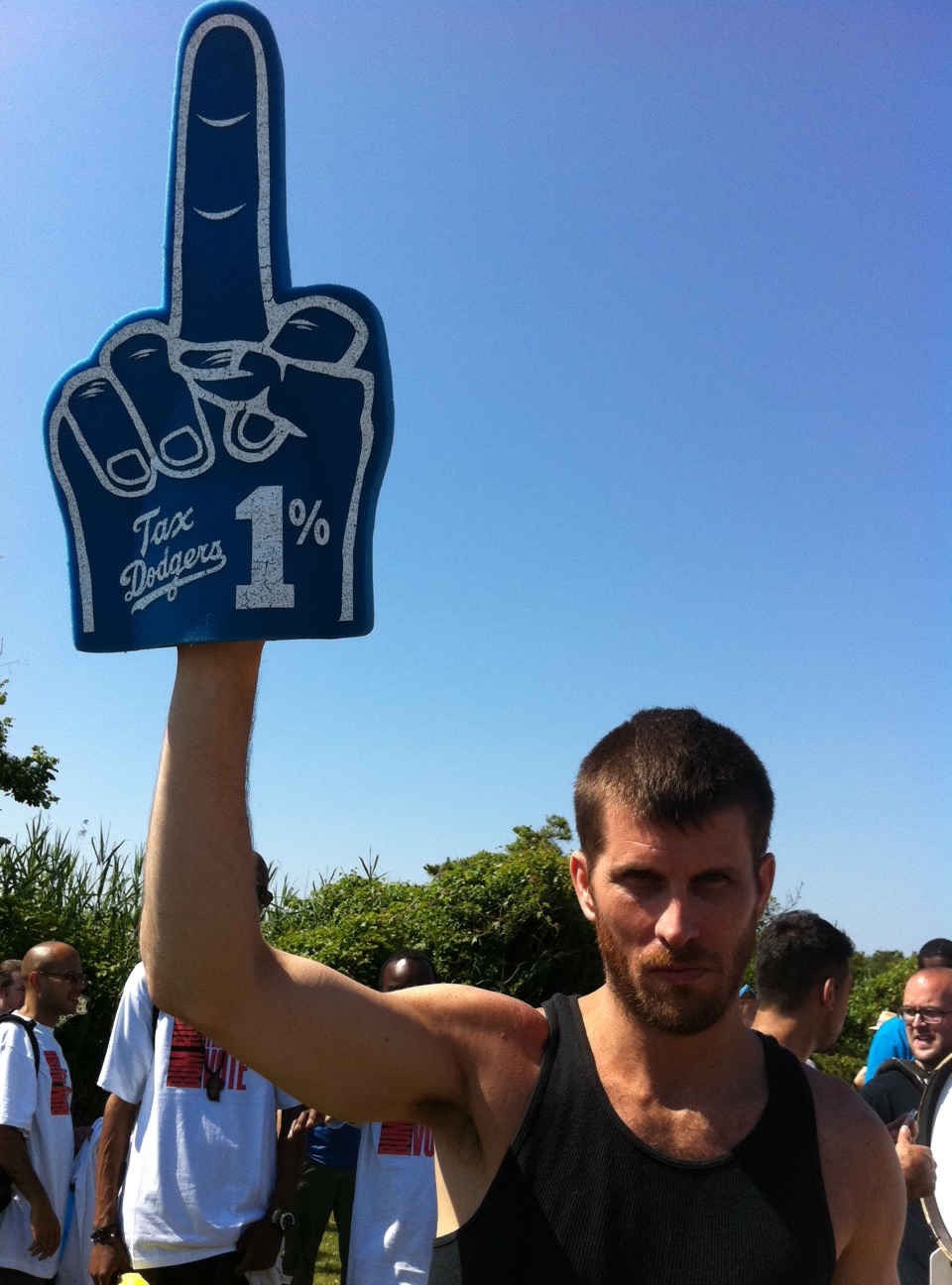 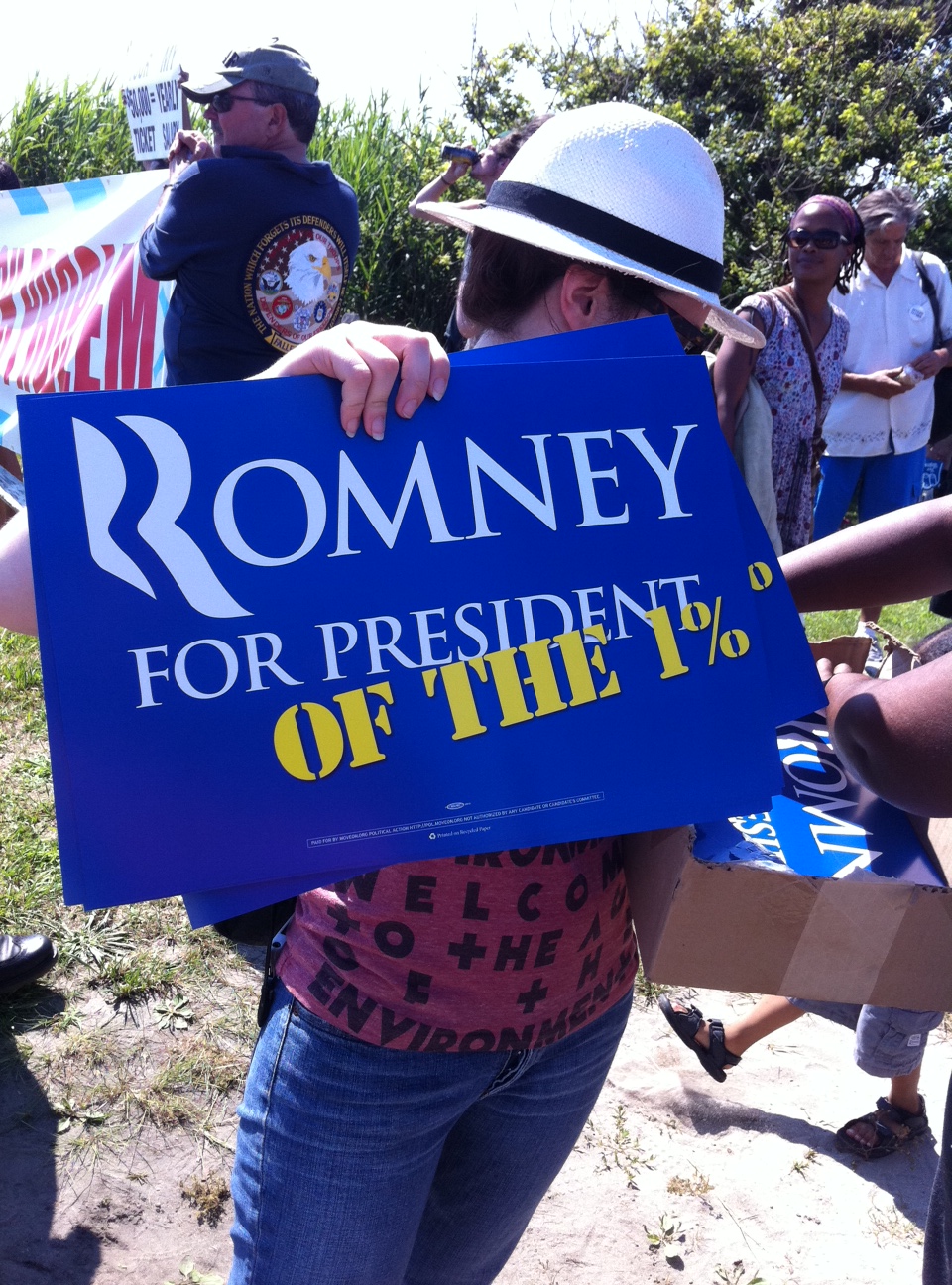 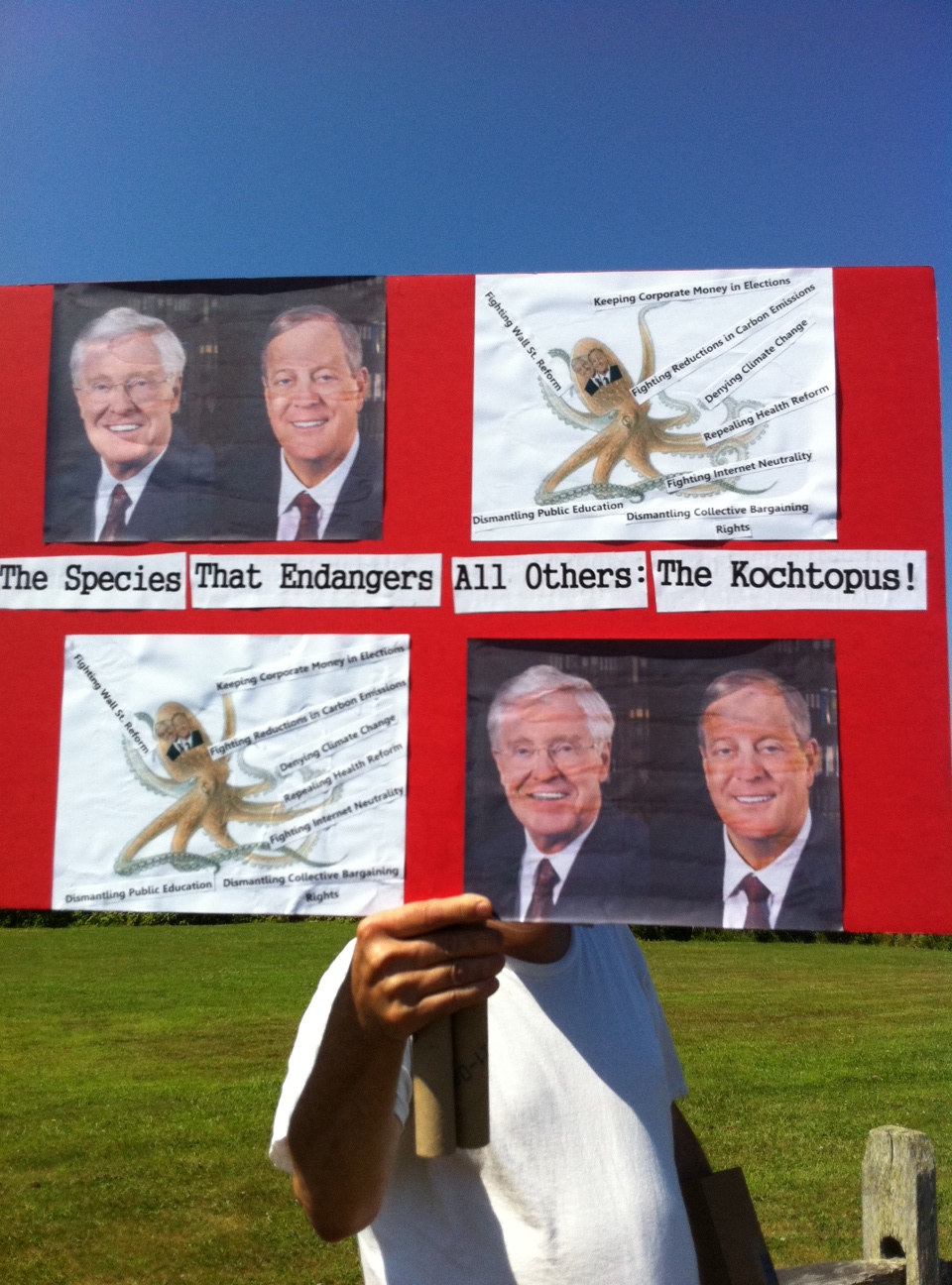 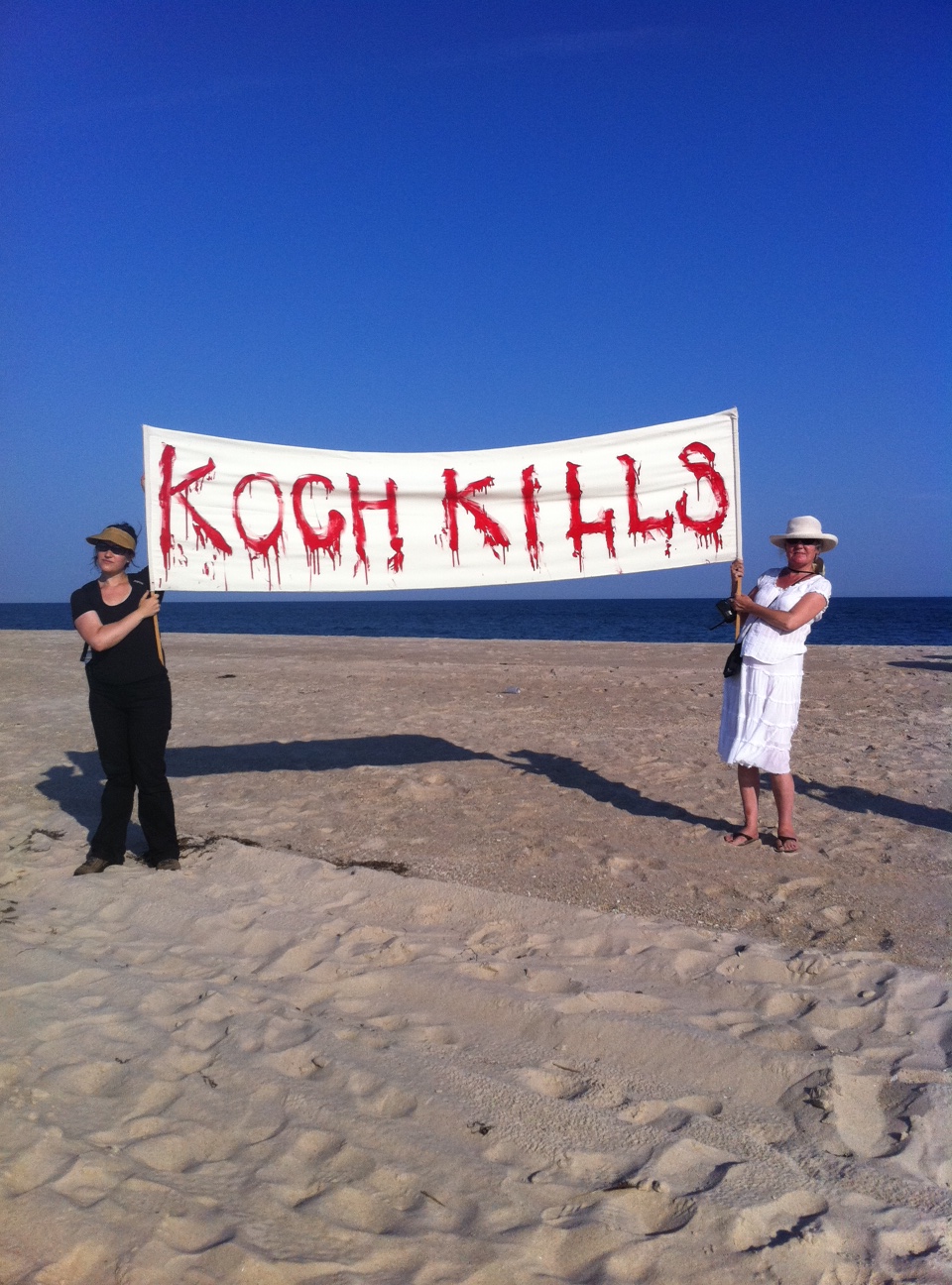 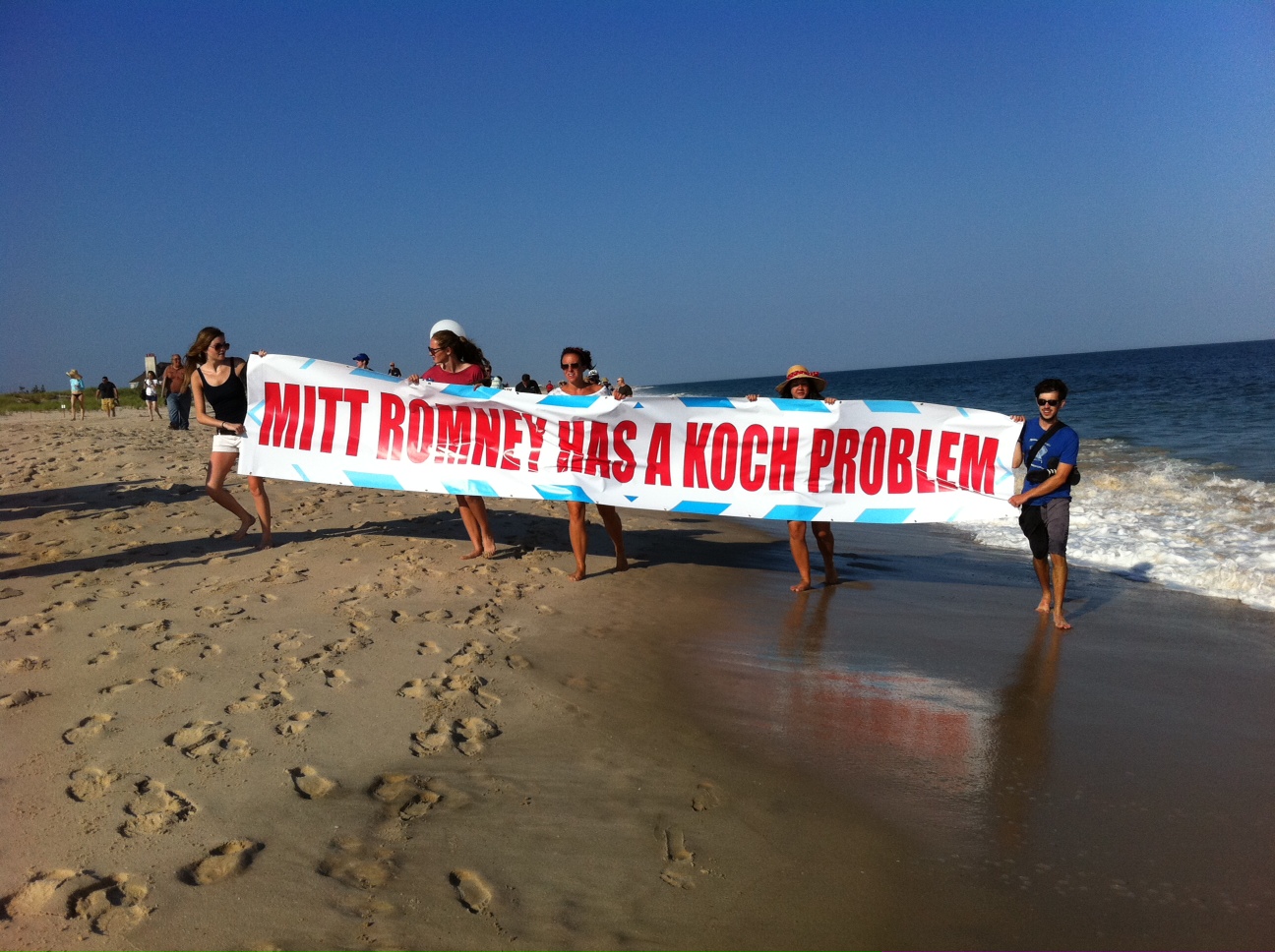 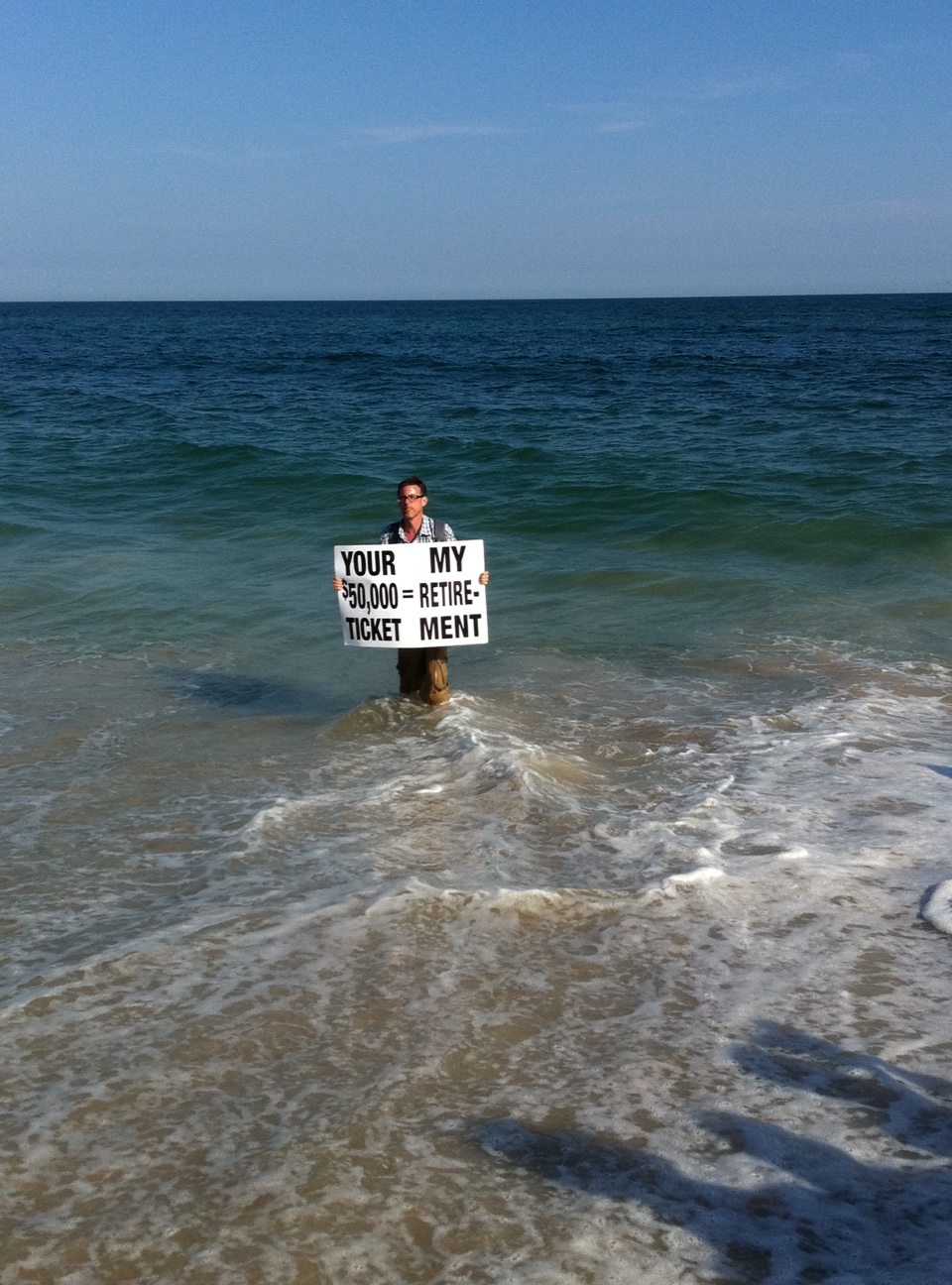 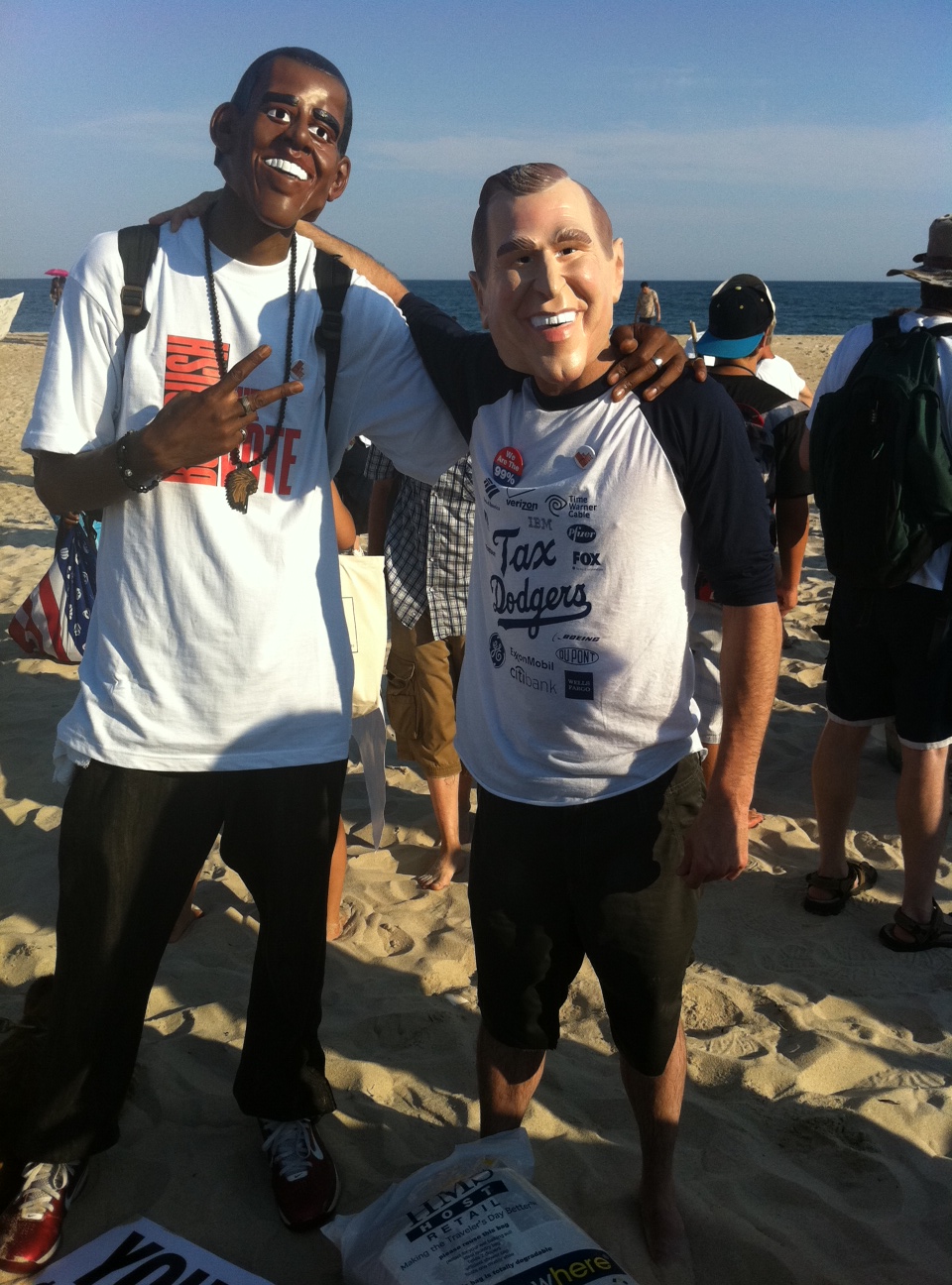 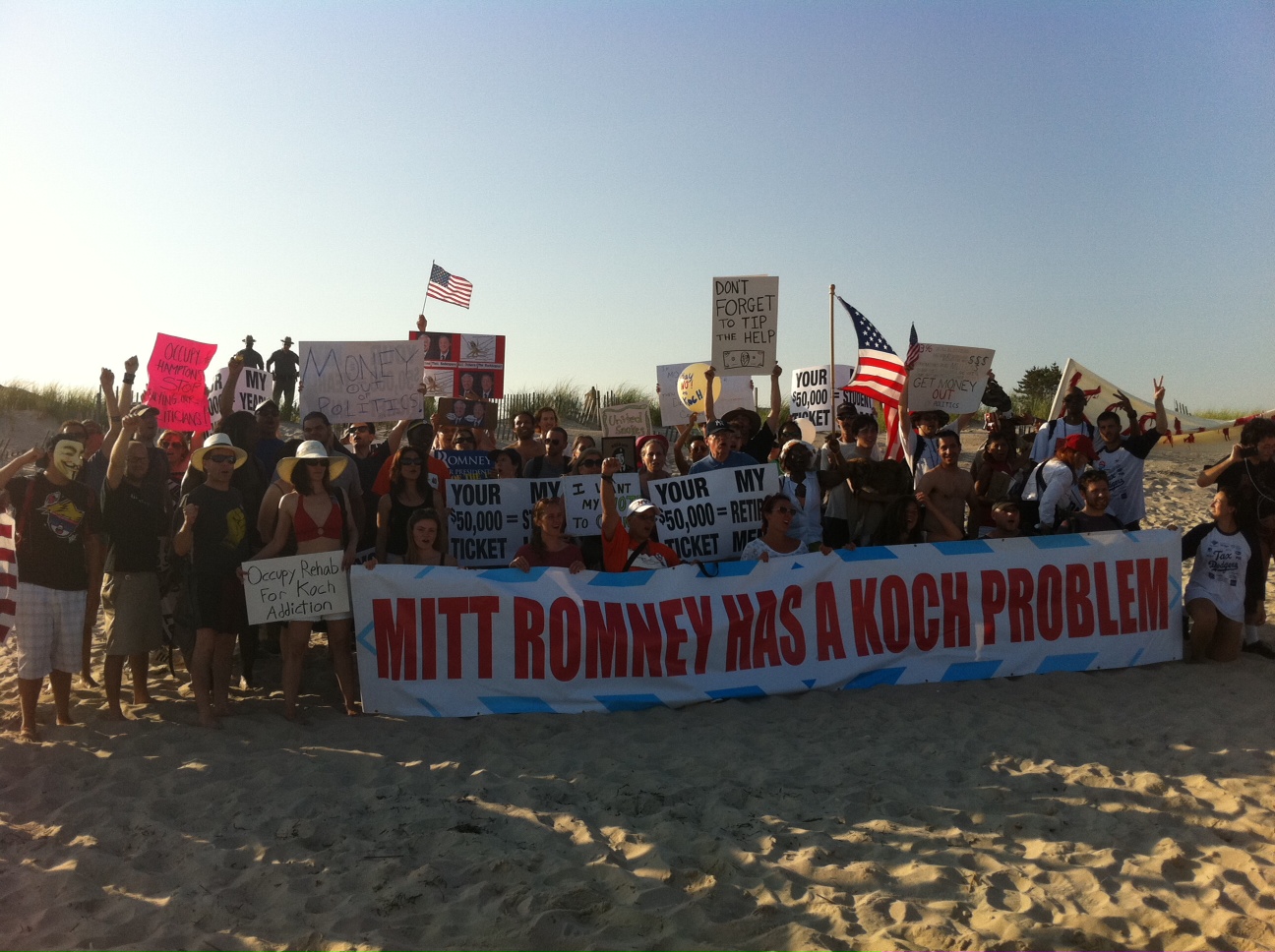 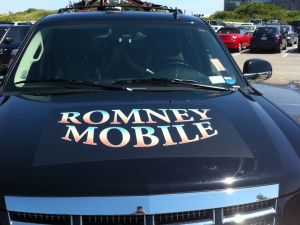 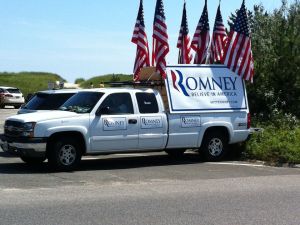 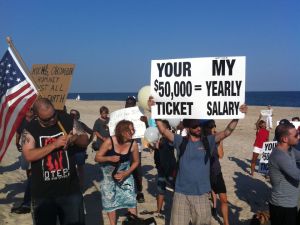 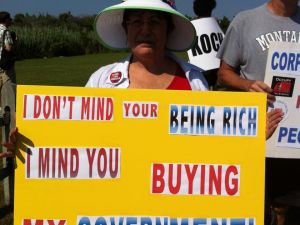 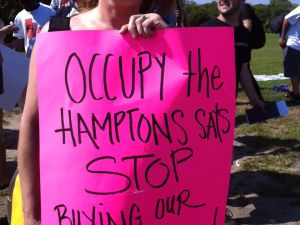 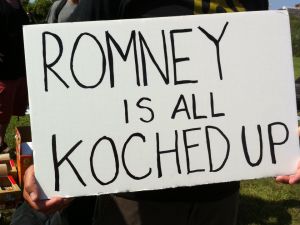 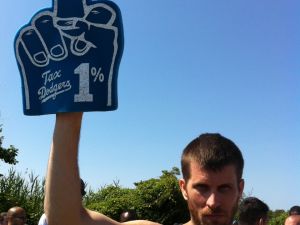 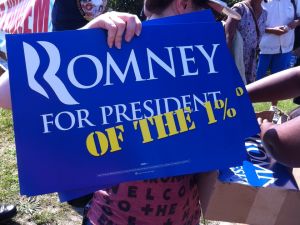 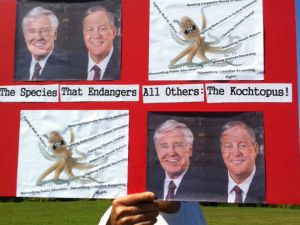 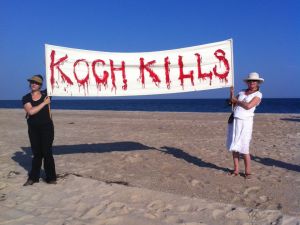 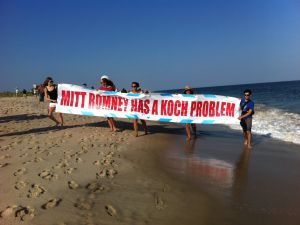 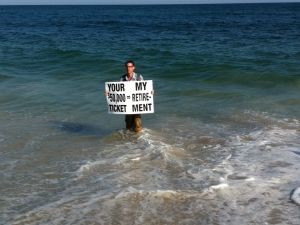 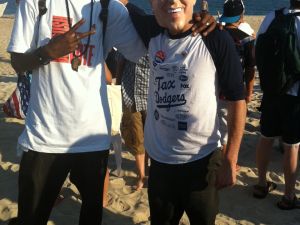 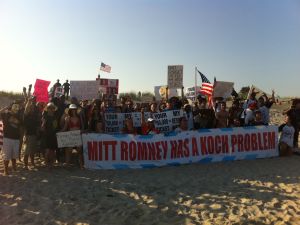 On Sunday, with temperatures hovering around 85 degrees, the Occupy Wall Street movement headed Out East to protest Republican presidential candidate Mitt Romney’s $50,000 a plate dinner at the Southampton home of billionaire David Koch— one of three local fundraisers expected to raise a cumulative $3 million over the weekend.

Shouting “Election for sale” and “For $50,000, you could be a Koch whore too,” the crowd of approximately 150 people assembled with signs and music behind a banner reading “Mitt Romney Has a Koch Problem,” the event’s unofficial slogan. A similar banner was flown above the nearby beach, towed behind a MoveOn-commissioned plane. That organization also brought its Romney Mobile, complete with fake dog strapped to the roof and company logos such as UBS and Bain Capital Ventures on the side.

More than an anti-Romney protest, the focus was on Koch and the influence of wealth on the electoral system. Signs read “Romney is All Koched Up” and “End Corporate Personhood” while a balloon was scrawled with “Romney = Koch Sucker” (the protestors apparently wanting it both ways, pun-wise, when it came to Mr. Koch’s surname).

Walker Bragman, 24, a freelance political cartoonist who’s been involved with the Occupy movement a year, brought his dog, Darla. “I got involved with Occupy because the way this country is run now is radically different from how it was run even twenty years ago. Money is the most pervasive force in politics today, and David Koch is one of the worst offenders. There’s something very sickening about that.”

Representing Bum Rush the Vote, George Martinez, who ran for Congress in the Democratic primary in New York’s 7th Congressional district, emphasized that the issue extends beyond partisanship. “We need to get money out of politics,” he said. “When Goldman Sachs are fueling the progressive Democrats, we have a problem, and when the Koch brothers think they can buy elections by moving major pieces of media around, we have a problem on all sides of the spectrum.”

Others took an even less charitable approach. Blogger Gail Zawacki of Oldwick, New Jersey, passed out mock hundred-dollar bills bearing the images of Charles and David Koch with the words “Things Die Better With Koch” and “Blood Money.” Spurred by environmental concerns, she held up a banner bearing “Koch Kills” in red. “Koch Industries kills people literally,” she said, citing air pollution and crop reduction. “No matter how much money you have, it’s not going to protect you,” she said. “David Koch himself had cancer, but he didn’t make the connection. He could afford the best of care. If I was a One Percent-er, I’d be thinking about making the world a more equitable place.”

The event was organized by a (seemingly vast) coalition that included Occupy Wall Street, The Long Island Progressive Coalition, Greenpeace, Move to Amend [Brookhaven], ALIGN NY, Art Not War, Strong For All, MoveOn.org, United New York, Occupy Storefront and Occupy Huntington, Long Island, and many protesters were bused free to the Hamptons from Manhattan.

Originally planning to march directly to Koch’s home from Cooper’s Beach, the group was frustrated by barricades blocking the road to the Koch estate.

Undeterred, the crowd chanted and waited for further instructions, greeting cars exiting and entering Meadow Lane with a mix of cheers and shouts of “Buy a vote.” “Get a heart,” was the quick retort to “get a job.”

The group decided to use the public beach to get as close to Koch as they could. “This beats Zuccotti Park,” one said as they trekked through the sand along a largely empty stretch of beach before reaching the back of the Koch home.

With state police looking on, the crowd lightly taunted the onlookers, then cheered as fellow protestor David Intrator played the national anthem on his saxophone.

While the protest didn’t quite manage to “non-violently disrupt” the fundraiser, organizers consider it a success. Reached via email, Danielle Asher, lead organizer of Long Island Progressive Coalition, said, “Today was a wake-up call for David Koch. He is not used to regular people pushing back against his agenda and today he learned we will not be quiet any longer. We may not have billions in the bank but we do have like-minded people across the country who are ready to stand up against his agenda.”

As the protest broke up, and some of the assembled even went for a dip in the Atlantic, we wondered if Mr. Koch—no doubt enjoying his party beyond the hedgerows—heard the wake-up call.