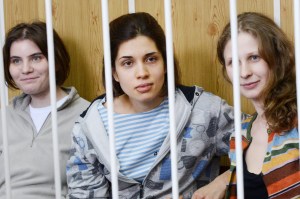 A photo from the trial. (Courtesy Getty Images)

Three members of the performance art punk group Pussy Riot will remain in jail for another six months, a Russian court ruled today. The group has already served five months in pre-trial custody for disturbing a mass at Russia’s main Orthodox church to protest the presidency of Vladimir Putin.

Defense lawyer Mark Feigin said the court’s acquiescence to a prosecution request to hold Maria Alyokhina, Nadezhda Tolokonnikova and Yekaterina Samutsevich until January 13 showed Russian leaders had given orders for their conviction.

“Today’s decision only proves again that our role as defendants here is a pure formality,” Feigin told reporters after the hearing, which was closed to the media.

They face up to seven years in prison.