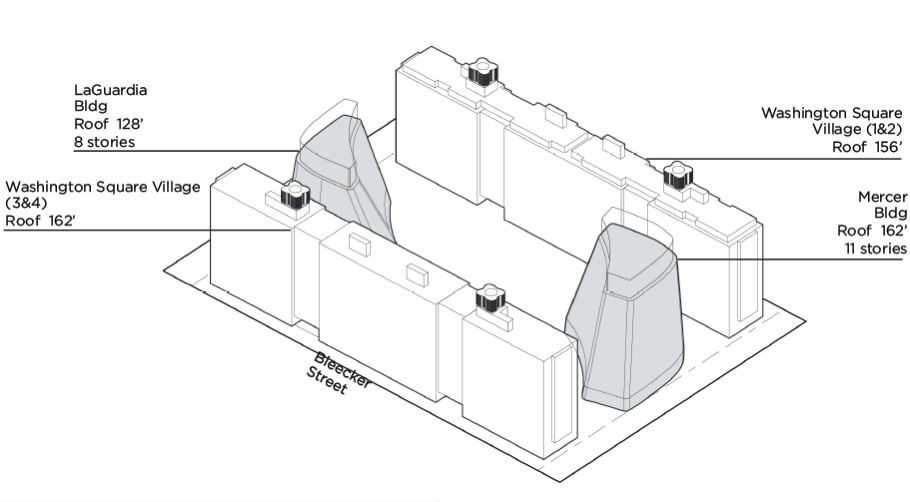 The biggest changes come to the north block, where the "boomerang buildings" were reduced considerably in size.
mchabanobserver 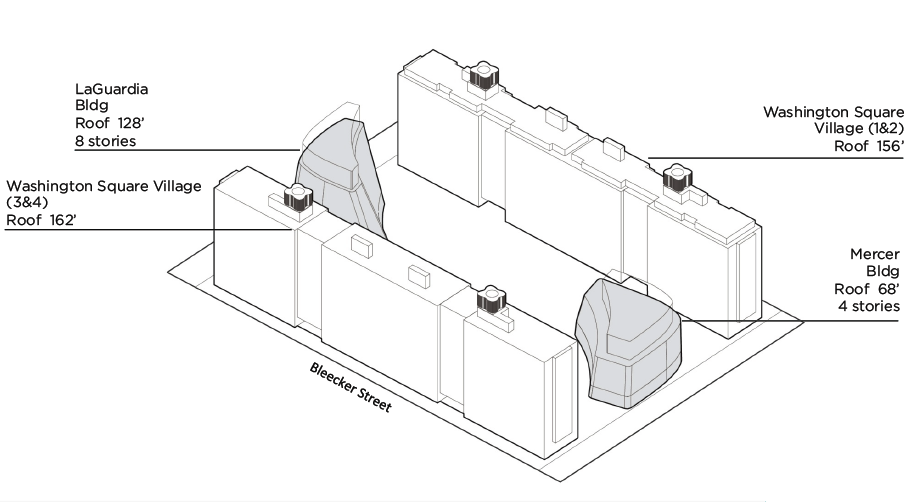 The building along Mercer Street was shrunk from 11 stories to four, while its twin on LaGuardia Place remained at 8 stories.
mchabanobserver 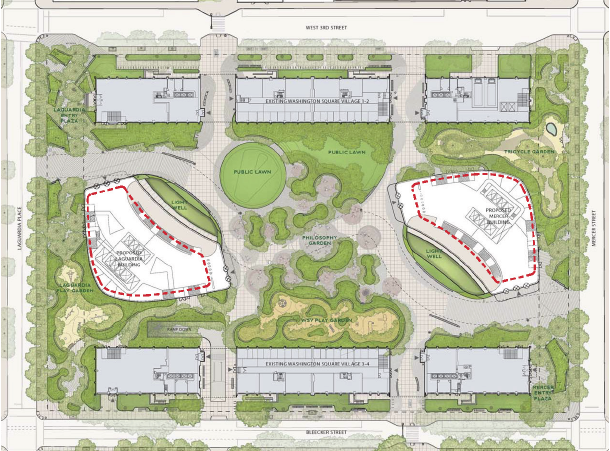 Both had their footprints shrunken, however, creating more room for open space, a major concern within the community.
mchabanobserver 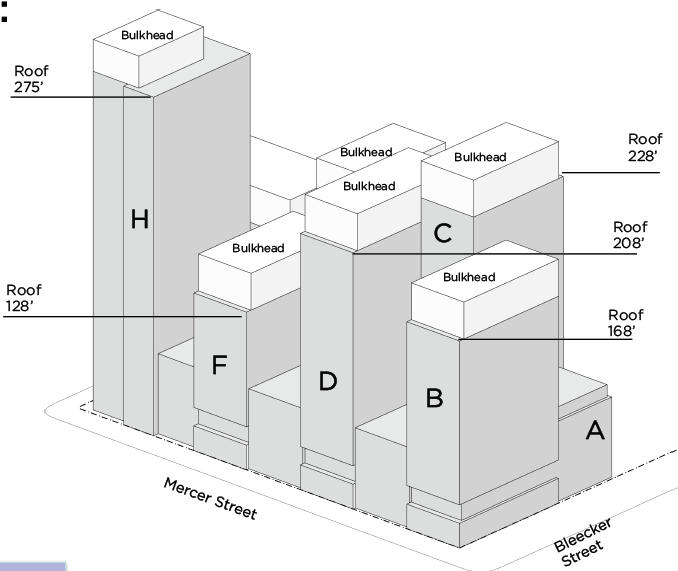 The "zipper building," so called for its unusual shape, is the largest building on the new campus.
mchabanobserver
Advertisement 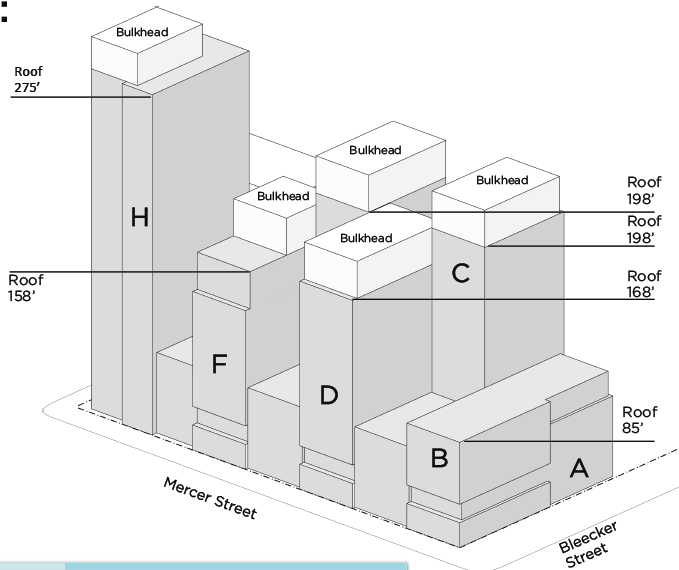 The buildings massing was rearranged and reduced by 7 percent, so it would be taller to the south and shorter to the north, accommodating residents along Mercer and Bleecker streets.
mchabanobserver 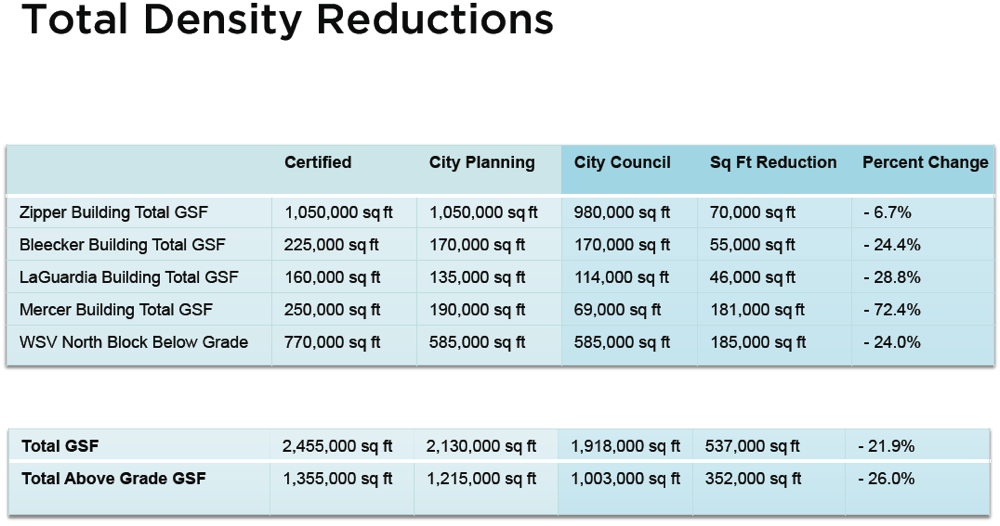 A chart demonstrating the size reductions over the process. (Click to view larger)
mchabanobserver 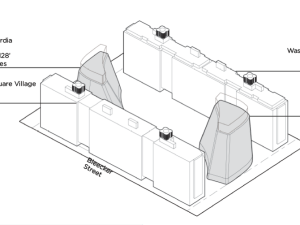 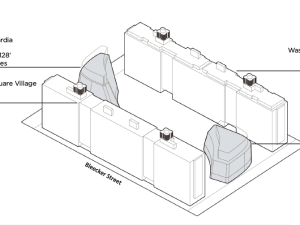 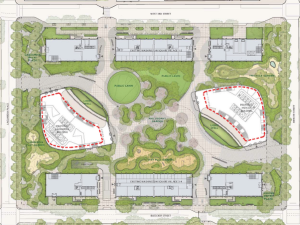 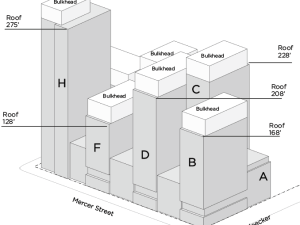 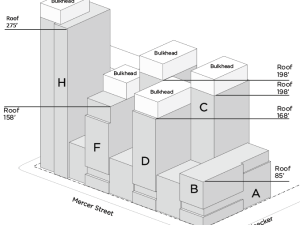 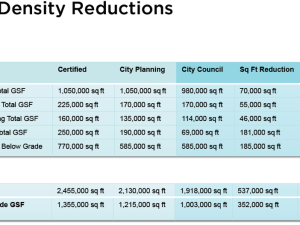 New York University won a huge victory at the City Council today, when it received approval for its somewhat less massive plan to expand its campus in Greenwich Villag, from from 2.5 million square feet to 1.9 million. What does that look like? The university produced some handy visual aids that show exactly that.

Was it enough? Not according to the project’s opponents, two dozen or so of whom showed up at the council this morning to waggle their hands in the face of the assembled pols (cheers, boos and hisses were forbidden, so they were left with jazz hands, like an Occupy protest).

“I’m really disappointed,” Community Board 2 chair David Gruber said after the land use committee voted 19-1 in favor of the modified plan. “I really felt the plans was not modified enough. NYU, with the tacit backing of the mayor, felt they could do whatever they wanted.”

University president John Sexton applauded the plan in a statement, of course, as well as Councilwoman Margaret Chin, in whose district the project lies. “The city’s land use review process is designed to take into account the views of many stake holders and today’s vote demonstrates that this process works,” he said.

Not everyone was in agreement on that count, including a number of the members of the land use committee, who said they did not like the deal that had been reached, but out of deference to Councilwoman Chin, they would support her compromise. Even she seemed to believe it was somewhat problematic. “To be perfectly honest,” she said, “no one got everything they wanted. This was a compromise, but it was arrived at rationally and in good faith.”

Councilman Dan Halloran of Queens said that the entire land-use process needed an overhaul of some sort, as evidenced by the downsides in NYU’s plan. “I hope and trust in Margaret’s good stewardship of her community that this deal does not go awry, but this body should be concerning itself with the bigger issues that have not been dealt with, and that get dealt with piecemeal every time these things come to the floor,” he said. “I would encourage all my colleagues to support Margaret in this but also to look to the future because the city, it’s development, it’s infrastructure is badly in need of a total look by this body and we need to do that sooner rather than later.”

Andrew Berman, executive director of the Greenwich Village Society for Historic Preservation (and would-be councilman), called NYU’s compromise a flat-out mockery. “The changes they made make it less bad, but not enough to make it even remotely acceptable,” he said, adding that his group would be exploring “all options” to challenge the rezoning.

Meanwhile, NYU Faculty Against the Sexton Plan also remained opposed. From their statement: “We are deeply disappointed that our Councilmembers did not listen to the vast majority – the whole community, including NYU’s own faculty, as well as thousands of New Yorkers citywide – who totally oppose this reckless overbuilding plan, which will destroy the character of Greenwich Village, wipe out two precious acres of green space, bankrupt NYU itself, and stick our students with the $6-billion bill.”

Congressman Jerrold Nadler, who represents the area, applauded the changes, but also said that 505 LaGuardia Place, a Mitchell Lama housing complex, must remain so, and the council should continue to negotiate with the university to keep it that way.

The project did garner plaudits from other sectors. Rick Bell, executive director of the AIA New York chapter, which has its offices across the street from the super blocks, as a smart urban plan. “The AIANY is pleased that the revised placement of the LaGuardia and Mercer buildings will lead to greater public access to the adjacent open space next to these structures,” he said. “More people will be able to enjoy the well-designed courtyard and place spaces.”

Perhaps the most interesting commentary of all came from Staten Island. Councilman Vincent Ignizio chastised NYU for its prior work in the Village but hoped this could truly be a break wherein it begins to do better.

“Now the real work begins for the community, and for you, NYU,” he said. “This community clearly has an issue with you, and now is your opportunity to begin a new day and wipe the slate clean and say, ‘We are responsive to them.’ Because clearly what we heard today, whatever you guys do, whether they’re for it or against it, it’s that the community does not believe that NYU has been a good neighbor. You start that rebuilding process today, I hope.”