Mark Oxner, a Republican congressional candidate in Florida’s 9th District, released a campaign commercial online today in which he envisions a dark future where his Democratic rival, Alan Grayson “and his progressive cronies” control the House of Representatives. In Mr. Oxner’s ad, entitled “The Future of Lemonade,” a young girl sits with her grandmother on New Year’s Eve in 2013 going through a photo album displaying pictures of things that have been annihilated by liberals.

“Children used to make lemonade to sell on the street to have fun and make a little bit of money,” the grandmother explains. “Until Alan Grayson and his progressive cronies made it impossible for anyone to start a new business, even little children just having fun on a Sunday afternoon.”

Other things Mr. Oxner’s ad claims “Alan Grayson and his progressive cronies” will wipe out in the next year include hunting (because progressives will have “outlawed guns and ammunition”) and Florida’s tourism industry (because they will have made gasoline “too expensive” causing people to have “stopped traveling to Florida”). The ad ends with text saying “Save The Future” and a photograph showing Mr. Grayson holding a gun to a “terrified voter.”

Mr. Oxner is one of four Republicans running against Mr. Grayson. He previously raised eyebrows with an ad featuring the “U.S.S. Obamaboat,” a ship piloted by the president and powered by slave children with oars.

Mr. Grayson previously served one term from 2009 until last year representing another Florida district. Mr. Grayson ran for another term but was defeated by his Republican opponent in 2010. The newly drawn 9th district is thought to be more favorable to a Democratic candidate than Mr. Grayson’s old stomping grounds.

Update (7:22 pm): The Politicker spoke with Mr. Oxner about the ad and asked whether he thought it was exaggerating things at all. Mr. Oxner rejected the idea and said he was pleased with the clip. 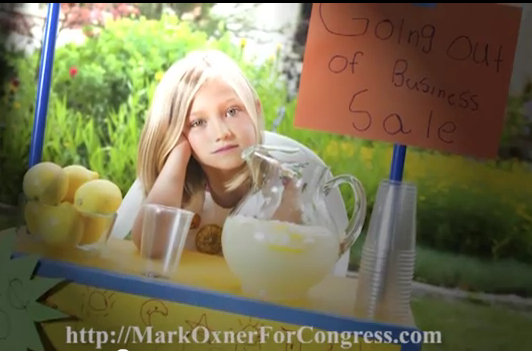