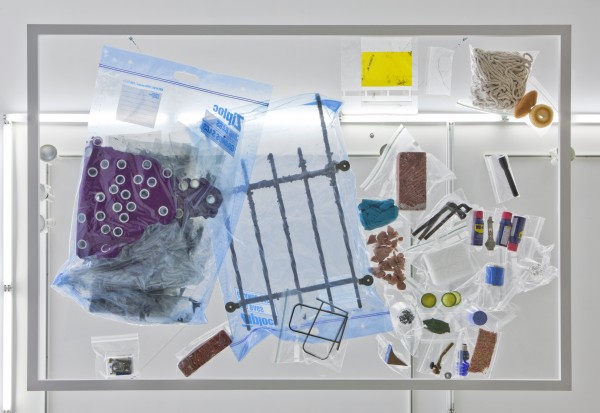 Four wires hold this piece by Sean Kennedy high above the floor of the Untitled gallery right now, in a two-person show with Chadwick Rantanen. This photograph looks directly up through the acrylic glass that serves as the base of the work. (For some context, here’s an installation view.)

There are a handful of other platforms hung throughout the space. A nice minimal one bears elegant vases and vessels, while others go dangerously rococo, with materials piled up on top of one another. But this one nails it, in no small part because the scattered objects are bagged up in plastic like evidence from a crime scene, perhaps a heist of some sort (the security grille, the Maglite, the bricks) or a photo shoot for a food magazine that has somehow gone awry (the fake limes and bread, the candied fennel). At the opening, a gentleman swilling a beer paused underneath it and declared to no one in particular that the only thing missing was “a set of tongs!” Which seems about right.

Viewed through the glass, from underneath, the piece evinces the look and feel of some of today’s most pathbreaking still life photography, the composition-bending, drag-and-drop, chopped-and-screwed work of artists like Lucas Blalock or even Michele Abeles (if only a nude model or two could be propped up there as a tableau vivant). It’s a Haim Steinbach raised aloft and gone digital.

Speaking more practically, Mr. Kennedy’s hanging platforms also offer a perfect solution for collectors that find themselves running out of wall space—which is understandable if they’ve been shopping on the Lower East Side, where galleries are notoriously reliant on painting shows. Just drill a few hooks into the ceiling, Mr. Kennedy offers. Let it hang.